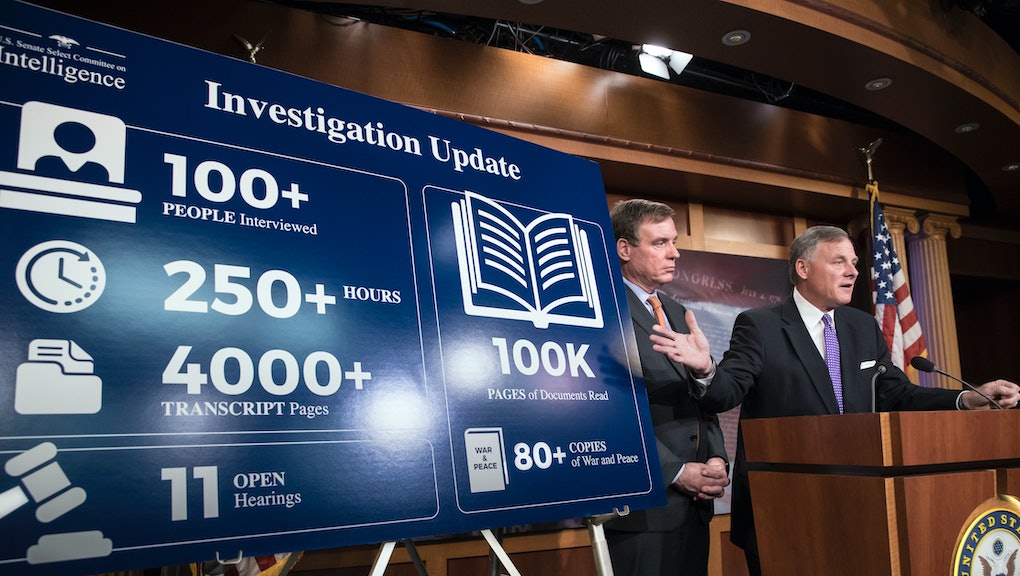 There was a little something for everybody in Tuesday afternoon’s briefing on the Senate Intelligence Committee’s Trump-Russia investigation.

For the “nothing to see here” crowd, the announcement by Chairman Richard Burr and ranking member Mark Warner that their panel has “hit a wall” in its attempt to verify the salacious Steele dossier will likely be pointed to as evidence that suggestions of collusion are, as the president puts it, “fake news.”

But the briefing also provided validation for those concerned over the possibility the Trump campaign participated in Russia’s meddling in the 2016 presidential election, with the bipartisan duo of senators wholeheartedly backing the intelligence community’s assessment of Kremlin interference and saying the “issue of collusion is still open.”

Here are the main takeaways from Burr and Warner’s press briefing Wednesday on the Senate Intelligence Committee’s Russia investigation:

Burr and Warner’s Trump-Russia probe is the real deal

Special counsel Robert Mueller’s FBI investigation has long been regarded as the headliner among the four major probes into Russian election interference and alleged collusion with the Trump campaign.

But on Wednesday afternoon, one was left with the impression that the Senate Intelligence Committee is conducting its own formidable investigation — perhaps one more capable than previously thought.

Burr, a Republican from North Carolina, and Warner, a Democrat from Virginia, told reporters their panel has conducted more than 250 hours of interviews, reviewed 100,000 pages of documents and confirmed the intelligence community’s conclusion that the Russians interfered in the 2016 presidential election.

“We are going to get the best view of what happened that anybody could possibly get,” Burr said.

Still, the senators suggested it may be a while before they can answer perhaps the biggest question of all: Was Trump or anyone on his campaign in cahoots with Russia during the campaign?

“The committee continues to look into all evidence to see if there was any hint of collusion,” Burr said, adding the panel has yet to find a “hint” of proof that Trump officials worked with Russia to get him elected.

Part of the reason that question has been difficult for the panel to answer is because Christopher Steele — the former British intelligence officer who authored an explosive dossier alleging Russians had compromising information on Trump and had worked to get him into the White House — has not been responding to requests to meet with the panel, Burr and Warner said.

While they have been able to verify elements of the report — which included the lurid allegation that Russians have video of Trump receiving a “golden shower show” on a bed where former President Barack Obama and first lady Michelle Obama once slept — the committee has “hit a wall” without Steele’s cooperation, according to Burr.

The panel is also in the early stages of reviewing the more than 3,000 Kremlin-linked Facebook ads the social media giant gave investigators earlier in the week and is awaiting further information from Twitter and Google.

Issue of Russian interference is ongoing

That all could frustrate Burr’s previously stated goal of wrapping up the committee’s investigation by the end of 2017, he said.

The panel will continue to review the Facebook ads investigators believe Russians used in a broad misinformation campaign in 2016, conduct interviews on potential collusion between Trump and the Russians and compel Steele to appear, according to the top two committee members.

In the meantime, the senators said, the Kremlin is likely to continue its efforts to interfere in upcoming U.S. elections and to attempt to “drive chaos and division in our country.”

“I recommend every campaign and every elected official take this very seriously,” Burr said.

The chairman told reporters he still hopes to finish his investigation ahead of the 2018 midterms.