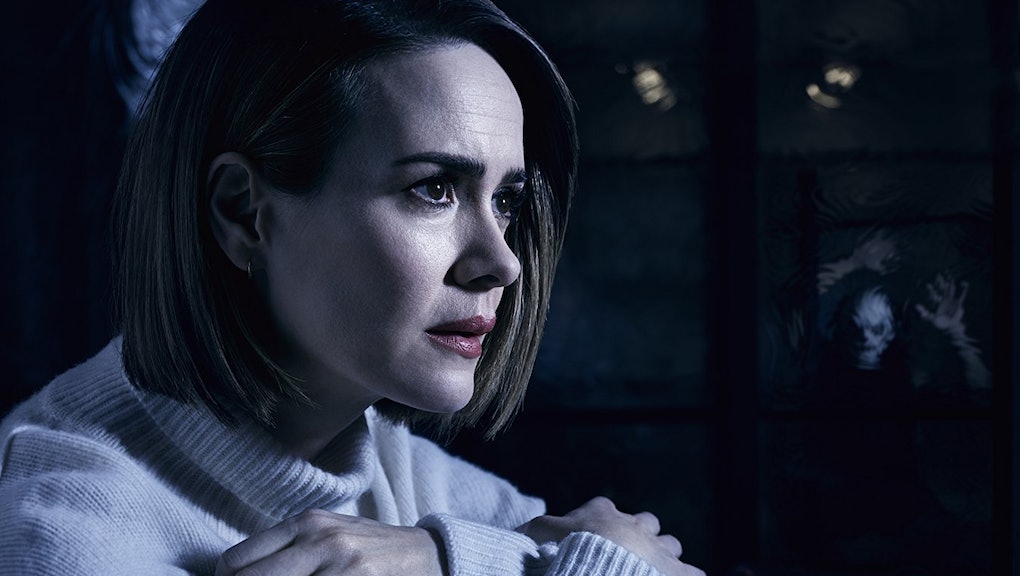 Fans of American Horror Story knew, based on Ryan Murphy’s statements throughout the year, that the anthology series’ seventh season, subtitled Cult, would focus on, or at least be inspired by, the 2016 election — they just weren’t sure how. And it certainly wasn’t obvious that liberal white women (even those who are queer) would be one of the show’s primary targets of mockery and critique.

There were definite hints in the first two episodes that protagonist Ally (Sarah Paulson) might not be the progressive, anti-racist ally she claims to be. After all, she voted for a doomed candidate, Jill Stein, in a swing state (Michigan), thus helping to enable — though clearly not as much as the 53% of white women who actually voted for Trump — the election of a man who used racist dog-whistles throughout his presidential campaign. But more recent episodes have made it especially clear that Cult is largely an allegory for the growing recognition of how white women benefit from racial privilege and help to perpetuate white supremacy.

Early on in the season, we learn that Ally (surely a play on the noun “ally”) voted for Stein, which her wife, Ivy (Alison Pill), still holds against her, and which eventually pushes Ivy to take radical action. In episode two, Kai Anderson (Evan Peters) — a Trump supporter, city council candidate and (as is later revealed) leader of a murderous clown cult — knocks on Ally’s door as part of his political campaign, and begins to spout anti-immigrant rhetoric. In her post-election heightened state of anxiety, she comes to the door with a knife, which Kai accusingly questions her about; as he does with virtually everyone he meets, he attempts to exploit her fear. Their exchange is a build-up to the next time Ally opens her front door, when, in her paranoia and anxiety, she instinctively shoots and kills Pedro, one of her Latino employees, without waiting to see who it is.

The fallout from Pedro’s murder is what really exposes this thread about white women’s complicity in institutional racism. Right away, Ally is treated with kid gloves by the white male cop, Detective Samuels (Colton Haynes), who reassures her that Michigan is a “stand your ground” state and that she’ll likely face no charges. He works overtime to justify Ally’s actions, saying they were already investigating Pedro for the murder of another restaurant employee, so it’s no surprise that she saw him as a threat. He says slowly and purposively, “Now, does that make sense?” He’s clearly feeding her a line for her official statement and invoking their shared privilege and racial authority over a person of color.

This scene is also a classic allusion to white female victimhood and the ways that white women are excused for their crimes against people of color, usually by white men. There are countless examples in real life (see: the woman who earlier this year admitted to lying about Emmett Till’s lewd physical advances on her, which led to his lynching death) and in pop culture. In fact, AHS: Cult echoes another horror story released in 2017, but on the big screen: Jordan Peele’s incredible racial satire, Get Out.

While Rose, the white woman in Get Out, actively weaponizes the presumption of innocence that surrounds her, Ally more passively accepts white male protection from accountability for her actions. In one scene, she and Ivy encounter a group of Latino protesters calling for Ally to be arrested for Pedro’s murder and, according to the reporter on the scene, referring to her as a “lesbian George Zimmerman.” Kai appears out of nowhere, justifying her actions and calling her brave for protecting her family.

‘AHS: Cult’ is a clever, if not exactly subtle, satire of white female complicity in the election of Trump specifically, and in systematic racism more generally.

Ally’s encounter with her neighbors, Harrison (Billy Eichner) and Meadow (Leslie Grossman), in the following scene is a classic bit of Ryan Murphy’s signature tongue-in-cheek satire: They knock on her door in stereotypical Mexican sombreros, accusing her of racism and throwing Taco Bell coupons at her to signal white people’s appropriation of Latin culture. Now, few could argue this scene isn’t heavy-handed — it’s a pretty on-the-nose transposition of Twitter arguments between white people who accuse each other of racism while completely ignoring the voices of people of color — but this sort of satire of “benign” white racism is still rare in mainstream media.

Although public focus in recent months has been on the more explicit, violent displays of racism that have arisen since the 2016 election, it’s also important to highlight the often unconscious forms of racial privilege white people engage in, such as believing they can speak for people of color. Harrison and Meadow’s “woker than thou” act is revealed to be a sham when they make homophobic and misogynist comments about a lesbian-headed household needing a man in the house (the “man” being Mr. Guinea, the male guinea pig they gifted to Ivy and Ally’s son).

In the meantime, Ally continues to play the victim, saying to her therapist: “Do you understand the specific pain of someone like me being accused of [racism]?” This type of self-victimization and inability to see oneself as a beneficiary, and even perpetrator, of white privilege is one of the primary critiques of white women by black female writers and social critics (read this Twitter thread by Ijeoma Oluo). Ally decides to try speaking directly to the protesters, and when they surround her car, she counters, “I am one of you!” But when they don’t back down, the facade of ally-ship crumbles as she yells, “Move, motherfuckers!” Kai appears suddenly and the crowd disperses; yet again, Ally is saved from “belligerent” people of color by a white man.

Ally isn’t the only white woman Kai is recruiting, either. He also counsels Meadow, who is justifiably worried that her gay husband doesn’t love her: “Stop saying sorry for anything … Everything is somebody else’s fault from now on.” (Forget “make America great again” — that line easily could’ve been Trump’s campaign slogan.) Ally and Ivy come home to find the guinea pig has exploded in the microwave, inevitably calling to mind (at least for anyone over 35) the classic bunny boil perpetrated by Glenn Close’s character in Fatal Attraction. It’s almost certain that the culprit is Meadow, another scorned woman — but instead of taking her rage out on the person who deserves it (her husband), Meadow terrorizes other women. Perhaps that’s another parallel to the white women who voted for a man who bragged about grabbing women by the genitals instead of a highly qualified white woman?

Of course, Meadow gets her comeuppance, AHS-style, when she is murdered by Harrison (who’s later revealed to be a member of Kai’s clown cult) and his lover, Detective Samuels. However, as Harrison is being arrested, he accuses Ally of Meadow’s murder, making reference to Gone Girl, whose protagonist is yet another white woman who exploits the presumption of white female innocence. The fifth episode includes a flashback from right before Meadow’s murder, revealing that Ally had the chance to help Meadow escape and did nothing: another nail in the coffin of white female solidarity.

One last character who actively weaponizes her white privilege and femininity is Serena (AHS regular Emma Roberts), a young reporter determined to sleep her way to the top and replace veteran black female reporter Beverly Hope (Adina Porter), who’s the only prominent character of color on Cult thus far. On election night, while in line, Serena loudly announces she’s voting for “HRC,” only to enter the voting booth and check the box next to Trump’s name. She’s a stand-in for all of the white women who told pollsters they were voting for Clinton, and then voted for Trump.

On the whole, AHS: Cult is a clever, if not exactly subtle, satire of white female complicity in the election of Trump specifically, and in systematic racism more generally. Ally has been the main target of mockery so far, mostly because she is so ignorant of her white privilege, but Serena and Meadow are also skewered (both literally and metaphorically!) in different ways, and all three have interactions with both white men and people of color that highlight their privilege. Perhaps it’s no coincidence that Lena Dunham will be appearing in episode seven, as she has often been critiqued by women of color both for the lack of diversity on her now-wrapped HBO series Girls and for comments she’s made that display a certain ignorance about her own white privilege.

While AHS: Cult doesn’t do much to de-center the perspectives of white characters — which is a hallmark of how whiteness has been normalized in the U.S. — at the very least, it holds up an unflattering mirror to white audiences, particularly women, illuminating how we participate in white supremacy.