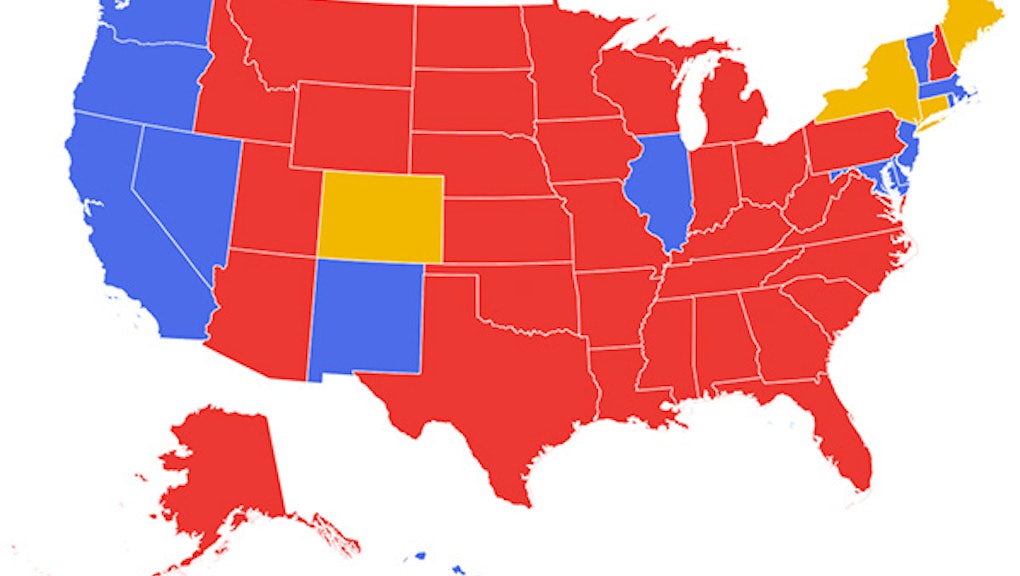 Democrats have lost nearly 1,000 state legislative seats and can’t agree on how to take them back

Every day, we bring you a different dispatch on Trump’s America. Today’s focus: Squabbling.

Friday’s dispatch: In state races, Democrats are not on the same page

New groups aimed at electing Democrats to statehouses are challenging the old guard, creating friction between the party establishment and newcomers with the same goal: take back state legislatures.

Over the past eight years, Democrats have lost about 1,000 state legislative seats nationwide. At Barack Obama’s inauguration in 2009, states as conservative as Alabama, Arkansas, Mississippi and Louisiana had a majority-Democrat state legislature.

Now, Democrats control only 13 statehouses — down from 27 in 2009. The GOP has outright control of 33 legislatures.

The Democratic Legislative Campaign Committee, the official party apparatus that elects Democrats in statehouses, said it has the experience and the strategy to reverse that decline. Groups launched this year, like Flippable and Forward Majority, say they’re needed to help modernize efforts to regain Democrat majorities.

The DLCC sees itself as the organization best positioned to use major gifts and small dollar support to help Democrats win back state legislatures. But critics feel the decline in Democratic power at the state level means the DLCC must be open to new ideas.

“Look at the map in 2009, then look at the map today and look where the status quo has gotten us,” said a Democrat working on state legislative races who spoke anonymously to candidly assess the DLCC’s performance. “This is Uber vs. the taxi industry. The only difference is when you get into a cab, it actually takes you somewhere.”

Some of the conflict is financial: The DLCC says it wants to spend $25 million on state campaigns through 2018, an $8 million to $9 million increase over its 2016 spending. Forward Majority aims to spend $100 million by 2020. The DLCC was launched in 1992. Forward Majority, led by Barack Obama campaign veterans, started last month.

Jessica Post, the DLCC’s executive director since January 2016, said her organization’s involvement has been key to Democrats flipping eight Republican state legislative seats this year, while Forward Majority has “made no financial investments” to-date.

“None of these special election wins were as a result of Forward Majority,” Post said when asked what role outside groups played. “Forward Majority has made no financial investments in races so far.”

Forward Majority plans to spend $1 million in state legislative races in Virginia over the next few weeks, Vicky Hausman, co-founder of Forward Majority, said. Democratic groups are focusing on flipping Virginia, a state with a Republican legislature, as an early test of their strength in the Trump era.

“We always welcome additional resources,” Post said. “But what we don’t need is the duplication of infrastructure. ... Some of [these groups] can do a basic Google search to see what the Democratic infrastructure was and was not.”

But newcomers like Flippable and Forward Majority argue the existing Democratic infrastructure is insufficient.

Catherine Vaughan, co-founder of Flippable, said her organization was formed to convert online grassroots energy into donations to candidates and volunteers for campaigns in state races.

So far in 2017, Flippable has sent $500,000, raised from 10,000 online donors, nationwide to its priority candidates. The group plans in the next month to funnel $125,000 more into statehouse races in Virginia before voting in early November.

“The question remains as to who’s more effective or whether the DLCC will extend into grassroots fundraising and organizing,” Vaughan said. “I’m not seeing that happen right now.”

Vaughan said Flippable focuses on raising awareness among people who would not otherwise care about state elections. The DLCC’s audience “is a little more converted,” she said.

In a recent Florida state Senate race, the victorious Democrat, Annette Taddeo, thanked Flippable and other supporters on Twitter. The DLCC, which also worked on the race, did not get a similar shoutout.

Post said the DLCC has built a digital presence that has led to greater grassroots engagement with candidates. Online fundraising is up 450% over last year. Driven by large donors, the group is on track to raise $10 million in 2017, double what it brought in two years ago, during the last comparable election cycle.

Forward Majority wants to channel millions of dollars next year into targeted races in 12 states. The group’s founders say they aim to complement, not compete with, the DLCC.

That translates to targeting races the DLCC and state parties would not, Hausman said.

“There’s a slate of races that could be winnable, but we’ll never win them the way [the party] is set up today,” she said. That means using data from past races to know whether a race requires door-knocking, texting, social media ads or all of the above, co-founder David Cohen said.

“We want to be additive,” Cohen said. “We don’t need to double down where others are already engaged. We want to expand the field and put more races in play.”

Still, Post made clear the DLCC will lead a Democratic resurgence at the state level. The group has spent more than $1 million in special election races this year and nearly $140,000 already in Virginia.

“For such a long time, we were the ones focusing on this critical level of the ballot when others weren’t,” Post said. “We continue to be the strategic hub and the expert on all state legislative races.”

Today’s question: Do you think establishment groups can help elect Democrats at the state level? Or is a fresh approach needed? Please email us at trumpsamerica@mic.com.

The Trump administration is doing everything it can to sabotage the Affordable Care Act. The Washington Post explains how.

The National Rifle Association said Thursday it supports a review on whether “bump stocks” should be legal in the U.S. That alteration to a semi-automatic gun allows the firearm to shoot automatic fire. It was used by the shooter in Las Vegas who killed at least 58 people and injured more than 500.

People profiled a Las Vegas shooting victim. But Mic could not confirm he exists.

Trump is reportedly likely to decertify the Iran nuclear deal. That means Congress could reimpose sanctions that would make Iran pull out of its end of the bargain (not continuing its nuclear program). But the GOP does not seem likely to pass sanctions.

The popularity of Republicans “is in free fall.”

A top House Democrat called for Rep. Nancy Pelosi (D-Cali.) to step aside as the Democratic leader, a position she has held since 2003.

Must-watch: “64 hours in October: How one weekend blew up the rules of American politics.”

White House chief of staff John Kelly’s cell phone may have been hacked — as long ago as December. Attorney General Jeff Sessions reversed a policy prohibiting discrimination against transgender Americans.

Calling herself “politically incorrect and proud of it,” Marsha Blackburn jumped into the Tennessee U.S. Senate race. Right now, the two Republicans running are both conservatives backed by the grassroots.

The Pennsylvania pro-life congressman, who reportedly pressured his mistress to have an abortion, will resign.

When asked about Trump’s tweets calling for an investigation of “fake news,” press secretary Sarah Huckabee Sanders said news organizations have a “responsibility” to be “positive” about the president.

A college student, who is a member of the National Rifle Association, explains to Mic why she supports gun control laws — and the Second Amendment. Tap or click the video below to watch.