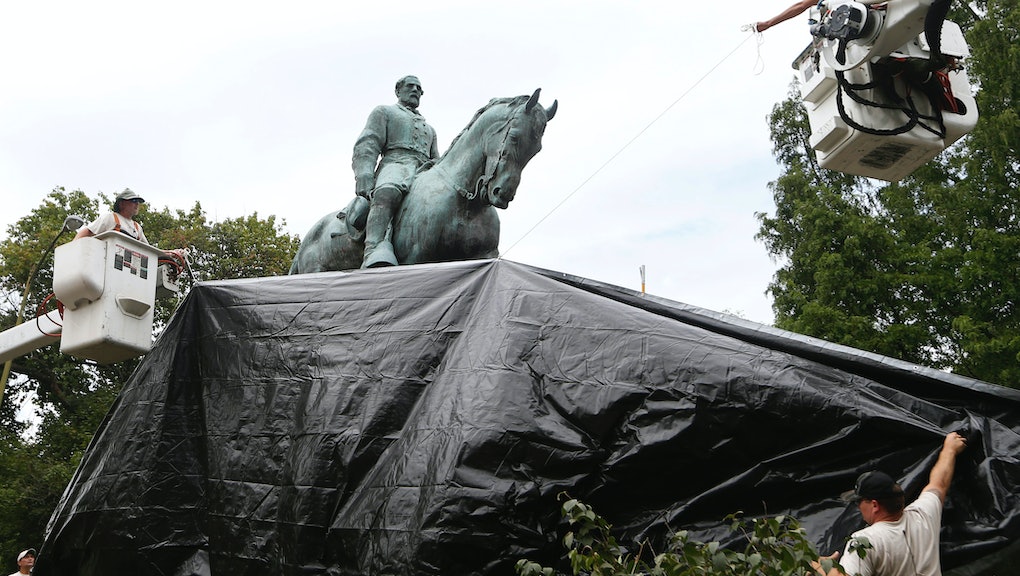 Less than two months after the harrowing violence at the “Unite the Right” rally left one woman dead, white supremacists have once again gathered with torches in Charlottesville, Virginia.

On Saturday night, a crowd of approximately 40 to 50 white nationalists, including “alt-right” leader Richard Spencer, gathered in Charlottesville’s Emancipation Park Saturday night at 7:40 p.m., a statement by city police confirmed.

The group reportedly rallied for five to 10 minutes in the park, chanting “You will not replace us!”, the New York Times reported.

In a video posted after the rally, Spencer dubbed the event an “in and out flash mob” and a “great success,” adding: “We came, we triggered, we left.”

No injuries or major confrontations with counterprotesters took place during Saturday’s rally, Spencer noted in the video.

According to the Daily Progress, local residents concerned about the rally congregated at the Islamic Society of Central Virginia, Congregation Beth Israel and the Rotunda at the University of Virginia to check on the site’s safety in the wake of the white supremacists’ presence.

Members of the UVA community have been pressuring the university, which was founded by former president and slaveowner Thomas Jefferson, to do more to condemn white supremacy in the wake of the Charlottesville rallies. In response to Spencer’s rally, a group of 30 counterprotesters, made up of students and faculty, reportedly also demonstrated in front of UVA President Teresa A. Sullivan’s residence, chanting “blood is on your hands” and “all black lives matter.”

This is the third time that Spencer and other white nationalists have descended on Charlottesville, following a protest at Emancipation Park in May and August’s “Unite the Right” rally on the UVA campus.

The protests have taken place largely in response to Charlottesville’s plan to remove the town’s Confederate statues, which are currently shrouded by black tarps. Though the city voted in April to remove a statue of Robert E. Lee, the New York Times noted, the town was then issued a six-month injunction halting its removal in May, after a lawsuit was filed against the city by the Sons of Confederate Veterans and other individuals and groups.

On Wednesday, a judge ruled that the lawsuit against the statues’ removals can move forward, although they also allowed the black shrouds to stay on the statues, the Daily Progress reported.

“Our identity matters. We are not going to stand by and allow people to tear down these symbols of our history and our people — and we’re going to do this again,” Spencer told the Washington Post about the message behind the group’s protests.

Though Spencer vowed the group will return to Charlottesville for future protests, police said in a statement that they were conferring with Charlottesville’s leadership and the Commonwealth Attorney’s office to determine any legal actions that could be taken in response to Saturday’s protest.

Charlottesville mayor Mike Signer, too, tweeted Saturday that the town was “looking at all our legal options,” condemning the protest as “another despicable visit by neo-Nazi cowards.”

The Daily Progress reported City Councilor Wes Bellamy is aiming to prosecute the protesters under section 18.2-423.01 of the Virginia Code, which rules “any person who, with the intent of intimidating any person or group of persons, burns an object on a highway or other public place in a manner having a direct tendency to place another person in reasonable fear or apprehension of death or bodily injury is guilty of a Class 6 felony” — and could apply to the white supremacists’ tiki torches.

“When white supremacists make odes to white power, and clearly use torches to send a message to our community that they are the superior race while trying to strike fear and intimidate others, they are breaking the law,” Bellamy wrote on Facebook, as cited by the Daily Progress.

Virginia Gov. Terry McAuliffe said on Twitter the state was “monitoring this situation as we continue to oppose these racists and their message of hate,” while other state officials spoke out strongly against the white supremacists’ latest rally.

“There is no home, no place, and no safe harbor in the country I pledged to defend for the ugly hatred we saw in Charlottesville tonight. I don’t see two sides or very fine people gathered here and anyone unwilling to call out this evil fails our commonwealth. Donald Trump’s equivocation enabled this to happen again, and Ed Gillespie failed to call on the leader of his party to denounce neo-Nazis and white supremacists,” Ralph Northam, the current Lieutenant Governor of Virginia and the Democratic candidate for governor of Virginia, said in a statement.

“There can be no ambiguity from any elected official: white supremacists are not welcome, and they will not win,” Northam continued.

Ed Gillespie, the Republican candidate for governor, did not immediately respond to Mic’s request for comment.