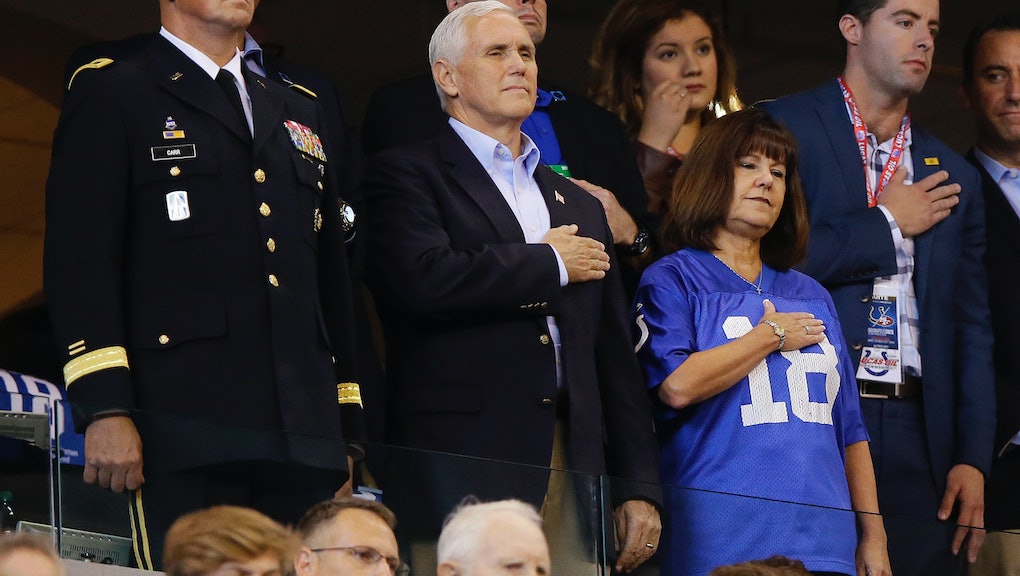 Vice President Mike Pence on Sunday briefly attended then abruptly left an Indianapolis Colts game in a counterprotest against NFL players who knelt during the national anthem. Since the players’ demonstrations took place before kickoff — as they have, like clockwork, for most of the past year — Pence didn’t stay for the game against the San Francisco 49ers. He instead left puzzled onlookers with some tweets by way of explaining.

“I left today’s Colts game because POTUS and I will not dignify any event that disrespects our soldiers, our flag or our national anthem,” Pence wrote, after roughly 20 49ers took a knee during the song. “While everyone is entitled to their own opinions, I don’t think it’s too much to ask NFL players to respect our flag and our national anthem.”

It’s notable that Pence sees the issues the players are protesting against as matters of “opinion.” When ex-49ers quarterback Colin Kaepernick launched the demonstrations in August 2016, he said he was doing so because of racism. Few facts of American life are more strongly supported by data and history — both of which show that black people are disproportionate targets of state brutality, and have been for centuries. Yet Pence has often denied this reality with remarkable conviction. Sunday’s performance is just the latest example of his disdain for much of modern black civil rights protest, and the issues it aims to address.

From all outward signs, Pence’s appearance at Lucas Oil Stadium was a staged and expensive act of political theater. As 49ers safety Eric Reid pointed out to ESPN shortly after, Pence almost certainly knew the 49ers players were going to kneel. This would mean that Pence flew all the way from Las Vegas to Indianapolis for a few minutes of a game he knew he was going to leave almost instantly, only to return to Los Angeles the next day — the L.A. leg of which would have taken less than 90 minutes had he flown straight from Vegas. With the stop in Indiana, Pence lengthened his overall flight time by several hours. The result was a trip that cost an estimated $242,500, much of it taxpayer-funded, according to CNN.

The performative nature of the move wasn’t limited to Pence’s wasteful flights. Shortly before leaving Sunday’s game, he tweeted a selfie with his wife, Karen Pence, with the caption: “Looking forward to cheering for our Colts [and] honoring the great career of #18 Peyton Manning at Lucas Oil Stadium today. Go Colts!” When press images from Sunday’s game were published, however, they showed the Pences in different outfits than they were wearing in the Twitter photo. The Indianapolis Star later pointed out that the image the vice president tweeted was the same he’d shared from a game in 2014.

The artifice of Pence’s demonstration reflects equally his willful ignorance of why the NFL protests are happening in the first place. This is best summed up by Pence’s comments on anti-black police violence during his vice presidential debate against Democratic candidate Tim Kaine in October 2016, in Sunday’s statement and in previous campaign appearances.

“Enough of this seeking every opportunity to demean law enforcement by making accusations of implicit bias every time tragedy occurs,” Pence said during the Oct. 4 debate in Farmville, Virginia, responding to allegations of police racism leveled by Black Lives Matter protesters. At a campaign stop in Colorado Springs, Colorado, the month prior, Pence elaborated by saying, “Donald Trump and I believe there’s been far too much of this talk of institutional bias or racism within law enforcement. In difficult and life-threatening situations, mistakes are made and people have to be held to strict account.”

Black Americans are a population who, after centuries living in the United States almost exclusively as enslaved laborers, endured decades more of Jim Crow segregation and white terrorism in the South. These were augmented by an almost equally segregated existence in the northern cities they fled to. Housing segregation and its resultant poverty were imposed by white-run governments and enforced by white police departments for much of the mid-20th century. The relationship between black communities and law enforcement has since been defined by disproportionate racial targeting — whether in the form of citations used to bankroll city budgets; arrests to bolster America’s jail and prison populations; or state-sanctioned killings conducted under the pretense of police officers’ purported fears of black people. According to a database compiled by the Guardian in 2015 and 2016, the result has been blacks getting killed by police at rates more than double their white counterparts. If this isn’t an indisputable result of racial bias, it’s unclear what is.

Yet Pence’s denial also amounts to a deep betrayal of the people he’s tasked with governing. There’s an amnesiac notion among Americans that the United States has been an ally of black progress, citing as evidence our rise from slavery to something resembling citizenship. This ignores the blood that’s littered the road en route, and the ongoing antagonism that causes racial inequality to persist. If America is to become the free country so many claim it is, it would need elected officials invested in black freedom. This has almost never been the case.

Instead, we have Pence and the rest of the Trump administration, a murderer’s row of racists and white supremacy apologists who would rather cheerlead for a flag than confront the reality that more than one-tenth of America’s citizenry is disproportionately targeted for racist death. To perform as Pence did Sunday is to either deny or willfully ignore the suffering so many people face. It’s the kind of denial that has allowed Americans to turn a debate about racism into a debate about whether the anthem is the appropriate time to draw attention to it (as if there were an inappropriate time to address why so many black people are being killed). Such denial has certainly defined American history. But thanks in no small part to Pence and Trump, 2017 has been a banner year.