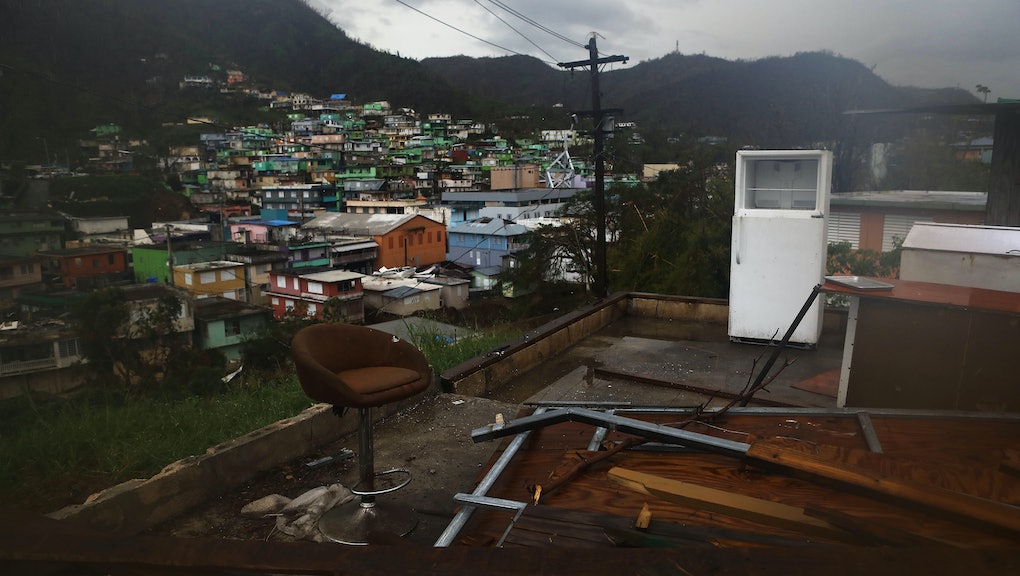 Puerto Rico: How the island is faring nearly 3 weeks after Hurricane Maria

The U.S. territory of Puerto Rico has faced widespread devastation since Hurricane Maria made landfall Sept. 20 — and it won’t be letting up anytime soon.

Despite an influx of federal and private aid, the situation in Puerto Rico still remains dire, with residents facing a shortage of medical resources, clean water and electricity, which is expected to take months to fully restore.

While local and federal governments are making progress restoring services in Puerto Rico, there’s still a long way to go.

According to the Federal Emergency Management Agency, just 11.7% of Puerto Rico had power as of Sunday, while only 56.8% of Puerto Rico Aqueduct and Sewer Authority customers had drinkable water.

Roads throughout Puerto Rico still remain impassible in the wake of the hurricane; only 392 of Puerto Rico’s 5,073 miles of roads are currently open, according to FEMA. Meanwhile, transport coming in and out of the island is more functional, with 100% of airports and federally maintained ports open or open with restrictions.

The Puerto Rican government is reporting that many local services are also continuing to be restored. Ninety-two percent of post offices are currently open, along with 78% of gas stations, 57% of banks and 77% of grocery stores.

Resources remain particularly limited in the island’s more remote areas; the Los Angeles Times reported Friday that according to a local doctor, many towns are currently only accessible by helicopter — resulting in a shortage of supplies and services that’s beginning to result in a major public health crisis.

President Donald Trump has been quick to praise the federal government’s response to Hurricane Maria — and while FEMA and other government agencies have been devoting significant resources to Puerto Rico, it’s clear their efforts haven’t been able to match the widespread scale of the devastation.

FEMA reported that more than 19,000 federal staff and military personnel — including more than 1,400 FEMA workers — are currently on the ground in Puerto Rico and the U.S. Virgin Islands. FEMA and other federal partners have distributed resources to the Puerto Rican people, including millions of meals and liters of water; the USNS Comfort, a Department of Defense hospital ship that can treat up to 1,000 patients, arrived in Puerto Rico on Tuesday.

CNN reported Sunday that the Trump administration submitted a request for $29 billion in disaster relief for hurricanes Harvey, Irma and Maria, which the House is expected to vote on by the end of the week — though CNN also cited sources who said they expected additional aid will be needed for Puerto Rico in the near future.

After previously being coordinated by town mayors, relief efforts in the island’s smaller towns are also becoming militarized, the Miami Herald reported Sunday. Under the new strategy, 10 to 20 military officials will be stationed in each municipality and tasked with delivering relief supplies.

Though the federal government initially waived the Jones Act a week after the hurricane hit, lifting restrictions on foreign shipping between U.S. ports, the waiver expired Sunday night and will not be renewed, the Department of Homeland Security announced.

The Trump administration was chastised for not doing more in the immediate aftermath of the tragedy, and the president’s Tuesday visit to the island — during which he threw paper towels at a crowd of Puerto Ricans — was widely criticized.

The Miami Herald reported that Puerto Rican residents and city officials often have wildly different opinions on how the relief effort going, with officials on the ground in Puerto Rico still saying the federal government’s response has not been enough.

“We are grateful for the federal emergency assistance that has been provided so far,” Puerto Rico Gov. Ricardo Rosselló wrote in a letter to congressional leaders requesting an additional $4 billion in federal aid, as quoted by CNN. “However, absent extraordinary measures to address the halt in economic activity in Puerto Rico, the humanitarian crisis will deepen and the unmet basic needs of the American citizens of Puerto Rico will become even greater.”

San Juan Mayor Carmen Yulín Cruz, whose outspoken criticism of Trump has repeatedly drawn the president’s ire, had even harsher words about the lack of federal assistance. On Sunday, Cruz tweeted that it was becoming “increasingly painful to understand the American people want to help and the U.S. [government] does not want to help. She also criticized FEMA for not responding to a request for support for a San Juan hospital that lost power.

In response to Cruz’s tweets asking for more federal assistance, FEMA director Brock Long told ABC News: “We filtered out the mayor a long time ago. We don’t have time for the political noise.”

With the federal government’s assistance often falling short, the island has also relied on the generosity of private donations. Private companies and individuals have flown and shipped supplies to Puerto Rico; one survivalist in New Jersey donated 80 barrels of food he spent decades collecting to two Puerto Rican towns. Google has also joined the relief efforts, providing balloons that will deliver cell phone service to the island until existing cell towers are restored.

Though distributing this influx of supplies remains a challenge, given the numerous impassible roads and poor communication services, Puerto Ricans have remained grateful for the outpouring of support.

“How do I feel? The world has heard our cry for help and has responded with one voice. We are not being forgotten,” Puerto Rico resident Benjamin Puente Nelida Trujillo told USA Today upon seeing a private delivery of supplies.

Effects of the devastation

The lengthy recovery efforts in Puerto Rico mean the ongoing devastation from Hurricane Maria is beginning to have widespread and tragic effects.

With an economy that was already in crisis — in May, the government became the first U.S. territory or state to declare bankruptcy — Puerto Rico’s increasing debts mean a potential economic disaster is imminent.

In his letter to Congress, Rosselló warned of a “massive liquidity crisis that will intensify in the immediate future.”

“Financial damages of this magnitude will subject Puerto Rico’s central government, its instrumentalities and municipal governments to unsustainable cash shortfalls,” he said.

The territory’s treasury secretary, Raul Maldonado, warned that if the U.S. government does not provide the island with emergency aid, Puerto Rico will run out of money by the end of October, causing a government shutdown that would halt many ongoing relief efforts.

“If we don’t get the help we need, this will be a national disaster,” Maldonado told CNBC. “We’re not looking for a handout; we’re just looking for some help to get back on our feet.”

The country’s economic output will become even worse by the mass exodus of Puerto Ricans to the U.S. mainland. Thousands of residents have already fled the island, the LA Times reported, while others plan to depart in the near future.

The mass arrival of former Puerto Rican residents is expected to impact “a large number of states as diverse as Florida, Pennsylvania, New Hampshire, Indiana, Wisconsin, Ohio, Texas and beyond,” Rosselló predicted in his letter to Capitol Hill. But those on the U.S. mainland may also feel the effect of Puerto Rico’s devastation through their much-needed medications, many of which are manufactured on the island.

U.S. hospitals are already facing a shortage of intravenous saline solutions, the Washington Post reported. A wide variety of drugs are manufactured in Puerto Rico, including the cholesterol drug Lipitor and treatments for cancer and HIV. The New York Times noted, however, that many companies consider their manufacturing locations to be a “trade secret,” leading to a lack of transparency that makes it hard to know the full extent of the problem.

In a press statement, Food and Drug Administration commissioner Scott Gottlieb said even manufacturing facilities that sustained minor damages had their operations impacted. “New shortages could result from these disruptions, and shortages that existed before the storms could potentially be extended,” Gottlieb warned.

The most pressing disaster, however, is the immediate effect of the storm on the health of Puerto Rico’s residents, many of whom are suffering — and dying — from depleted medical care and basic resources.

According to BuzzFeed News, funeral directors throughout Puerto Rico are reporting far higher death counts from hurricane-related causes than the government is officially counting. The official death toll stood at 39 people as of Sunday, according to CBS News correspondent David Begnaud.

Many Puerto Ricans are hurting indirectly from the hurricane, whether from a lack of medical care or stress-related diseases such as heart attacks, Buzzfeed noted. The LA Times also warned that outbreaks of mosquito-borne illnesses, such as Zika and dengue fever, are expected in the near future.

“Indirectly, there were a lot of deaths,” Misael Peris, administrator of the Jayuya Memorial funeral home in Jayuya, Puerto Rico, told Buzzfeed News. “Because they didn’t have water, didn’t have electricity, because the gasoline shortage, because there isn’t food. ... This situation creates uncertainty and anxiety that can kill you. Especially for people who already had compromised immune systems.”