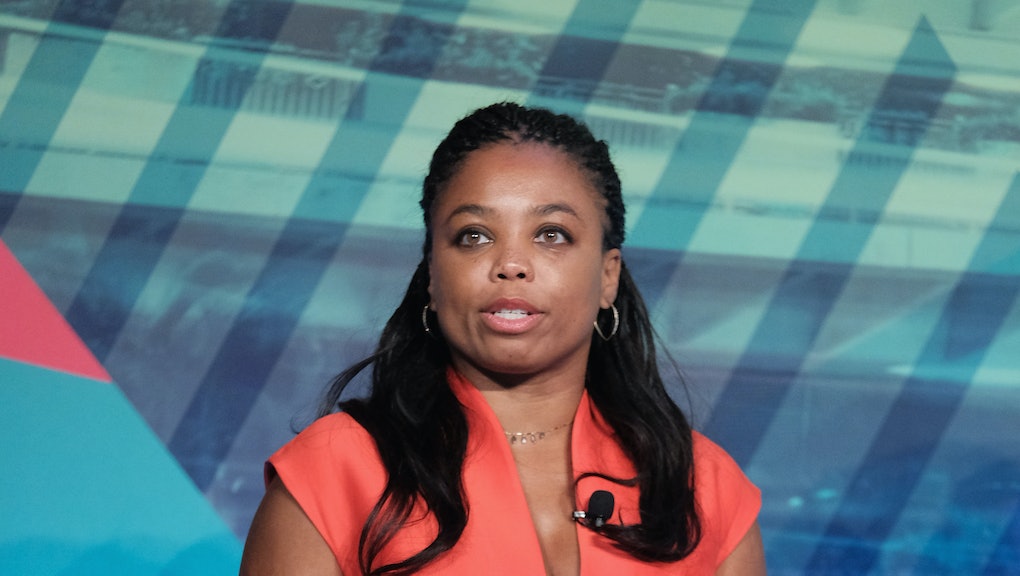 The culture wars energized by President Donald Trump’s election paid dividends on Monday when ESPN announced it had suspended anchor Jemele Hill for two weeks. Hill — one of the network’s few black female on-air personalities — tweeted Sunday that Dallas Cowboys fans should boycott the team’s advertisers if they were angry about owner Jerry Jones’ call to bench players who “disrespect” the American flag.

“This play always [works],” Hill wrote. “Change happens when advertisers are impacted. If you feel strongly about [Jones’] statement, boycott his advertisers.”

Hill clarified the next day that she was not encouraging the boycott — only pointing out that boycotts have proven an effective way for consumers to get what they want. ESPN announced her suspension three hours later. It had been four weeks since Hill drew criticism for calling Trump a “white supremacist,” on Sept. 11, prompting a reprimand from the network and calls from the White House for her to be fired.

“Jemele Hill has been suspended for two weeks for a second violation of our social media guidelines,” ESPN said in a statement Monday, declining to state precisely how Hill had violated its policy. “She previously acknowledged letting her colleagues and company down with an impulsive tweet. In the aftermath, all employees were reminded of how individual tweets may reflect negatively on ESPN and that such actions would have consequences. Hence this decision.”

Monday’s suspension marks the second time Hill has faced public retribution from ESPN for stating the truth. Trump’s statements and policies have provided nigh-indisputable evidence that he is a white supremacist. That he has surrounded himself with white supremacists in his Cabinet is beyond dispute. As is the salience of boycotts — a topic Hill brought up Sunday by way of empowering sports consumers with tools to guide their consumption habits, which is her job.

But more broadly, this is a win for the president and his ideological allies. As I’ve written before, racism and truth have become issues so deeply entwined with partisan politics since the 2016 election that, in many cases, allegations of racism are interpreted as tacit attacks against the right. One can rarely indict a conservative’s bigotry without implicating conservatism as a whole. And by getting ESPN to play their game — rather than accept that Hill’s factual comments are the price of doing business in journalism — Trump and his allies have demonstrated how quickly they’ve gotten entities like The Worldwide Leader in Sports to engage in cultural conversations on their terms.

That Hill was not punished by the network for her September comments was already a sore spot for conservatives, even outside the White House. On Twitter, many compared Hill’s predicament to that of Curt Schilling. The former Red Sox pitcher and ESPN baseball analyst was fired from the network in April 2016 for denying the existence of transgender people and likening trans women to male child molesters in disguise.

“So Curt Schilling gets fired and [Hill] doesn’t?” one user wrote. “What if [white ESPN college football analyst] Kirk Herbstreit tweeted, ‘Barack Obama is a Black Panther who has largely surrounded himself [with] other Black Panthers,’” wrote another. “[He’d] be fired.”

These comments come at a time when conservatives are frequently up in arms about free speech restrictions. Trump’s rise has coincided with a growing belief that so-called political correctness has spiraled out of control. The then-candidate’s willingness to “tell it like it is” was seen as one of his most attractive qualities by voters. (“Telling it like it is,” of course, generally meant having free reign to insult women, people of color and other minority groups without fear of reprisal.)

Conservatives embraced this newfound freedom and expressed outrage whenever bigot-provocateurs like Milo Yiannopoulos were shouted down at college campuses by protesters. The irony that these protesters were also exercising their rights to free speech was lost on the right — as it was when conservatives railed against speech that criticized their president. Trump himself — the purported standard-bearer of anti-political correctness — is in the midst of a weeks-long spat with black football players who kneel during the national anthem before games to protest police violence. He even called for a boycott of the NFL in response — the very thing Hill was purportedly suspended for.

“Wouldn’t you love to see one of these NFL owners, when somebody disrespects our flag, to say, ‘Get that son of a bitch off the field right now. Out! He’s fired. He’s fired!’” Trump said at a September rally in Alabama.

After Hill called the president a white supremacist on Twitter, the most powerful man in America had his press secretary, Sarah Huckabee Sanders, go on national TV and call for the ESPN anchor to lose her job. On Tuesday morning, a shot at Hill was among Trump’s first tweets. All of this because Hill spoke rudely about a man who was elected on the promise that he would make it OK to speak rudely again. As it turns out, that privilege was subject to Trump and his allies’ whims. And they have so manipulated the terms of the dispute that many Americans have felt compelled to play by their rules.

It was a long time coming. The political party that speaks for conservatives most officially is the GOP. Its politicians — at both the national and local levels — have long weaponized racism and encoded it in their DNA, whether by rallying segregationists to their cause with cries of states’ rights during the mid-20th century, fueling Trump’s “birther” campaign to delegitimize the first black president in the 2010s or mounting a proxy war against so-called “voter fraud” that has resulted in black people losing the franchise by the thousands. Republican voters and more flagrant white supremacists have united in their goal to preserve a status quo defined by white social dominance. And they have done so while managing to convince other Americans that race has nothing to do with it.

The result is a standard whereby some Americans think calling the president a racist — citing no more than his openly racist behavior — is an act of political mudslinging rather than a statement of fact. ESPN has taken this illogic to its extreme, conducting itself on Trump’s terms to the point that actual anchors are being punished in no small part due to the absurd standards the president and his camp have set. It would be embarrassing for the network were this position not endorsed by so many outside of it. Even today, some pundits on the left perform mental gymnastics to assure Americans that racism wasn’t central to Trump’s election.

This is one of the great successes of Trump’s rise. It has forced Americans to have debates about race and equality on his terms. These terms were not invented by Trump. They are terms rooted in white fear and resentment, and have coursed through America’s veins for centuries. But coming off the heels of the Obama presidency, there was the misled sense that the views they expressed were marginal, confined to the right-wing fringes of society. Mere months later, they are now the position of the White House. And they’ve forced ESPN to punish an anchor for sedition for expressing what, under different circumstances, would be considered the uncontroversial truth.