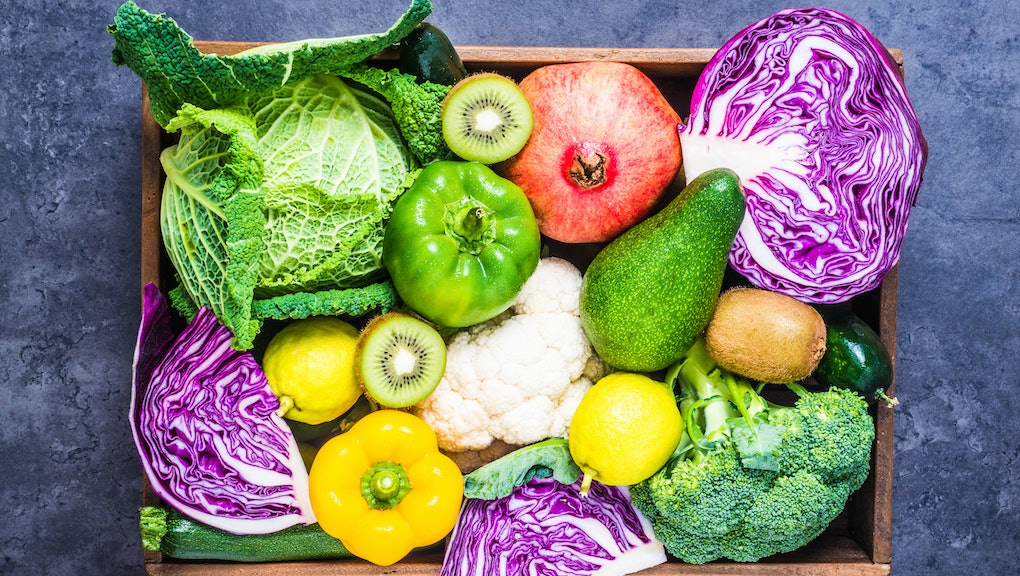 Healthy eating guidelines from food pyramids around the world

In 2011, the U.S. food pyramid received its first-ever makeover since its creation in 1992. The triangular diagram, which was originally built on a foundation of bread, crackers and cereal, was replaced by a quartered circle called MyPlate, which emphasizes vegetables and grains equally.

While the design is an improvement from its past incarnation, it’s not necessarily doing its job of showing what Americans should be eating. More than 36% of U.S. adults are obese, according to the Centers for Disease Control and Prevention, and only 1% of Americans eat the recommended serving of vegetables (two to three cups per day). It probably doesn’t help that this nation has identified pizza as a vegetable and the most consumed “vegetables” are consistently tomatoes and potatoes — often in the form of ketchup and fries. MyPlate does not distinguish starchy vegetables like potatoes from leafy greens like spinach, even though the two serve vastly different nutritional benefits.

The same year MyPlate was introduced, Harvard Health Publishing released a Healthy Eating Plate, informed by nutrition experts at the Harvard School of Public Health. Harvard’s version of food guidelines swaps dairy out for water and adds descriptions to the sections. The “vegetables” category, for example, reads: “The more veggies — and the greater variety — the better. Potatoes and french fries don’t count.”

MyPlate isn’t to blame for the country’s nutritional failings, but its lack of specificity isn’t doing Americans any favors. Historically, the food industry has influenced U.S. food guidelines: The meat industry’s complicated relationship with the government means that meat (“protein” in the case of MyPlate) may always have a place on government-issued food guidelines, despite extensive research on the health and environmental benefits of plant-based diets. This is largely because the meat industry contributes billions to the U.S. economy — an example of lobbyists’ influence on government guidelines.

If the U.S. guidelines are ambiguous, we might benefit from taking advice from other countries that have clearer recommendations on what to eat. Below are nutritional guidelines from places around the world that are worth taking healthy eating cues from.

Belgium debuted a refurbished food triangle in September, and it’s pretty simple to decode: Drink mostly water. Eat mostly plant-based foods, including fruit, vegetables, legumes, beans and healthy fats like olive oil and nuts and a smaller serving of fish, dairy and cheese. The inverted pyramid also advises eating less butter and red meat. Outside of the pyramid is a red circle, with text that translates to “as little as possible.” This section contains sweets, sodas, processed snacks and processed meats and alcohol. “We want to make it clear that we don’t need these products,” a representative of the Flemish Institute of Healthy Living, the creators of the diagram, told Flanders Today. “We don’t forbid them, but they should be rather an exception than rule.”

This rationale makes sense: In 2015, the World Health Organization added meats like bacon, hot dogs and sausages (cured and processed meats) to the list of top tier carcinogenic substances, which already included cancer-causing materials like cigarettes, asbestos and alcohol. Studies have found that processed meats are associated with a greater risk for certain cancers. The average American eats close to 18 pounds of bacon per year. While the U.S. MyPlate doesn’t illustrate processed meats specifically, it might be wise to push them off the plate entirely and consider them “as little as possible” foods.

In 2016, the Dutch government issued a recommendation different from anything in the past: Consume no more than two servings of meat per week. The approach came after the government analyzed the impact the Dutch diet had on the environment, concluding that reduced meat consumption would benefit the health of both the people and the planet. The government also changed its fish consumption recommendation — from two portions to one portion a week — in order to improve sustainability, National Geographic reported. “One portion is enough to reach the benefits for coronary heart diseases,” Corné van Dooren, a sustainability expert at the Netherlands Nutrition Center, told National Geographic. U.S. guidelines have been criticized for not taking the environment into account when making dietary recommendations.

Nutritionally, the Netherlands’ circle is mostly made up of fruit and vegetables, bread, grains and potatoes and unsweetened beverages like water, coffee and tea. Cooking fats and oils take up a very slim section of the circle. The nutritional guidelines also recommend reducing dairy, alcohol and salt consumption.

Those in the world’s healthiest country abide by the Mediterranean diet, an eating regimen that prioritizes whole grains, plant-based foods and healthy fats like olive oil. Health experts praise the diet for reducing risks for some cancers, Alzheimer’s and heart disease. While Italian food culture is centered around Mediterranean foods, the country doesn’t have an official food guide, according to the Food and Agriculture Organization of the United Nations. The Institute of Food Science of the University of Rome has designed a pyramid that emphasizes drinking water, eating produce and keeping active, but also makes room for limited servings of bread, biscotti and, of course, pasta.

Icelandic people are some of the healthiest in the world, with an impressive life expectancy. Iceland continuously lands at the top of the Healthiest Country Index — a fact that can, in part, be attributed to the nation’s eating plan. Its residents mostly stick to fresh, heart-healthy fish for protein and rely on their thriving dairy industry for a creamy yogurt called skyr, which makes for a nutritious breakfast. It’s worth noting that Iceland does not source many processed foods, nor does it host many fast food restaurants.

As for its official guidelines, Iceland promotes a food circle that is divided into six sections: fruits, vegetables, cereal and grains, dairy, animal-based protein and nuts and oils and visible fats, according to the FAO. Water is at the center of the circle, and activity is promoted all around it. Experts from Iceland’s Directorate of Health encourage eating five portions of produce a day — which does not include fruit juice and suggests meat in moderation and little added sugar and salt. It also recommends focusing on Vitamin D, especially in the winter, through supplements or cod liver oil, since the country gets a scarce amount of sunshine in the colder months.

In Switzerland, another nation that consistently ranks high on Bloomberg’s Global Health Index, the Swiss Society for Nutrition emphasizes sugarless beverages, produce, grain and potatoes. It suggests moderate servings of meat and fish and tofu, as well as liquid fats and nuts. Sweetened and boozy beverages and nutritionally void snacks sit at the apex of the Swiss food pyramid, suggesting they should be consumed sparingly. MyPlate doesn’t acknowledge that these categories exist, which is unrealistic. In the U.S., potato chips make up $22 billion of the snack market — out of sight isn’t out of mind, in this case.

Japan’s food guide is playful. It’s modeled after a spinning top, a traditional Japanese toy, and reads like an inverted pyramid. Unlike many of the Western food guidelines, this one is high in carbohydrates and low in fat: It first emphasizes grain-based dishes like rice and noodles, followed by veggies, fish, eggs and meat. Fruit and milk sit at the slimmest part of this diagram, as the two have the fewest recommended servings per day.

Research has found a superior life expectancy for those in Japan, particularly compared to U.S. residents. In the book Secrets of the World’s Healthiest Children: Why Japanese Children Have the Longest, Healthiest Lives — and How Yours Can Too, the authors suggest mimicking certain aspects of Japanese food culture, like choosing foods with fewer calories, eating rice and resisting the urge to demonize certain foods, according to Today. One message promoted by the Japan Ministry of Agriculture, Forestry and Fisheries, which developed these guidelines, is to enjoy your meals, according to the FAO. This sentiment is similar to that of “mindful eating,” a practice that has gained attention in the States, as Americans look for a solution to eat slower and decrease their overall intake.