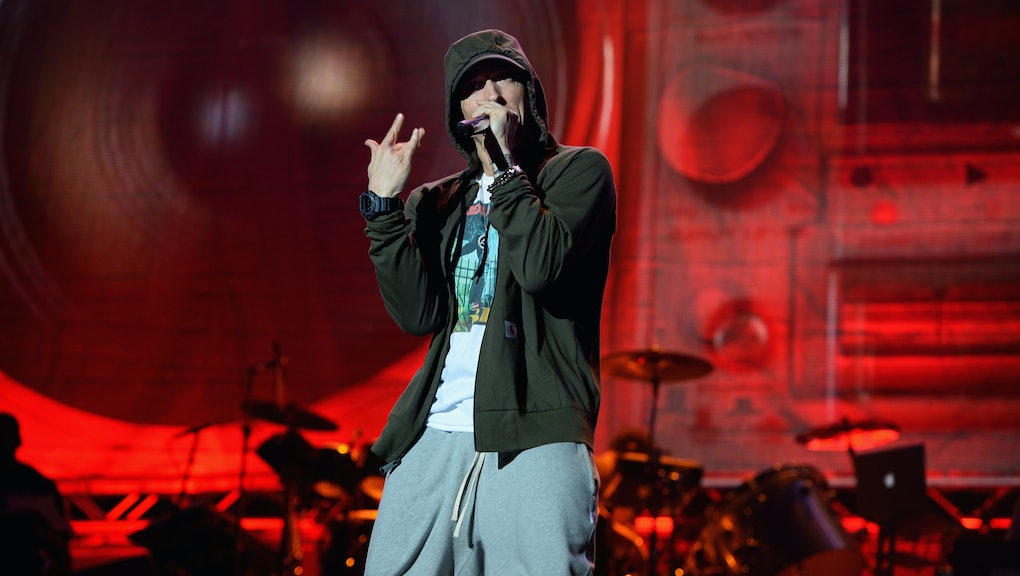 Despite taking place at Tuesday’s BET Awards, it’s as clear that Eminem’s blistering bar-by-bar takedown of President Donald Trump was for white audiences as it is that the Detroit-bred rapper wouldn’t have a platform to spit it from were he not white.

None of which is to disparage Em’s talent, which is real. It’s a sentiment I imagine he’d agree with:

“Look at these eyes, baby blue, baby just like yourself/ If they were brown, Shady’d lose, Shady sits on the shelf,” Eminem rapped on “White America” in 2002. “Look at my sales/ Let’s do the math: If I was black, I woulda sold half.”

For the bulk of his 20-year career, Eminem has benefitted greatly from his whiteness. He’s sold millions of records to a fan base of angsty white suburban teenagers while parlaying the respect of his black peers into one of hip-hop’s more singular and lucrative success stories. (He came up in Detroit’s black battle rap scene; Dr. Dre signed him to his first major record deal; Kendrick Lamar listed him among the greatest rappers of all-time on his “Control” guest verse.)

Eminem was the white boy too skilled to dismiss as only famous because he was white. But his whiteness was also what gave him a leg up on black artists who’d already done what he did — and often better — while earning him the pearl-clutching horror of white parents fearful that black rage had come home to roost in the form of a profane blue-eyed youngster who looked a lot like their sons.

The tension propelled Em’s star ever higher — even as white culture warriors continued to cast the rap music he grew rich off of as an emblem of black America’s alleged pathologies.

In this light, Tuesday’s freestyle was a call to arms for Eminem’s white listeners, and an act of performative allyship for his black ones. I’m with you, he told ex-San Francisco 49ers quarterback Colin Kaepernick, his fist raised, standing in a parking lot with a dozen of his black friends hanging back in the shadows, nodding their approval. And to his white fans:

“Any fan of mine who’s a supporter of his [Trump’s]/ I’m drawing in the sand a line, you’re either for or against/ And if you can’t decide who you like more and you’re split/ On who you should stand beside, I’ll do it for you with this: Fuck you.”

The reality is that black people don’t need Eminem or this message. Black voters showed up to block Trump’s election in numbers that put white voters to shame. Black rap fans heard YG and Nipsey Hussle’s “FDT” back in March 2016. Black people were agitating against the racism that Trump so successfully weaponized long before Eminem dropped Tuesday’s freestyle — including in 1993, when Em was rapping about how black girls only dated him because they wanted his money and how superior white girls were in general.

But if there’s one thing the past two years have made clear, it’s that white Americans need a wakeup. The “whitelash” that marked Trump’s rise laid bare the extent to which white racism never lost its footing as an organizing principle of American life. More than half of white voters — 62% of white men and 52% of white women — opted to send a petulant bigot to the White House, a man who openly disputed the legitimacy of their first black president and praises the “very fine people” who march in white supremacist rallies.

If it takes another white man who has benefitted similarly from his whiteness to denounce Trump, in a format that white Americans will actually hear and take to heart, so be it. Far too many of them haven’t listened to anyone else. And the Trump problem isn’t going to solve itself.