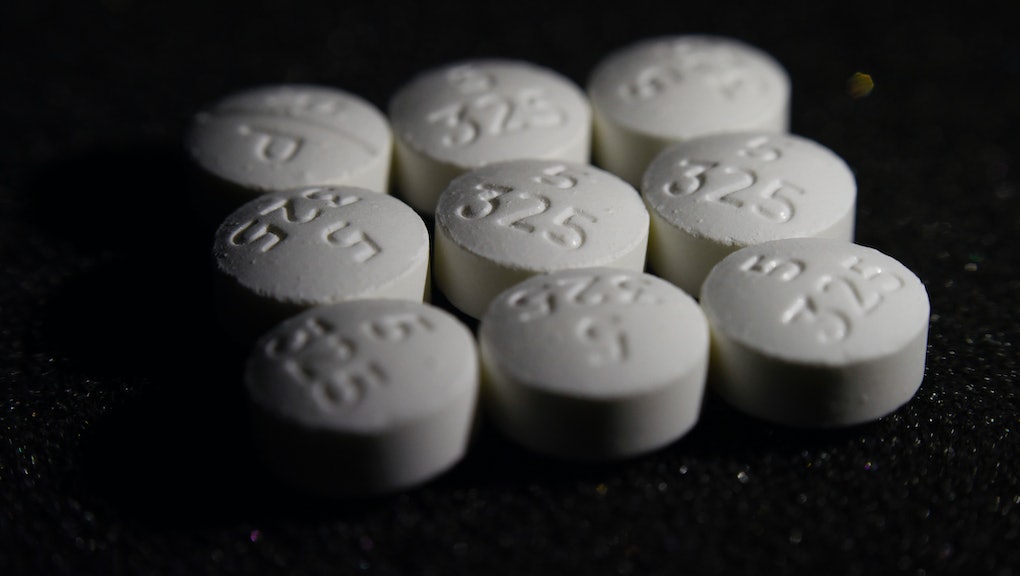 Trump said in August the opioid crisis is “a national emergency.” He still hasn’t declared it one.

Every day, we bring you a different dispatch on Trump’s America. Today’s focus: Opioids.

More than two months after declaring the nation’s opioid crisis a “national emergency,” President Donald Trump still has yet to officially designate the epidemic as one — holding up funding that could help people who use opioids and first responders.

In August, at the urging of the opioid commission the president assembled shortly after taking office, Trump stood outside his New Jersey golf course and said he would make the nation’s growing opioid crisis “a national emergency,” which allows the government to more rapidly release funds to address a crisis.

That designation would free up federal dollars to pay for drug addiction treatment, help hospitals treat more people and send further resources to first responders dealing with the epidemic that killed tens of thousands in 2016.

When contacted by Mic, the White House issued the same statement it did when asked about the status of the emergency declaration at the end of August.

“The president’s policy advisors are working through the details with all of the relevant components and agencies,” the spokesperson said. “Right now these actions are undergoing a legal review.”

The only difference: In August, the White House told NBC News the review was being “expedited.”

According to the most recent government data, nearly 65,000 people died of drug overdoses between February 2016 and February 2017, which amounts to a 20% increase over the previous 12-month period.

Many states have seen far greater increases in drug overdose deaths. Florida and Pennsylvania, which were keys to Trump’s electoral victory in November, saw increases of 53% and 40%, respectively. The highest was the District of Columbia, which saw a 128% increase.

The spike in fatal overdoses seems to be driven in part by synthetic opioids such as fentanyl. Deaths caused by those synthetics, which are up to fifty times more potent than heroin, doubled in the 12-month period ending in February, to more than 21,000.

Officials at the White House and Department of Health and Human Services said Wednesday that the administration has aggressively confronted the opioid crisis. Funding has targeted the import and distribution of fentanyl, which is often mixed in with heroin and cocaine in the drug supply, and provided first responders with Naloxone, which revives people who have overdosed.

Local governments have also received money to track clusters of overdoses as they happen, to rapidly pull lethal doses off the streets.

Chris Jones, a senior policy official at HHS who focuses on opioids, said his agency has put more than $800 million into fighting the opioid epidemic this year. That includes $144 million in September.

“We’ve put out all the money Congress gave out,” Jones said. “We’ll follow the orders that we receive from the White House.”

Because the most recent national data on overdose deaths is from February, the effectiveness of these grants will be difficult to judge for several months. HHS only made its first major opioid grants to all 50 states — totalling $485 million, passed at the end of President Barack Obama’s administration — in April.

“The president and the whole administration believe we are in the midst of an unprecedented prescription and opioid emergency,” the spokesperson said when asked why Trump said, in August, “I’m saying officially, right now, it is an emergency.”

On Nov. 1, the president’s commission, led by New Jersey Gov. Chris Christie, will issue their final report. The governor had no further comment on the emergency, his spokesman told Mic.

Today’s question: How serious are opioid addiction and overdose problems in your community?

Please email trumpsamerica@mic.com with your thoughts. And subscribe to the newsletter here to join the conversation.

Over the summer, NBC News reports, Trump said he wanted a tenfold increase in the size of the U.S. nuclear arsenal.

Amid rumors that chief of staff John Kelly has a rift with the president, Trump tweeted that any stories saying Kelly may be fired are lies. A possible successor to Kelly, Tom Barrack, told the Washington Post he’s not pleased with certain aspects of Trump’s performance thus far.

Axios reported the Trump administration is set to release trade proposals that will anger Congress, Canada and Mexico — giving the president the pretext to withdraw from the North American Free Trade Agreement, which he railed against during the campaign.

HHS may move to define life as “beginning at conception,” a policy long pursued by anti-abortion rights groups, because it makes abortion easier to define as murder.

The Supreme Court dismissed a challenge to Trump’s travel ban.

Carter Page will not testify in front of the Senate Intelligence Committee. Page was a foreign policy adviser to Trump’s campaign.

Following the recent public pressure from Trump, NFL commissioner Roger Goodell on Tuesday said “everyone should stand” for the national anthem. The league will also meet to discuss the issues raised by players who have knelt during the anthem.

Seen this? Eminem freestyles about Trump. It’s not pretty for the president.

Dove has faced a backlash after launching a lotion campaign that shows a black woman transforming into a white woman. This professor of cultural studies explains to Mic that soap ads have a long history of racism. Tap or click the video below to watch.