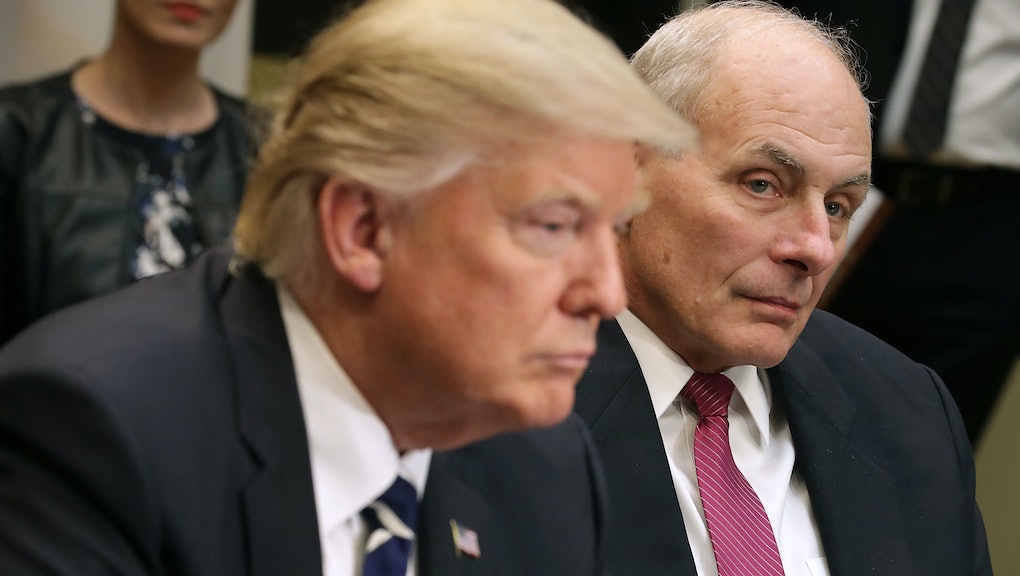 He was supposed to bring stability to an administration mired in chaos.

But 2 1/2 long months after Donald Trump promoted John Kelly to chief of staff, it’s difficult to see what — if anything — has changed.

Sure, Kelly has overseen the removal of some of the administration’s most toxic staffers, like Steve Bannon, Sebastian Gorka and, gulp, Anthony Scaramucci.

But he’s also looked on helplessly as the president defended white supremacists after the violence in Charlottesville, Virginia, repeatedly played reckless games of nuclear chicken with North Korea, and continued to use Twitter to attack everyone from “son of a bitch” NFL players and the “fake” news media to outgoing Sen. Bob Corker (R-Tenn.), who over the weekend lamented the fact that the White House had become an “adult day care” center.

And things only appear to be getting worse.

Trump is “unraveling,” Vanity Fair reported Wednesday. According to the report, the president has grown increasingly isolated within his administration, his mood has darkened and advisers have gone into full containment mode.

But can they really keep the embattled president in check? Can Trump’s staff exercise any control over his reportedly erratic behavior? And can Kelly — a retired general — really bring order to Trump’s White House?

According to people familiar with Trump and the inner workings of presidential administrations, the answer is probably not.

Bill Curry will never forget the night he met Donald Trump in the early 1990s.

Curry, a former counselor to President Bill Clinton, was running for governor of Connecticut and Trump, then an eccentric businessman, was apparently interested in building a casino in Bridgeport, the state’s largest city. He invited Curry and his team over to Trump Tower.

Normally in such meetings, the candidate does most of the talking — but that wasn’t the case with Trump.

For the duration of the rendezvous, Curry said in a phone interview with Mic, Trump spoke only of himself — the things he owned, the places he’d been — and without segue between the stories.

“He had given himself a nickname, ‘the Trumpster,’” Curry said. “He only referred to himself in third person. This was for an hour.”

The bizarre meeting, which Curry later recounted in a Salon essay, left an impression on him.

“I thought, ‘This is a man who is barely held together,’” Curry added.

Kelly and the other so-called “adults in the room,” according to Curry, are no match for the level of “crazy” Trump has brought to the White House.

“This is the biggest fucking mess we’ve ever seen,” Curry said. “This is just like everything else he ever ran.”

Curry, who worked in the Clinton White House from 1995 to 1997, knows how White Houses are supposed to operate. As an adviser to Clinton, he knows the White House has two jobs: to help make policy and to help craft messaging around that policy.

This White House, Curry said, isn’t doing that because it’s spending all its bandwidth on managing Trump.

How do you contain Trump, though, when he’s always operated in a state of chaos?

Michael D’Antonio — a Pulitzer Prize-winning journalist who wrote the 2015 biography of Trump, Never Enough: Donald Trump and the Pursuit of Success, said in an interview Thursday that Trump has always relied on “caretakers” to help contain and reassure him.

But back then, Trump was running the Trump Organization — which, despite the image he created for himself as a big-shot businessman, was actually not very big and certainly not particularly complex. D’Antonio recalled going to Trump Tower to meet with the future president for his biography and being “shocked by how small the staff was and how quiet the environment was.”

“There was very little for him to actually manage,” D’Antonio said. “His whole life was about creating this image of this business person without actually being an operator of complex businesses.”

Now, though, Trump is facing real stakes for the first time. And according to D’Antonio, he appears to be frustrated with the high-profile failures he’s encountered during his presidency so far. Chief among them, according to Vanity Fair, is his recent proxy loss in the Republican primary for Alabama’s special Senate election.

“The biggest fear in his life was to be perceived as a loser, and so far he’s a loser president,” D’Antonio said. “I think that this is intolerable for him.”

And things appear to be getting worse, the bombshell Vanity Fair report suggested. The White House appears to be in such a state of discord, according to the magazine, that Steve Bannon — Trump’s former chief strategist — is said to have given the president a mere 30% chance of finishing his first term.

“We’re watching somebody self-destruct and it’s really sad,” D’Antonio said. “He’s diminished the presidency in a way that no one else could.”

That has all amounted to a Sisyphean task for Kelly, who in a press conference Thursday pushed back against Corker’s characterization of the White House — an assessment that’s reportedly shared privately among number of Republicans.

“I was not brought in to control him,” Kelly said Thursday, denying he was on the cusp of quitting or being fired.

But Kelly did acknowledge the difficulty he has faced in the just-under three months he’s been chief of staff, telling reporters it is “the hardest job I’ve ever had.”