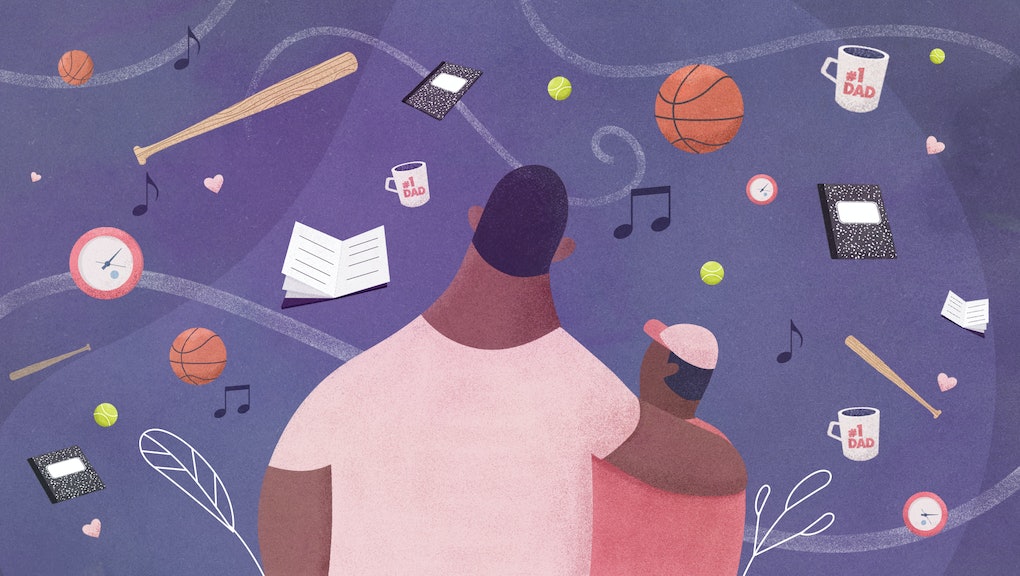 After Mason Parker finishes up his typical 10-hour shift as an assistant manager at a mattress store in Charlotte, North Carolina, he jumps in his car to make the half-hour trek back home — but not to rest. Instead, he might shower, change clothes and make the 80-mile drive to Winston-Salem for a daddy-daughter breakfast at his child’s school. After the breakfast and business meetings for his budding entertainment career, he rushes back to Charlotte to pick up his son for the weekend.

Parker, despite caricatures to the contrary, is not an anomaly. For many black fathers, his story is all too common. While the media and conservatives constantly repeat tropes from the Reagan era that were born out of the Moynihan Report, some of the men I spoke to said this generation of black single fathers are determined to outperform their fathers as parents and forge closer bonds with their children. Black men are often stereotyped in the media as deadbeats who are rarely involved in their children’s rearing. But, a study by the U.S. Centers for Disease Control and Prevention disproved the commonly held myth of absentee black dads. According to the CDC’s findings, black men are often more involved in the daily tasks of parenting than dads from other racial groups.

Their stories need to be a larger part of the narrative of black men and single fatherhood. In interviews with several black fathers, they all acknowledged the mistakes they’ve made in their journey as partners and parents. They admit to struggling with poor planning, immaturity and bad decision making. None of them is looking to be celebrated as a hero, but they were eager share stories about how fatherhood made them better men.

Dominic Rivera, a 39-year-old Afro-Puerto Rican former Air Force officer, is the primary caregiver to Dominic Jr., his 14-year-old son. Rivera’s ex-wife has experienced mental health issues and drug addiction, and is in and out of their child’s life. Rivera admits to having been frustrated early by his ex-wife’s lack of support, but clearly says, “I no longer have any animosity,” and has never prevented his son from seeing his mother. Dominic describes his relationship with his son as “strong,” though in the beginning raising a child alone was “overwhelming.”

“It’s the realest form of responsibility that can be bestowed on you,” he said. Dominic now laughs about his son’s independence and says that living with his son is like “two roommates who go to work every day.” Now that Dominic Jr. can be left alone, Dominic has pursued a new found passion for stand-up comedy and performs at open mics around the Washington, D.C., area.

Eugene Samuel is a Georgia-based 35-year-old father of four. He has three children from his ex-wife, including a 17-year-old stepson that he formally adopted. After his marriage dissolved, Samuel got involved with another woman with whom he had another child. She died by suicide, leaving Samuel with full custody of his youngest son, 8-year-old Jacob.

A typical day for Samuel and Jacob begins at 6:15 a.m. He drops Jacob off at before-school care at 7 a.m., then begins his hour-long commute to work. Jacob gets out of school at 2:30 p.m. and heads to an after-school program, where Samuel picks him up at 5:30 p.m. They come home and Samuel prepares dinner. After eating, Samuel helps Jacob with his homework, then it’s off to bed to prepare for another early morning.

Samuel had lived in Boston, but relocated back to his native Georgia to be closer to his older children. He credits the move with improving the relationship he has with his older children, though he still has difficulty mending the bond with his eldest son, Noah. Samuel said he feels that the fact that he is not his biological father plays a major role in their occasional discord, but is confident they can work through things.

Arrie Woodard could relate to Samuel’s experience as the primary provider for a son. The 39-year-old Navy veteran and father of two co-parents with the mother of his second son, but says he is “there before anybody else” with regard to anything having to do with his son, “little Arrie.” They have forged an inseparable bond. He has been involved at every turn, from coaching his sports teams, helping with homework and going to amusement park getaways.

Woodard, who lives in Springfield, Virginia, is also trying to re-establish a relationship with his first son, Macai, who is only a few months older than Arrie. He said that he is thankful that, while their relationship was strained, Macai’s mother’s husband, Jermaine, was there to be a male figure in his life.

A problem only arose with Woodard’s second son’s mother when she was in a violent, abusive relationship.

“My thing was, they were unteaching the lesson I was trying to teach my son,” Woodard said. “I’m telling him not to hit women and to respect them, then he goes to his mom’s house and sees it.” Woodard’s second son’s mother recently had another child by her ex-boyfriend. Arrie is serving as a father figure for that child, too, though he and the mother have been divorced for eight years.

Like any parent, these dads want better for their children than they had. They all said they want their sons and daughters to make responsible decisions and refrain from having children until they have significant life experience and are prepared for the difficulty of maintaining a lifelong relationship.

However, if their sons were poised to become young fathers, they would not pressure them to get married. Many traditionalists and political conservatives believe that marriage would be the saving grace for black families and think unwed couples automatically entail an absent, undedicated and uncaring father. These men are among several single fathers who disprove that idea and show that good parenting doesn’t have to mimic long-held assumptions about the nuclear family.

According to Samuel, the keys to successful and healthy parenting are “patience and communication” — whether inside or outside of marriage.

“Fatherhood for a man should be your most important and hardest job,” Samuel said. “You are leading and molding young humans and it is 10 times as hard for black men raising black kids.”