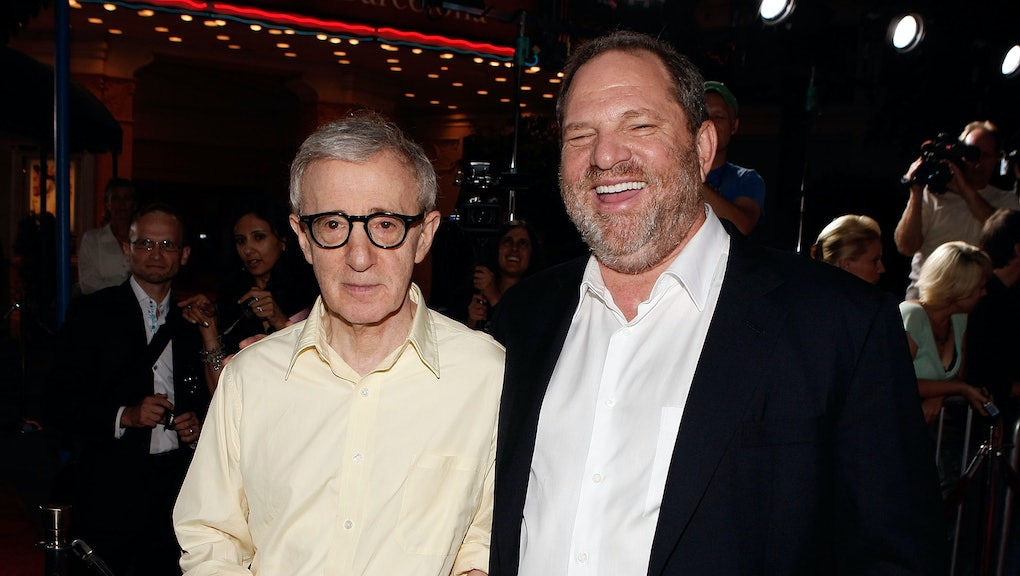 As women in Hollywood continue to come forward with stories of being sexually abused by producer Harvey Weinstein, another powerful man with charges of abuse against him is speaking out about the allegations: Woody Allen.

In an interview with the BBC, Allen said he hadn’t been aware of any charges of sexual assault or rape against Weinstein during the two’s collaboration on such films as Bullets Over Broadway and Mighty Aphrodite. Some of those allegations were first publicly revealed by journalist Ronan Farrow, Allen’s son, in the New Yorker.

“No one ever came to me or told me horror stories with any real seriousness,” Allen said.

“And they wouldn’t, because you are not interested in it. You are interested in making your movie. But you do hear a million fanciful rumors all the time. And some turn out to be true and some — many — are just stories about this actress or that actor.”

Allen called the allegations “very sad for everyone involved” — including Weinstein.

“The whole Harvey Weinstein thing is very sad for everybody involved,” Allen told the BBC. “Tragic for the poor women that were involved, sad for Harvey that is life is so messed up.

“There’s no winners in that, it’s just very, very sad and tragic for those poor women that had to go through that.”

Though Allen said he hoped “some amelioration” would come of the allegations coming to light, he also warned of a possible “witch hunt atmosphere” against powerful men.

“You also don’t want it to lead to a witch hunt atmosphere, a Salem atmosphere, where every guy in an office who winks at a woman is suddenly having to call a lawyer to defend himself,” Allen said. “That’s not right either. But sure, you hope that something like this could be transformed into a benefit for people rather than just a sad or tragic situation.”

Allen has faced his own sexual abuse allegations in the past, after he was accused of molesting his adopted daughter, Dylan Farrow. Allen and Farrow’s mother, actress Mia Farrow, separated as Allen began a relationship with Farrow’s adopted daughter Soon Yi.

Allen’s continued success in Hollywood despite the allegations can be at least partially attributed to Weinstein, the Huffington Post reported. Weinstein’s company Miramax offered Allen a deal for Bullets Over Broadway in 1994 as the abuse scandal had begun to take a hit on Allen’s career.

“Shunned by Hollywood means nothing to Miramax,” Weinstein told the Los Angeles Times in 1994 about Allen. “We’re talking about a comic genius.”