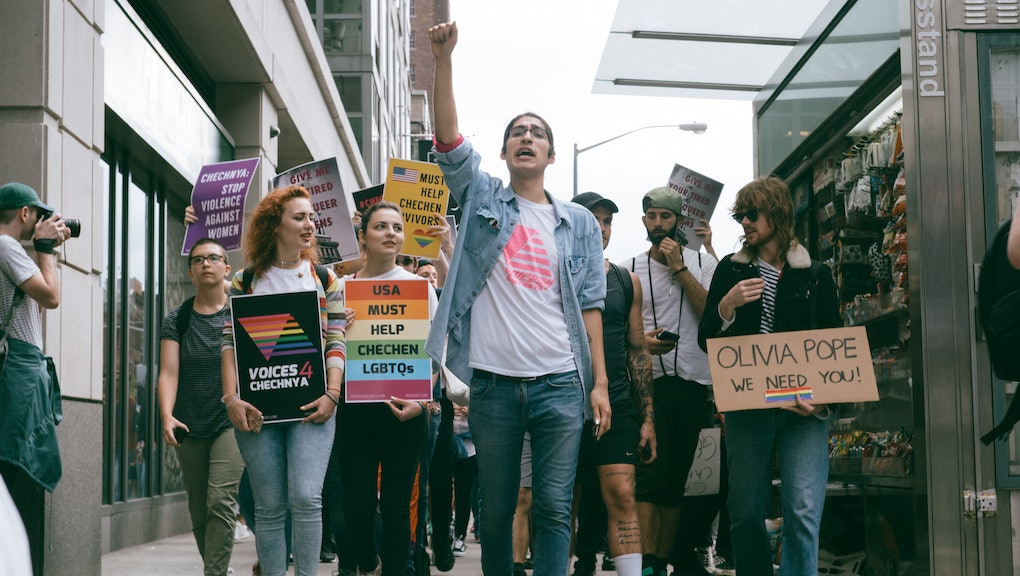 The new guard of LGBTQ activism is here, it’s queer and it’s Insta-worthy

“I’m sorry,” Adam Eli Werner says, interrupting his own thought flow over the phone speaker. “I’m organizing as we speak and have about 20 gay boys, all of whom have like a million followers, coming to my apartment right now and we’re all going to go to a rally together.”

Minutes later, I hear the buzzer go off, the lock on his door release and the sound of young gay men convening. ”Does anyone have an extra charger?”

This is hardly an atypical assemblage at the Greenwich Village apartment of Werner, the 27-year-old social media content creator by day, activist by night. In that instance, back in July, the small-in-size-but-behemoth-in-energy group was preparing to march 17 miles from the National Rifle Association’s ’s headquarters in Fairfax, Virginia, to the Department of Justice in Washington, D.C., to protest — in Werner’s words — the NRA’s “disregard for the lives of black and brown people in America.”

Marches like these — which Werner has been a part of, if not organizing himself, since finding his way into activism after June 2016’s mass shooting at the Pulse nightclub in Orlando, Florida — helped create the blueprint for Voices 4 Chechnya, a nonviolent, direct-action LGBTQ group working to resolve and assist members of the LGBTQ community being detained and persecuted in the European republic of Chechnya.

The story first came to worldwide attention in April, after the Guardian posted a story detailing prison beatings and electric shocks of gay Chechens. Though no men were identified by name, four spoke anonymously of the torture endured. Three months later in July, David Scott from HBO’s Real Sports sat down for an interview with Chechen President Ramzan Kadyrov, who declared the previous reporting to be nonsense. “We don’t have any gays,” Kadyrov said. “If there are any, take them to Canada.” A New Yorker article, released just weeks earlier, proved unequivocally otherwise.

It wasn’t until Oct. 16 that the first named survivor stepped forward. Many others are believed to remain silent because it is possible their family could find them and commit an honor killing should they come forward.

After first hearing of these reports, Werner recalls what he describes as “a subconscious awoke-ening moment.” Beyond the personal, the desire to fight back is in his lineage, Werner said.

“My great-grandparents fled Russia because of the pogroms, and they came to this country,” he said. “My mother was an advocate in the ’70s during the plight of the [human rights campaign] Soviet Jewry. And now here we are today, in the same struggle.”

After the what became obvious, the question quickly became the how.

“So I came up with the idea of marching from Stonewall to the Russian embassy, and then I spoke to some of our Russian friends [Voices 4 Chechnya partners with RUSA LGBT,] and they said, ‘No, don’t do that. The Russian embassy doesn’t care; that’s not going to be effective. We should march to Trump Tower [at United Nations Plaza].’ And I said, ‘OK, great.’ And so it was,” he said.

There’s an unmistakable glean to the content Voices 4 Chechnya shares. It’s at once “likable” by Instagram values: high-resolution, color saturated, well-outfitted, cheeky-yet-poignant signage, attractive people [this is a happenstance, not a mandate, according to Werner], while also carefully baking in the advocacy underneath. It’s as aware of how it is messaging as it is what it is messaging.

This call to action garnered the attention of many figures known for their fame and their followings, like RuPaul’s Drag Race’s Milk and 13 Reasons Why’s Tommy Dorfman.

“At one point, I didn’t think it was right for a drag queen to speak on politics or push their idea of activism on anybody, because as drag queens, we are in nightlife. It’s an escape from reality for most people, so I didn’t want to affect people’s desire to have a good time when they’re out and about, and they see me,” Dan Donigan (aka Milk) said in an interview.

“But then I realized, ‘Fuck, I have this huge platform and I do have time when I’m not touring to do something important with my day,’” he added. “Because if you’re only focused on yourself, you are not going to be a whole human being. I sit for three hours in front of a mirror painting my face every day, so I don’t need more of me. I want to help others.”

“This started as a small 15-20” person thing, and grew into something so much bigger than all of us,” model Marc Sebastian, one of the group’s founding members, said. “It wasn’t about us that day; it was about members of our family struggling and we were merely just there to help get the message out.”

Meanwhile, Vinnie Amendolare, former deputy director for presidential correspondence under former President Barack Obama, said he attended his first Voices 4 Chechnya meeting because he “had been looking for an inclusive, action-oriented community centered on LGBT issues for a long time. I came back because I found all of that and a family.”

“I kinda feel like fighting and being seen is just a right of passage at this point for our community,” digital content producer Keith Edwards said.

“The hardest part of reading about foreign LGBTQ issues is knowing there’s nothing you can do to help your queer brothers and sisters. Voices 4 changed that; it gave me a way to fight for my family,” filmmaker Michael Sutphin said.

“I’ve been holding so much anger with everything going on and it was a great release of that,” actor Matthew Risch, who plays Thomas on ABC’s How to Get Away With Murder, said.

“Besides meeting an incredibly inspiring group of passionate-ass people that I have grown to love, I now have a tangible way to focus my energy, resources and whatever skills I can bring to the table into something important and in a way that feels productive and holds the potential to create actual positive change,” David Sabshon, a producer and director for television and digital content, said.

This is not to say LGBTQ activists did not exist prior to them. From Marsha P. Johnson and Sylvia Rivera on the front lines of the Stonewall Riots in 1969 to the AIDS Coalition to Unleash Power, also known as ACT UP, in the 1980s to the founding of the Transgender Law Center in the early 2000s, activism is writhe within the DNA of the LGBTQ identity.

Yet unlike movements like Black Lives Matter or the Women’s March, the LGBTQ community has struggled to center its voice around a core mission.

BLM seeks “to build local power and to intervene in violence inflicted on black communities by the state and vigilantes.” The Women’s March intends “to harness the political power of diverse women and their communities to create transformative social change.”

But for a community bonded more in otherness than in commonalities, individual interests are often disparate. Many have only begun dissecting the not at all nuanced differences between gender and sexuality in the mainstream over the last few years.

Though marriage equality became the LGBTQ community’s victory on the global stage over the last decade, for many, that battle was at its core a distraction.

“I’m not concerned about whether I can get married, but whether I will die in the street at the hands of homophobes,” Legba Carrefour, who described himself as “radical queer,” told the BBC in 2013. That sentiment was not anomalous.

Though love won in 2015, factions within the LGBTQ population continue to be murdered at alarming rates, while safety and rights as citizens are rolled back and the ability to use bathrooms or serve in the military is seen as some sort of privilege.

Voices 4 Chechnya is not the antidote to these issues, nor does it seek to be. But it is, whether consciously or not, an antidote to the oppression burdened unto the LGBTQ community in Chechnya. More than anything, it is a viable action with which LGBTQ people can begin to swing the pendulum of progress back.

“What’s happening in Chechnya is not directly affecting any of these members’ lives, but we believe as an organization that because we are queer, we have an obligation to help other queer people who are suffering,” Werner said.

The group’s goal might be focused on a country over 6,000 miles from the U.S., but a community brought together by shared anger and disgust of the tyranny inflicted upon its brothers has brought about a catharsis of sorts.

“It’s through a group of people coming together, with a leader as passionate as Adam is, that when you go to a meeting you do feel invigorated; you do feel like you can make an impact,” Donigan said. “Maybe it won’t be the change that we’re all hoping for, but you’re going to make an impact that will make things better for some people.”

So, what happens now? They meet again, of course, to debrief on the march and discuss next steps. “Our research department” — yes, there’s an entire research department — “will present their findings and make recommendations for our next actions/protests,” Werner said. “After the success of our first fundraiser, we want to have an event by January at the latest.”

Also in the pipeline for the holidays is a fully operational online store. According to Werner, there’s been such a high demand for the Voices 4 Chechnya T-shirts that counterfeits of the Hey Rooney design are being sold online.

Whether it be his gathering of 30 people during the Memorial Rally at Stonewall in the wake of the Pulse shooting or his most recent march, Werner sees his role with crystalized clarity.

“People care and want to show up, genuinely; they just don’t always know how,” he said. “And I see it as my role as an activist to find ways or create ways that are easily accessible for people to do that, and then I promote it on social media.”