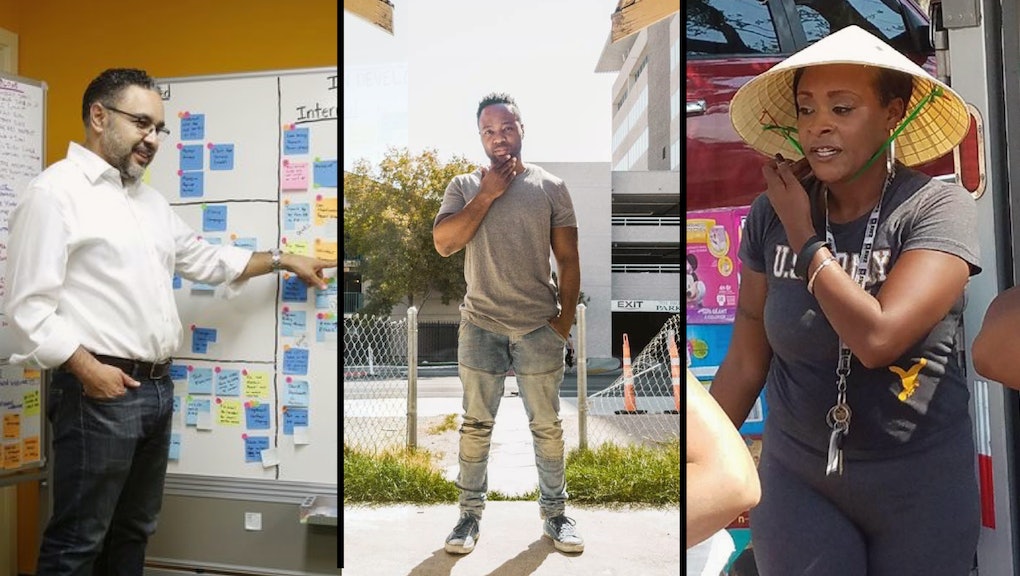 Money can be confusing, and the vast majority of us don’t have nearly enough of it — or at least not as much as we’d like. That’s why those folks who find a way to channel their economic knowledge or power into making the world a better place for others are so impressive.

Indeed, these financial heroes come in many types, from the leaders who help us all make sense of our budgets (without being too judgmental), to those elevating disenfranchised groups into better jobs and careers.

To that end, here are five money heroes — call them the Payoff protectors — making the financial world easier for vulnerable people. At the very least, they’re worth a follow on Twitter, whether you’re looking for a new place to put charitable dollars or just want to learn more about the fight for economic justice in 2017.

1. The immigrant helping undocumented workers get credit scores — and more

Even if you are an American citizen, it can be tricky to take the key steps you need to grow wealth — like by opening a bank account. Millions of Americans, mostly low-income, actually spend hundreds of extra dollars each year because of the high costs of being unbanked.

Suffice it to say, these financial hurdles get even higher if you don’t have a photo ID or Social Security number. To address this problem, José Quiñonez launched the Mission Asset Fund in 2007 to help undocumented immigrants gain access to the financial system.

“A lot of the things people think about immigrants and poor people generally are wrong,” Quiñonez told Mic in a 2016 interview after he won a MacArthur genius grant. “We’re not broken, we’re not delinquent, we’re not rapists. In fact, there’s a lot of hardworking, value-driven, faith-driven people that are out there in the margins.”

The Mission Asset Fund helps immigrants formalize what are known as lending circles, informal groups of people who pay a certain amount of money into a fund each month and then take turns claiming that lump sum. Thanks to Quiñonez’s MAF, that payment activity can now be reported to the credit bureaus, which in turn helps members gain access to better financial products.

Most recently, MAF has been providing fee assistance for DACA renewals.

2. The woman who clipped coupons for Hurricane Harvey victims

Not everyone has the means to give money away, even to causes that are important to them.

But you can still do a lot of good if you have some spare time and a few coupons — which is how Kimberly Gager did her part in the aftermath of Hurricane Harvey, as a recent Mic video segment explains. The extreme couponer shared on Facebook that while she didn’t have any diapers or formula to spare (particularly hard for young parents to come by in the wake of natural disasters) she did have lots of store coupons.

So Gager posted on Facebook about her extra coupons and suggested that aspiring contributors PayPal her so she could buy more supplies at an even bigger discount: Her garage was soon overflowing.

In October Gager posted photos on Facebook showing her with a band of volunteers handing out items from a truck.

3. The formerly incarcerated CEO making it cheaper for inmates to phone their families

In an age when Silicon Valley is criticized for being out-of-touch on topics of race and class, founders like Frederick Hutson are gaining headlines (and venture capital) for their focus on technologies aimed at helping disenfranchised groups — like the incarcerated population, for example.

“I saw firsthand that inmates who stayed in touch had a better chance of not going back to jail after they got out,” Huston told USA Today in a 2014 profile. “To the extent that a company [like Pigeon.ly] can mitigate the harsh and stressful world of prison and give people that sense of self through contact, that is very positive.”

4. The entrepreneur getting businesses to hire where it counts

Philanthropic organizations spend lots of money on costs like salaries, office space and supplies — enough so that do-gooders around the world have increasingly wondered if it would be easier to just give poor people cash directly and let them decide what to do with it.

Startup entrepreneur Leila Janah decided to take that thinking one step further by launching Samasource, a nonprofit data services company based in East Africa that hires only those people who are below the poverty line, usually for work that can be done remotely, like image labeling.

In urban Kenya, incomes for Janah’s employees grew about 184% over four years — far more than incomes grew for comparable residents who received cash grants, according a piece Janah wrote for Harvard Business Review.

Personal finance writing can patronize at times: After all, it’s safe to say your morning coffee is probably not the thing making you poor if you’re working full-time and still struggling to make ends meet.

University of Pennsylvania professor Lisa Servon felt low-income people were also being condescended to about the decisions they make, particularly the choice to frequent “alternative” financial institutions like check cashers and payday lenders. So she actually tracked down jobs at two such establishments and then turned her experience into a book, The Unbanking of America: How the New Middle Class Survives.

So why do the unbanked make use of these services? A handful of reasons, Servon has found, from the fact that their services are sometimes cheaper, to more intangible factors. As Servon has pointed out on Twitter, these places — like one Speedy Cash location — may even have resources like a children’s play area, helpful for over-extended parents who can’t afford child care.

As Servon wrote in the New Yorker: “It turns out banks are often costlier for the poor than check cashers and other alternative services ... Many of the customers we interviewed told us that a lack of transparency at banks contributed to the costs they incurred; they found it difficult to predict when and what they would be charged.”