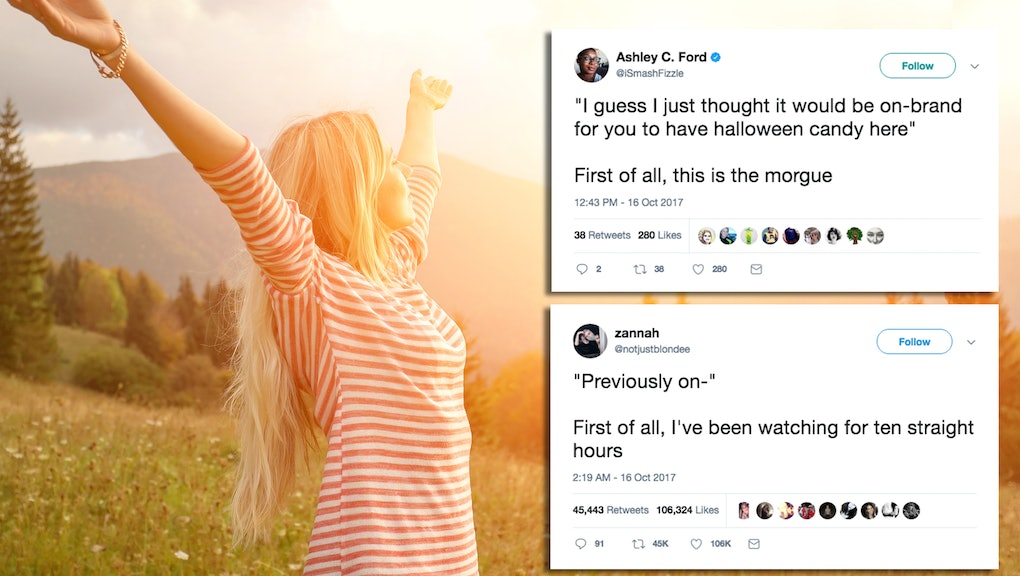 “First of all,” the newest Twitter meme, celebrates the art of the self-own

Sometimes, the best way to roast someone else is to bravely charge into the flames yourself — to face, embrace and defiantly remind everyone how messy you truly are.

That, my friends, is the sentiment at the heart of the newest Twitter meme — simply called “first of all” — in which participants proudly interject in an imaginary conversation, setting the record straight about what’s what. And, in the process, usually shoot themselves in the foot.

In its most advanced form, the “first of all” meme celebrates this elaborate art of the self-own, imagining a scenario in which you boldly plant your flag in the ground, proving yourself to be an even worse person than anyone could have initially anticipated.

That particular iteration of the meme is similar to the larger trend of suicide memes, a cathartic way for people of the internet to find solidarity through mordant self-deprecation. Like joking about suicide, boldly declaring our own horrific character flaws lets us reclaim some shred of power in a world where our leaders do things like make jokes about hanging gay people.

Like joking about suicide, boldly declaring one’s own horrific character flaws lets us reclaim some shred of power in a world where our leaders make jokes about hanging gay people.

But that’s not the way it started.

According to Know Your Meme, this “first of all” trend first popped up on Black Twitter, where user Megs imagined a needy would-be suitor asking why she’s been out of touch, to which she responds, “First of all experiment 623,” a reference to the Disney movie Lilo and Stitch in which its vast cast of alien experiments are named sequentially, “you’re not my man, relax.”

In the weeks since, this formula has been iterated endlessly, to varying degrees of success. For example, sometimes people just use the meme to be kinda rude in an entirely hypothetical argument. And, of course — the universal indication that a meme’s been beaten to an unrecognizable pulp — corporate-owned Twitter accounts have begun to catch wind of this trend.

All right, folks, wrap it up. Get your “first of all” tweets out there before this rapidly closing window slams shut for good. You’ll have plenty of opportunities to own yourself in the very near future, I assure you.