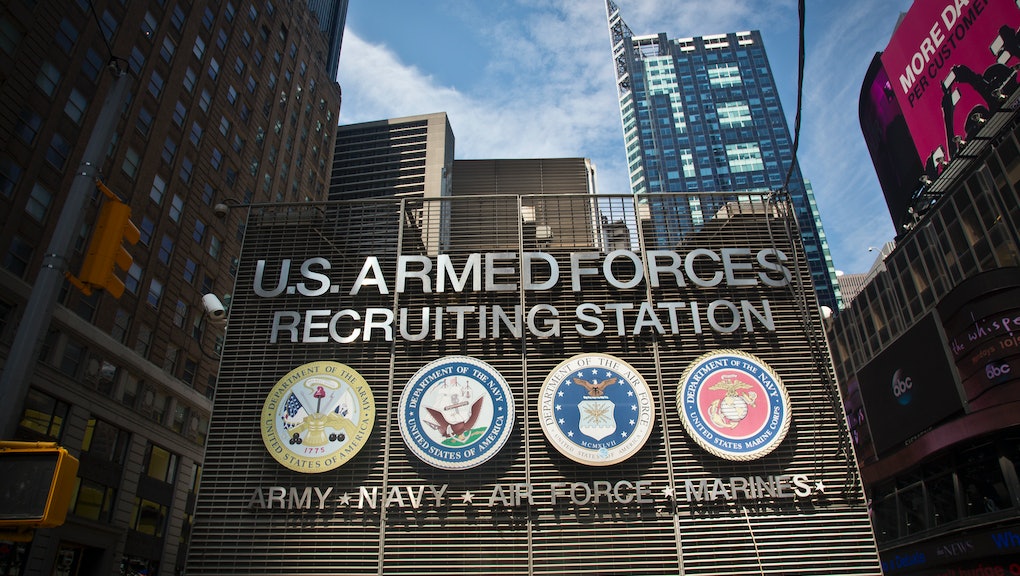 Oct. 18, 2017, 4:39 p.m.: On Wednesday, an Army public affairs officer responded to Mic’s Tuesday report, clarifying that “for the time being,” green card holders cannot enlist in the Army Reserve specifically, rather than barring enlistment in the Army overall. The public affairs officer said this change is necessary due to a new Department of Defense policy requiring green card holders to go through stricter vetting standards, requiring that background checks on green card holders be completed before they ship off to basic training. This story’s headline has been updated, and Mic’s updated article appears below.

Army recruiters have been told to stop enlisting green card holders into the Army Reserve effective immediately, according to an email sent to military recruiters and obtained by Mic, a move that experts say breaks federal law.

“EFFECTIVE IMMEDIATELY DO NOT ‘SHIP’ OR ‘ENLIST’ ANY FOREIGN NATIONAL’S (ALL I-551 CARD HOLDERS) UNTIL FURTHER NOTICE,” reads an email sent to Army recruiters on Monday by Gregory C. Williamson, chief of the Accessions Suitability Office Guard Strength Division. While the initial email did not specify, a subsequent statement from an Army public affairs officer clarified that the change applied only to green card holders seeking enlistment in the Army Reserve.

That directive is counter to a policy change the Department of Defense announced on Friday, which said green card holders could not ship out to basic training before a background check was complete.

“Effective immediately, all green card holders must complete a background investigation and receive a favorable military suitability determination prior to entering any component of the armed forces,” Stephanie Miller, the Defense Department’s chief of accessions, said in the Friday news release announcing the policy change.

However, the email from Williamson states green card holders looking to join the Army Reserve cannot even get to the background check process, as they are now barred from enlisting “until further notice.”

Kelli Bland, the director of public affairs at U.S. Army Recruiting Command, said on Wednesday that green card holders cannot enlist in the Army Reserve because there is not a Delayed Entry Pool where those enlistees can wait while background checks are run.

“Since this does not align with the new [Department of Defense] policy, U.S. Army Recruiting Command has put Army Reserve enlistments on hold for the time being,” Bland said in an email. “We are in the process of re-establishing a Reserve Delayed Entry Pool, so we can once again enlist I551 [green card] holders in the Army Reserve while also complying with the policy.”

Barring green card holders from enlisting in the military is against federal law, which states that an “alien who is lawfully admitted for permanent residence” may be enlisted in “any armed force.”

“Barring all immigrants from enlisting is harmful to national security and is unlawful, because federal law allows them to enlist,” Margaret Stock, a citizenship and immigration lawyer in Alaska who helped develop the Military Accessions Vital to National Interest program, said in an interview.

A Defense Department official said in April that the Trump administration had no plans to deny noncitizen recruits from serving.

“We still have no idea what this is about,” a military recruitment source, who was granted anonymity to speak freely, and to avoid retaliation, said Tuesday, referring to the email directive. “They told us to stop enlisting and shipping I-551 card holders immediately and no explanation was given.”

As of 2015, more than 109,000 military service members have become naturalized citizens since 2001, according to U.S. Citizenship and Immigration Services.

The policy change comes at a time when the Army is struggling to reach its recruitment targets, and the number of active-duty troops is at its lowest level since 2001, according to the Pew Research Center.