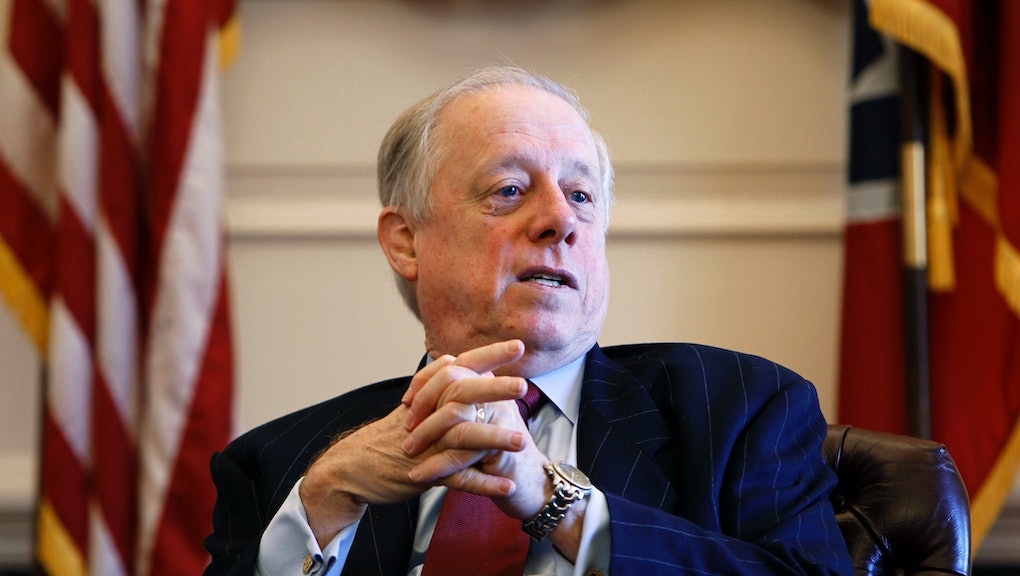 After longtime Republican Sen. Bob Corker announced he would not seek re-election in 2018, many Democrats began to imagine the impossible — a competitive Senate race in deep-red Tennessee.

But a surprise announcement suggests that Democrats may be on the verge of damaging their party’s national message in an attempt to chase the long-shot odds of winning the seat.

On Monday, former Democratic Tennessee Gov. Phil Bredesen released a statement claiming that “a number of people” had reached out to him about running for Corker’s open seat and that he was actively considering mounting a campaign.

But Bredesen may not be the “get” for Democrats that some pundits think he is. That’s because choosing Bredesen in 2018 would mean throwing Democratic Party support behind a candidate who is most famous in his state for drastic cuts to Medicaid, in an election year when protecting Medicaid is a top Democratic priority.

Prior to becoming governor, Bredesen made millions in the “managed care” industry — private plans administered by Medicare and Medicaid which some health care advocates oppose. As governor of Tennessee, Bredesen proceeded to propose a series of drastic cuts to the Medicaid rolls and scaled back Tennessee’s pioneering Medicaid program in an effort to balance the state’s budget.

Ironically, some of the fights in Tennessee over Bredesen’s health care policies resemble the current battle in Washington over Republicans’ multiple attempts to repeal the Affordable Care Act.

A 2005 report from the Washington Post recalls Tennessee activists staging a “die-in” protest after Bredesen announced first announced cuts to the state’s Medicaid program. “Die-ins,” where protesters lie down conspicuously, pretending to be dead, have been a common staple of protests against the many GOP health care proposals of 2017.

Tim Wheat, a Tennessee-based organizer with the group disability rights group ADAPT, who have has been on the front lines of the Medicaid fight in Washington, said Bredesen’s tenure was an early example of ADAPT’s protest strategy.

“I think it’s one of the best examples of ADAPT’s confrontational advocacy,” Wheat said. “We took over the governor’s office for 78 days — more than two months... We were demanding common community-based services for people with disabilities.”

Bredesen’s staff did not immediately return a message seeking comment.

Wheat noted that Bredesen did eventually come around on the home health care policies that ADAPT had pressured him on — albeit late in his tenure. While ADAPT doesn’t endorse political candidates, Wheat said he was encouraged by Bredesen’s change of heart.

But others are not so sanguine about the possibility of a Bredesen candidacy. Topher Spiro, a health care expert and senior fellow at the liberal think tank Center for American Progress tweeted that Bredesen “may not be the best candidate to prosecute the case against Trumpcare” given that he “threw 170,000 off Medicaid.”

Spiro also suggested that Democrats should search for a better candidate without a similar record.

Were Bredesen to run, he would likely have to answer for his own previous opposition the the Affordable Care Act’s Medicaid expansion.

In 2009, as Congress debated passing the ACA, Bredesen opposed the Medicaid expansion calling it “the mother of all unfunded mandates.” After leaving office he partially reversed his position and encouraged his Republican successor work out some sort of “third way” to expand coverage and accept the “free money” the federal government was offering.