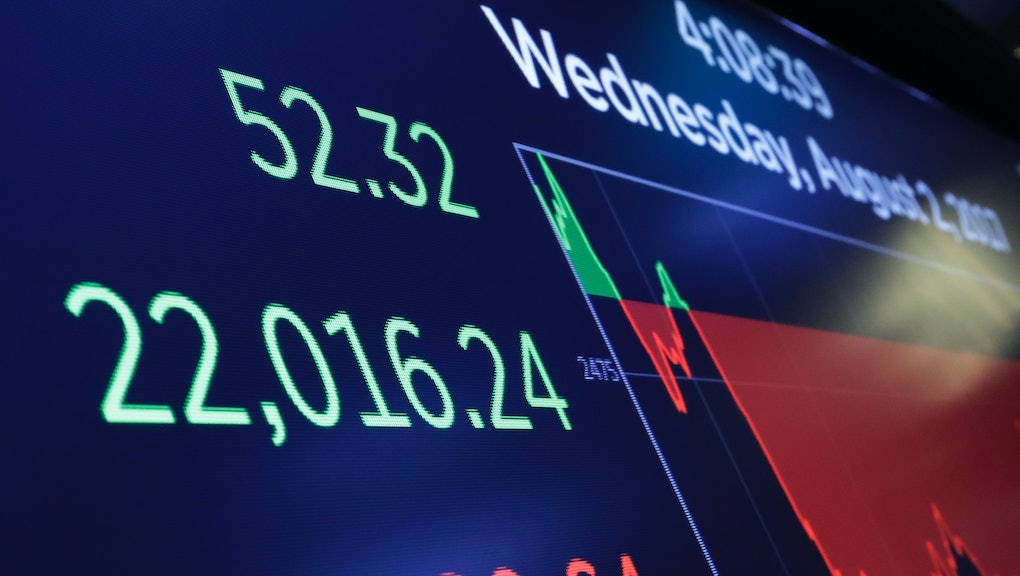 The Dow Jones Industrial Average, an index that tracks the stock prices of the 30 of the largest U.S. companies, closed at a record 23,157.60 on Wednesday for the first time in history, after briefly surpassing 23,000 points Tuesday before closing just a hair below that.

In and of itself, there’s nothing particularly important about the number 23,000 — other than its roundness — but it’s still considered a milestone for that reason. The Dow’s steady drumbeat of new records also makes clear the U.S. stock market’s gains are not be ignored. President Donald Trump even took to Twitter to share the news on Tuesday.

But a key possibility is that the Dow’s mounting pile of milestones could obscure trouble brewing: Critics worry the stock market’s prices are getting too high, and are overdue for a fall. The head of Vanguard, one of the largest investment firms in the world, recently told the BBC he expected a “decent-sized correction” in the near future.

A correction is what happens when stock prices fall after having been too inflated. One reason observers think that’s coming? As Marketwatch writer Tim Mullaney put it, investors may have placed bets that are too large on a recovery that is too tepid.

When stocks’ prices grow higher than what you might expect given companies’ profits or earnings, that can be a warning sign. One way to measure this is through the cyclically adjusted price to earnings ratio (CAPE), developed by the economist Robert Shiller.

Today the CAPE is above 31, a height it reached only few other times in history: Before the 1929 stock market crash and the 2000 internet bubble crash. Notably, before the 2007 housing market crash, it did not even reach that.

In other words, market prices could seriously be getting ahead of themselves, leading to a hard fall once investors come to their senses. That’s a problem, because people who are invested in the stock market through their retirement accounts are far less likely to be able to take advantage of fancy hedge funds, real estate, and other investments that people use to protect their wealth in the case of a market pullback.

Of course, if you’re simply putting away part of each paycheck into a retirement account and have many years til old age — then the daily swings of the stock market are not necessarily something you want to pay attention to. But with the stock market this high, it’s not a bad idea to rebalance: another way of saying that you should re-proportion the assets you have to get better diversification.

Another move you might make? If you have a little cash sitting around for fun, consider an experiment where you “buy the dip” when the stock market falls — using only that cash you don’t need for emergencies. That way, whatever shares you buy will likely be relatively cheap, which could mean decent gains after a few years.