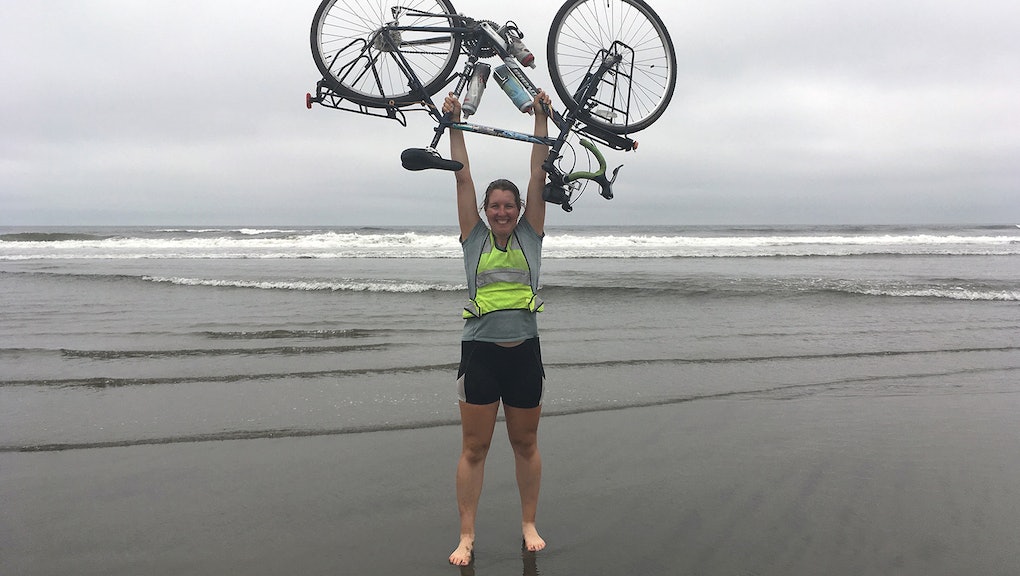 What I learned bicycling my way across America

I have a laundry list of reasons why I chose to ride my bicycle across the country for a second time. But the main motivator was definitely the sight of my mother, hooked up to a plethora of tubes at Memorial Sloan Kettering Cancer Center’s ICU, where she later died of leukemia complications. Two years after her death, still grieving and having been recently laid off, I decided to take advantage of my own health. My mom was someone who had sayings and one of them was, “the less you do, the less you want to do.” I settled on a plan to mostly follow Adventure Cycling’s iconic TransAmerica Bicycle Trail, and travel from Yorktown, Virginia to Seattle: a total of 4,274 miles over the course of three months. I cycled the first half with my friends Erik and Taylor and ended up sharing parts of my journey with a handful of cyclists I met on the road, forming a “trail family” with whom I leapfrogged across America.

Toward the end of the trip, I found myself sitting around a campfire at Olympic National Park, telling strangers about my travels and being faced with the blank stares I had long gotten used to. George, a physician taking his precious time off at the park, expressed an unprecedented awe of my feat. He had seen me on the road earlier that day and told me that the sight of a woman cycling on her own nearly lead him to pull over. He thought I was probably lost and something was seriously wrong.

Contrary to George’s concern, I was having the time of my life. I love using my own energy to go long distances. When I’m biking, there’s no need for gas — just food, and lots of it. There’s no engine either, just my own two legs — and what a liberating feeling it was to use them to go to faraway places.

He had seen me on the road earlier that day and told me that the sight of a woman cycling on her own nearly lead him to pull over. He thought I was probably lost and something was seriously wrong.

Somewhere in the heartlands, golden hour stretched my bicycle’s shadow across a seemingly never-ending wheat field. My eyes shifted from the road ahead of me down to the blurred motion of my legs pedaling away.

It was in that instant that I felt my mother’s presence the most, because I was doing precisely what made me happy. In that same moment, I felt as though I was embodying the famous Mary Elizabeth Frye poem. “Do not stand at my grave and weep;/ I am not there. I do not sleep./ I am a thousand winds that blow./ I am the diamond glints on snow./ I am the sunlight on ripened grain.”

I lived a simple life while biking across the country: I had only two shirts to choose from in the morning and I got used to going days without a shower. I mostly slept in churches and town parks but would sometimes find accommodation in the wildest places: a fire tower, a farm, a basketball court, a distillery, a park bathroom and underneath a sail that my hosts had hung in their backyard exclusively to shelter cyclists.

There’s nothing like the rhythm of a long distance bicycle trip; the sound of the tires hitting the pavement on days when tailwinds pushed me at 25 mph, the tranquility of the mornings I managed to hit the road before the world woke up, the music that blasted from my handlebar speaker in wide open Kansas farmlands where there wasn’t a soul around, the feeling of accomplishment after every mountain pass, state border and time zone crossing, and the speed in which I came to break down my tent and consolidate my belongings every morning so that they fit perfectly on my bicycle. Everything had a place and everything had a purpose.

Having been my own engine meant feeling all of Mother Nature’s elements more than I would in a car: the wind, the grades, the rain, the heat and the elevation.

As I was climbing Wyoming’s 9,584-foot Togwotee Pass, it seemed everything that could go wrong was, indeed, going wrong. After fixing my fourth flat, my slow grind allowed for an army of mosquitoes to swarm me constantly unless I surpassed 10 mph. Thunder rumbled in the distance and shortly after the alarm went off on the continuous glucose monitor I use for my Type 1 diabetes, indicating that my blood sugar was dropping at a dangerous rate. That forced me to stop and eat which attracted even more mosquitoes.

I eventually did get to the top, where the sweeping view of the Grand Tetons, a mountain range with steep, cartoon-like peaks reminiscent of the Alps, made it all worth it. As any cyclist or hiker can attest to, sweating your way up a hill makes you appreciate the peak and descent a million times more.

And then there were the people I met along the way: a pilot in Virginia who uses his spare time to rescue dogs around the country from being euthanized, a family in Kentucky who invited me into their backyard for a slice of pizza, a bike shop owner in Kansas who stayed open four hours after closing time to accommodate the day’s influx of cyclists, a bunch of teenagers on the side of the road in Colorado who tumbled for me as I rode by, a driver who pulled over as I was changing a flat to lend me a proper bicycle pump, and a man in Montana famous for opening up his mansion to as many cyclists as can fit inside.

This trek has reinforced to me that the bicycle is a great equalizer. It’s a vehicle most have access to, a machine powered by our own strength and a mode of transport that lacks walls. There’s something about being on such a journey that allows for complete strangers to tell you their life story.

In Idaho’s majestic Lolo National Forest, a 99-mile stretch of winding road offered breathtaking views, zero bars of cell phone service and plenty of time for reflection. Somewhere among the sprawling spruce trees, I saw an eastbound cyclist coming toward me and made a routine pull over to chat. We swapped tips on our respective roads ahead, bonded over our dread to go back home, and agreed that if we could, we would just keep pedaling. He summed up our frustrations perfectly. “I don’t want to go back to real life. This is real life.”

This trek has reinforced to me that the bicycle is a great equalizer.

On this cross-country tour, I found happiness in the instances where I was reminded that it was my own power that pushed me to wherever I was. I found happiness as I crested a hill in eastern Colorado and saw the snowcapped Rocky Mountains in the distance for the first time and in the steak dinner I ate the night after I completed my first century — 100 miles in one day. I found it sliding down a patch of snow in the middle of July and on a downhill in Idaho that never seemed to end. I found it every time I opened Google Maps and saw just how far that little blue dot had moved across the country. And I found it as I was crying, pressing my forehead against the airplane window on my way back home, marveling at the aerial view of the places we biked and how much more rewarding it was to see them at 10 mph.