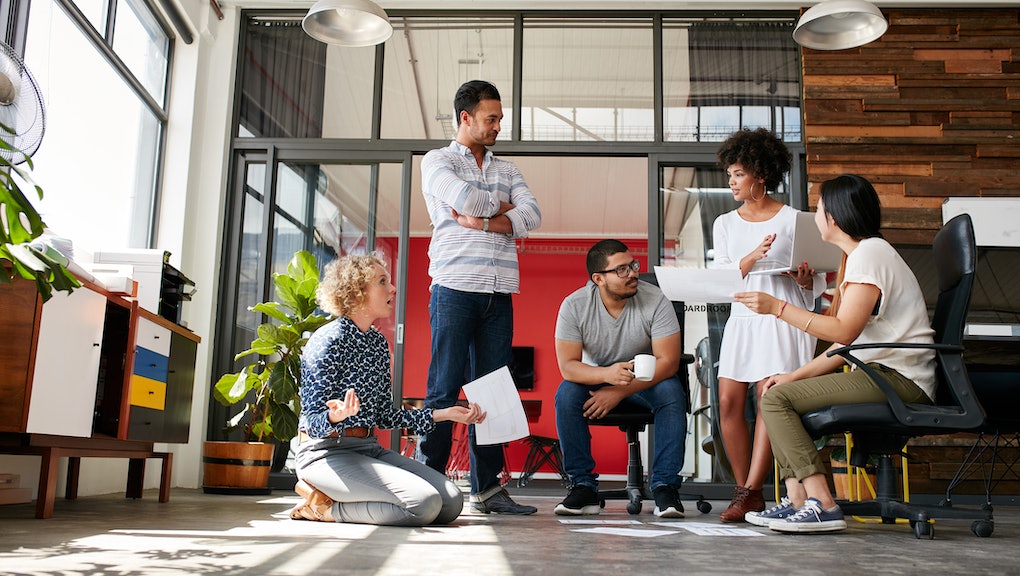 Yes, you know it’s important to be a “team player” at work. Who doesn’t like working with those who humbly share expertise, give valuable feedback and “go the extra mile” to make a group project succeed? But figuring out how to be one — without falling behind on your own work or turning into a work martyr — can be a challenge.

It’s doubly tough if you’re a natural-born introvert who tends to keep your nose down on the job, rather than chatting up your coworkers in the break room every chance you get. But here’s the thing: Your career success and future job opportunities have just as much to do with soft skills like teamwork, which make you more likable, as it does with how how smart you are and how well you solve problems.

Ironically, one of the best ways to work well with others is to spend less time with them. If you’re burnt out and over-stressed, you’re probably not super fun to work with. Plus, research has also shown that people who use all their days off are more likely to get raises down the line, in part because employees who are stressed out tend to perform worse on the job.

In short, if you’re looking for more creative ways to be a better team player, it pays to think outside the box. From having a hobby to getting the latest office gossip, studies on worker productivity and teamwork have identified a number of counterintuitive ways to make you everyone’s first choice for a work partner or team member on that next big project. Here’s what to know.

You probably picture the perfect team player as someone who’s always there when you need them, always has time to stay late at the office and who never gets distracted from the task at hand by outside obligations or hobbies. Company first, right?

Not necessarily. In fact, it’s the people who have lots going on after they clock out who are the best team players, according to a 2015 paper in Business and Society looking at 347 workers at 80 companies in Canada and China. The study found that people who posted higher engagement with the community were also more likely to be trusted by their colleagues.

“Hiring managers often dismiss volunteer work and community involvement as irrelevant, or even a potential distraction,” Ilan Vertinsky, one of the paper’s authors, told Fortune. “But really, people with busy evening and weekend schedules are exactly who should be getting hired.”

2. Stand up to the office bully

Workplace bullying is incredibly common, with about 1 in 3 employees reporting being bullied at some point, according to a 2015 survey from the staffing company OfficeTeam. Of those people, 13% said they ended up quitting their jobs, the survey found. Another 17% of them did nothing.

Bullies in the workplace can cause a vicious cycle, according to a 2015 study of 348 Spanish employees published in Anxiety, Stress and Coping: An International Journal. When someone gets bullied, the authors found, they’re likely to be bullied more in the future because they’re perceived as an easy target.

If you find yourself on the receiving end of this kind of behavior — or if you witness someone else being bullied — you should stand up to them. You don’t even have to get confrontational if it makes you uncomfortable: Simply documenting your interactions will create a paper trail that can help hold the bully accountable. If someone is harshly critical of yours or a colleague’s work, you might also try “turning the tables” by asking what they would have done differently.

Being a maverick has pros and cons. While some research supports the importance of having lots of opinions and perspectives, other evidence suggests that people who always play devil’s advocate may be bad for teams — interfering with projects by poking too many holes that sap their momentum. After all, nothing can get done if everyone is trying to be a leader with their own independent agenda.

So how do you walk the line between being proactive (and an independent thinker) and supportive of your colleagues? You might try taking a look at the way you’re expressing your ideas, not just the ideas themselves.

Some research suggests that in order for people to view you as effective, you need to provide about five times as much positive support for the ideas of others — ideally making your own helpful additions — as you provide negative or critical feedback.

That doesn’t mean you want to be positive when you know an idea is problematic — or over-promise on deadlines you can’t deliver. But it does suggest that your boss and coworkers are going to be much more appreciative of alternative plans, goals or benchmarks that make everyone look good — as opposed to yet another reason why something won’t work.

Whether it’s coming out of your office — or your headphones — the music your coworkers overhear could affect your work environment. The relationship between music and productivity is somewhat complicated, and probably depends a lot on the kind of work you’re doing. Happy music appears to improve people’s mood and help make them more cooperative in decision-making, according to a 2016 study of 266 adults in the Journal of Organizational Behavior.

One experiment compared the effect of playing “happy” music that people are more likely to know — examples included the Beatles and the theme song to the show Happy Days — with less universally loved genres, like heavy metal. Those who listened to the happy music were more likely to think cooperatively when given a fixed amount of cash to disseminate across private and communal uses than those who listened to the metal.

Music has also been shown to make workers more productive in professions ranging from factory work to surgeons, but there is a caveat there, too — these professions often require staving off boredom for long periods of time, whether you’re driving 2,000 miles or trying to stay alert over the course of a 13-hour surgery.

But as the Atlantic’s Olga Khazan pointed out, other studies focused on more cognitive or verbally challenging tasks found that people tend to perform optimally in silence: So if you aren’t letting happy tunes play through your earbuds, no sound at all is just fine (or some nice, quiet white noise).

5. Go ahead and gossip with your co-workers

Gossip has a bad rep, but multiple studies have have found that certain kinds of gossip actually confers numerous psychological benefits and can also help teams work better as a group. This obviously doesn’t mean that you want to be passing along half-baked rumors or wasting away your time at the water cooler — but it does suggest that gossip can have a surprisingly constructive role in the workplace.

Hearing positive gossip — why a colleague got a raise or a promotion, for example — sends employees clues about how they can improve their performance and land a raise of their own. Conversely, “pro-social” gossip also plays an important role in the workplace by helping to discourage dishonest, or otherwise exploitative, behavior.

So how can you optimize your relationship to the office rumor mill without getting a bad reputation yourself? Focus on positive news and lessons from that news. If you’re going to vent about something negative, vent to a good friend — and try to be in a calmer state when you do: While passing on negative gossip may make you feel good in the moment by purging some of your anger, this kind of gossip also appears to arouse negative feelings in the recipient by making them feel more self-protective. That’s not the kind of emotional contagion you want.

Finally, know that workplaces can channel gossip to better ends by focusing on the types of goals employees receive. Employees who have “mastery” goals — which emphasize mastery of certain material or competence, as opposed to beating others — are more likely to learn from positive gossip than employees who receive the kinds of performance goals that could make people feel unpleasantly competitive.

Want more workplace advice? Check out the ultimate Payoff guide to jumpstarting a career you love.