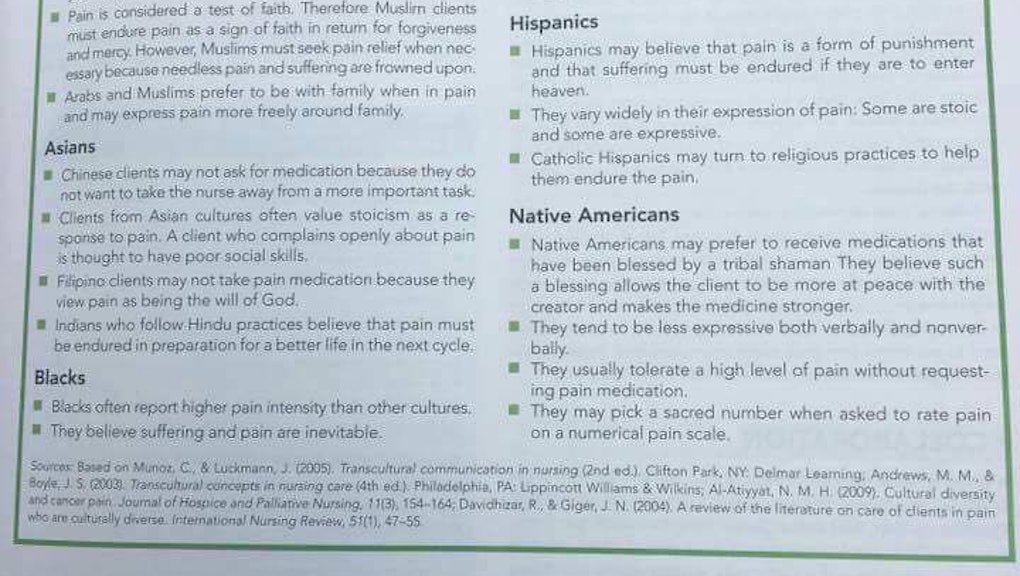 On Thursday, Pearson, an education publishing company, apologized for publishing a nursing textbook section that contained racist material about treating patients from different cultural backgrounds who have acute and chronic pain.

A page from Nursing: A Concept-Based Approach to Learning began drawing criticism on social media Monday, when Facebook user Onyx Moore published a post about the book on their page.

In the section “Cultural Differences in Response to Pain,” the book advises the reader that a “client’s culture influences their response to and beliefs about pain.” The author goes on to categorize these differences in the following broad subsections: “Arabs/Muslims,” “Asians,” “Blacks,” “Jews,” “Hispanics” and “Native Americans.”

While differences in cultural attitudes towards pain are an important topic in medical programs, we presented this information in an inappropriate manner. We apologize for the offense this has caused and we have removed the material in question from current versions of the book, electronic versions of the book and future editions of this text. In addition, we now are actively reviewing all of our nursing curriculum products to identify and remove any remaining instances of this inappropriate content that might appear in other titles. We will continue to provide updates on our progress. This material does not reflect our values as a company and how we want to serve students. We always welcome feedback and we appreciate the concern shown by the students who raised this issue.

Going forward, the company states that it will recall any books that have this content printed in them. When asked how the material was published in the first place, Overland added, “We are working with our editorial teams as we speak to determine that.”

Some of the outrageous beliefs in the textbook include the following ideas: So-called “Arabs/Muslims” “may not request pain medicine but instead thank Allah for pain if it is the result of a healing medical procedure”; Filipino patients see pain as “the will of God”; and “Blacks” believe “suffering and pain are inevitable.”

In their Facebook post, Moore broke down why the claims made in the textbook were so problematic. “This chart lumps together various groups whose belief systems vary widely,” Moore wrote. “Native Americans are not a monolithic group, so you can’t make a generic list of what is culturally sensitive to them. Asia is a huge country and the chart completely glosses over that while leaving out countless groups in an attempt to convey the message quickly,” Moore explained further.

The textbook author also failed to explain that individuals of different racial backgrounds can identify as Jewish or Muslim. “So what happens if a Black Jew comes in? Or a Black Muslim?” Moore continued.

The misinformation in the textbook is a reflection of how the medical field has historically been biased against people of color. Research shows physician bias has existed when it comes to how people of color are treated for pain. For example, a 2016 study in the journal Proceedings of the National Academy of Sciences found that black patients are widely seen as being less sensitive to pain than white patients. A 2017 University of Virginia study reported that physicians may overestimate and underestimate Asian-American pain.

Even though Pearson quickly responded to the criticism, many are putting pressure on the publisher to find out how the material made it to the printing press.

This is another example of how cultural bias permeates different industries in America. And when it comes to public health, this misinformation is a disservice to nursing practitioners and their patients.