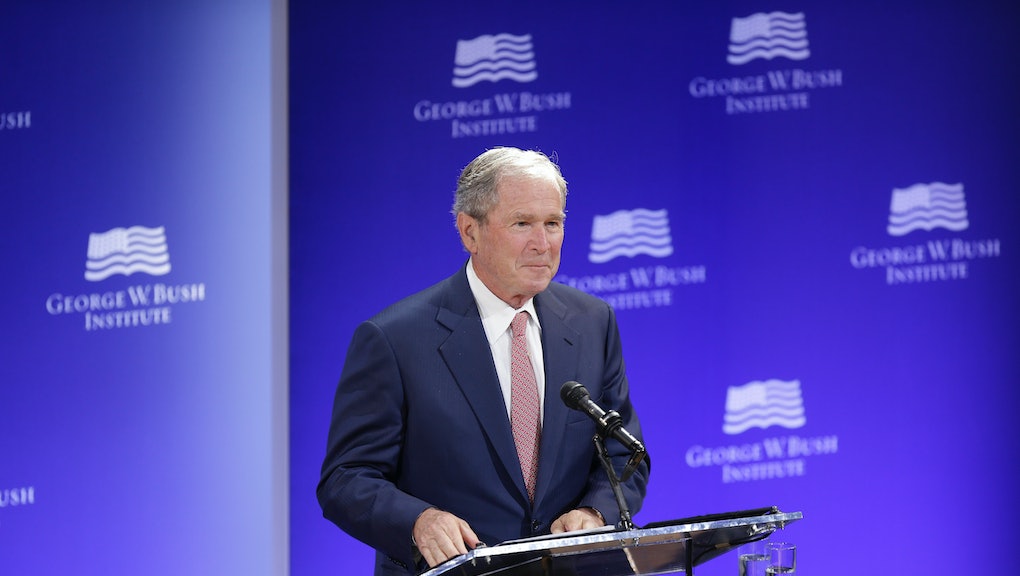 George W. Bush jabs at Trump’s America: “Bigotry or white-supremacy in any form” is un-American

Former President George W. Bush on Thursday took multiple jabs at Donald Trump’s America — without mentioning him by name — decrying the rise in nationalism and bigotry he says puts democracy at risk.

The speech was delivered at a forum in New York sponsored by the George W. Bush Institute, a policy institute that’s part of his presidential library.

Bush lamented the rise in nationalism and trade protectionism, condemned the bigotry and anti-immigrant rhetoric that’s risen to the fore and agreed with intelligence community conclusions that Russia meddled in the 2016 presidential election. These are all policies Trump has either pushed or engaged in throughout his political rise and since he took office in January.

“We’ve seen nationalism distorted into nativism, forgotten the dynamism that immigration has always brought to America,” Bush said. “We see a fading confidence in the value of free markets and international trade, forgetting that conflict, instability and poverty follow in the wake of protectionism.”

“In all these ways, we need to recall and recover our own identity,” Bush said.

“Bigotry or white supremacy in any form is blasphemy against the American creed,” Bush said.

And he expressed frustration with the rise of fake news, a concept Trump pushes on almost a daily basis.

Ultimately, Bush said bullying is on the rise and the country needs “positive role models ... in our public life” — one of the most stinging veiled swipes at Trump, who uses his platform to lodge personal insults and attacks at anyone he feels has wronged him.

“Our young people need positive role models,” he said. “Bullying and prejudice in our public life sets a national tone, provides permission for cruelty and bigotry, and compromises the moral education of children. The only ay to pass along civic values is to first live up to them.”