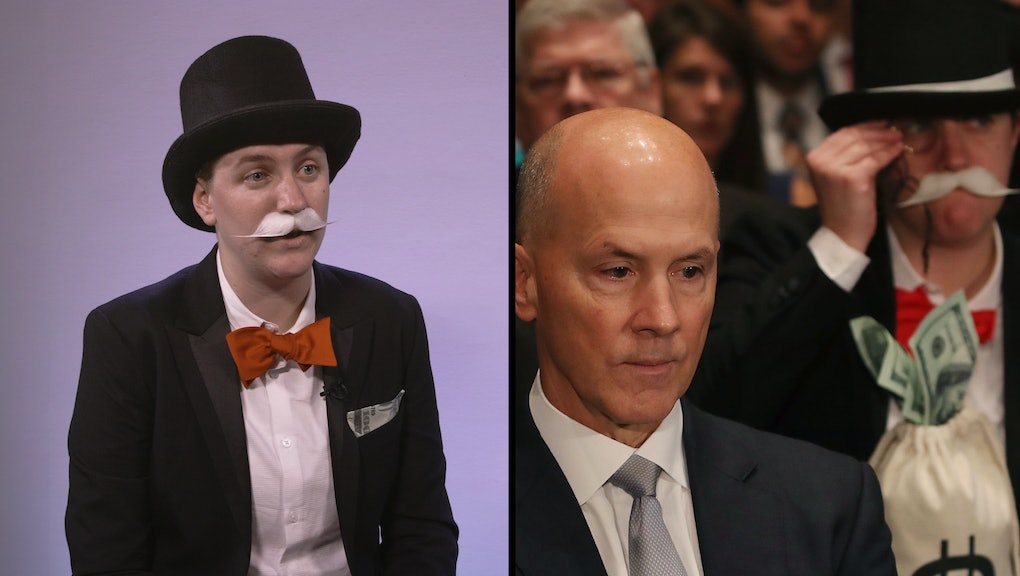 How do you educate people about something extremely boring — but extremely important? Put it to music? Tell jokes? For Amanda Werner, a campaign manager for Americans for Financial Reform and Public Citizen, the answer was a bit more dramatic: gate-crash and photo-bomb one of the biggest congressional hearings of the year — featuring resigned Equifax CEO Richard Smith — dressed as Rich Uncle Pennybags, an act of “cause play,” aka dressing in costume for a cause.

Werner, who goes by the pronouns “they” and “them,” is trying to get the word out about “forced arbitration,” whereby customers unwittingly surrender their rights to take a company to court when they check that “I agree” box to accept terms of agreement. (Similar clauses in employment agreements reduce workers’ rights to sue.)

These clauses were inserted, arguably surreptitiously, into the terms agreements that customers signed at both bank Wells Fargo and credit bureau Equifax. As Werner’s organization sees it, these mandatory arbitration clauses amount to corporate “get-out-of-jail-free cards” for said companies, because they make it so hard for aggrieved customers to band together in class-action lawsuits, where they might have a stronger chance of winning.

A major Senate vote on rules to limit these arbitration clauses is expected Tuesday, Oct. 24.

Mic sat down with Werner ahead of the vote to talk about the viral stunt — and how to harness internet fame into sustainable activism. This interview has been edited for length and clarity.

Mic: What is cause-play, exactly, and how long have you been doing it?

Amanda Werner (aka Monopoly Man): It’s basically dressing up in costume for a cause, for some sort of activism. In the progressive tradition there’s always been kind of this over-the-top costume piece. In fact, my organization previously has done actions where people have dressed up.

Somebody did a “Let It Go” parody about the TPP. We had done a mock wedding between Trump and Wall Street earlier in the year... we like to bring fun in wherever we can. But I think this particular type of cause-play has definitely taken on a whole new steam.

Why Monopoly Man? How does he relate to Equifax?

Monopoly Man crashed the Equifax hearing a couple of weeks ago to call attention to Equifax and Wells Fargo’s use of forced arbitration as a get-out-of-jail-free card, so that’s where the Monopoly theme came in.

We had actually done this the day before as part of an action. We had gone to every single Senate office and dropped off these get-out-of-jail-free cards to raise awareness about a bill that’s trying to take away our right to a day in court. The next day we decided to try and crash the hearing and basically try to photobomb [Equifax CEO] Richard Smith to call attention to it, because it is really hard to get any kind of press attention in Washington.

What’s the “ripoff clause”? How long has that been a focus of your activism?

I’ve been at this for about two years trying to raise awareness about forced arbitration and trying to support new consumer protection from the [Consumer Financial Protection Bureau]. The number one challenge has just been that people’s eyes kind of glaze over when you use the word “arbitration.” They don’t understand what it means.

So we’ve been using the term “ripoff clause” because I think viscerally, that makes a lot more sense to people. Basically, it’s is when companies bury in the fine print this very technical legal language that takes away your right to sue them and instead makes you go head-to-head with a company in forced arbitration, where they get to pick the person who decides the case, what rules apply and it’s very hard to appeal a bad decision.

What did the cause-play experience teach you? What was the hearing like?

Honestly the morning of, I didn’t actually think we’d get a seat. I wasn’t fully prepared, but luckily it worked out pretty well. What was really key to it taking off is that we were prepared on the back end with media. Every time the camera wasn’t on me in the hearing, I was on Twitter searching Monopoly Man and tweeting at everyone to make sure they knew why I was doing it.

So I think laying that groundwork was really helpful. We were able to control the narrative a little bit more and make sure it wasn’t just something people laughed at for one day, but turned into a movement.

The main thing I did all throughout, if you actually watch the whole two hours, I was constantly going, making funny facial expressions, reacting to his testimony and just trying to entertain people. I know congressional hearings are not incredibly interesting, but we wanted to make sure people were watching this one.

You use gender-neutral pronouns. How does that affect the experience of going viral?

I was expecting to become internet famous, but I wasn’t really prepared for it. On the gender front I’m actually trans and nonbinary. I use gender neutral pronouns. But I actually wasn’t out at work because it just hadn’t come up yet, I was eventually going to do it but I wasn’t quite ready. Suddenly I had reporters asking me about it.

Just last week on National Coming Out Day, I finally sent the email and was like alright everybody it’s out there, and it’s just been a lot to kind of handle at once. But I think I felt a sense of responsibility to the community to be an active voice, now that I have some sort of a platform.

How long have you engaged in this kind of activism?

Anyone who’s known me for a long time knows me as being this troublemaker and this shameless agitator. That’s definitely been who I’ve been since I was a child and I know a lot of my friends from high school in particular are like, “Oh, of course you did that,” when they found out about the Monopoly Man.

When I was 14 years old, and also brand new to all of this, I had just learned about sweatshop labor and I actually staged a protest outside the Disney Store. Before I was protesting outside, I actually had gone inside the store, had printed out these little slips of paper that said this clothing item was made in a sweatshop and just stuck it in the pockets of all the clothes.

Back when I was 14, it was pretty clear to me that corporate America is doing a lot of damage. I think white supremacy, you know, patriarchy, all the different kinds of oppression, are all very tied up in corporate power and that’s one reason why I’m focused on it. It’s about respecting people’s fundamental value as human beings and not exploiting them for labor or for any other purpose.

What can consumers do about forced arbitration?

There’s not a lot of power in individual consumers. Even if you found an arbitration clause, you couldn’t convince them to take it out. You could maybe opt out of using the product, but because they’re everywhere, you essentially have to opt out of the marketplace, which just isn’t realistic.

The No. 1 thing folks can do is to support federal reforms in this area, and that’s why I’m supporting the Consumer Financial Protection Bureau’s arbitration rule. It actually restricts banks’ and lenders’ use of forced arbitration, and restores our right to join together for our day in court.

That would, in fact, prevent companies like Equifax and Wells Fargo from doing what they’ve been caught doing. It will be the law in March, but right now Republicans in the Senate are leading a repeal effort that would not only block the CFPB from going through with the rule, it would also stop them from doing anything similar.

So it would essentially enshrine Equifax’s get-out-of-jail-free card forever. The most effective thing you could do is call your senator, write your senator, sign petitions, stage actions and tell them to vote “no” on S.J. Res. 47. It’s crucial to consumer rights.