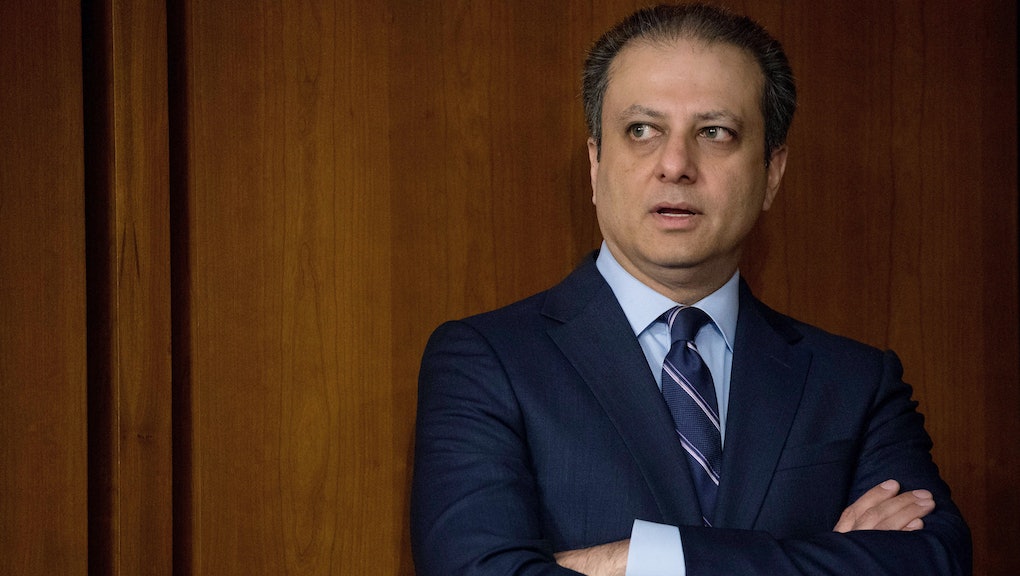 According to former United States Attorney Preet Bharara, President Donald Trump has been personally interviewing candidates for United States attorney positions in New York and Washington, creating the potential for a conflict of interest.

“I understand that he’s personally interviewed the potential applicants for U.S. attorney in Manhattan and Brooklyn and one in Washington, D.C. — which happen to be places where Donald Trump has property and assets and companies — and not interviewed personally U.S. attorneys for other positions,” Bharara told CNN.

One Washington property, the Trump International Hotel on Pennsylvania Avenue, is at the center of a federal lawsuit that accuses the president of violating the emoluments clause of the Constitution by accepting payments from foreign leaders through their stays at his hotel.

“I think [Trump’s personal interviews with candidates for these positions] reasonably raises a number of questions,” Bharara told CNN.

Renato Mariotti, a former federal prosecutor, told Mic what some of those questions might be.

“It’s unusual for the president of the United States to personally interview U.S. attorney candidates,” said Mariotti, who is now in private practice. “Typically, United States attorneys operate independently — and the Department of Justice operates independently — of the rest of the executive branch when it makes prosecutorial decisions. The mere fact that the president is personally interviewing U.S. attorneys does not in and of itself mean he’s talking to them about the substance of prosecutorial decisions they might make, but creating a personal relationship with them could influence their decisions in the future.”

One Democratic senator implied that the president’s actions may lead to certain members of Team Trump skirting federal prosecution pertaining to allegations of collusion with Russia during the campaign.

“What’s most alarming about the president interviewing these particular candidates for U.S. attorney positions is that these chief federal prosecutors are going to decide whether to indict Trump campaign advisers or staff if there’s collusion between the Trump campaign and Russians proven, and possibly consider criminal charges against the president himself,” Sen. Richard Blumenthal of Connecticut told CNN.

Blumenthal told the network that he had started conversations with fellow senators about “potentially blocking any nominees who have been interviewed by the president.”

But Mariotti didn’t necessarily agree that blocking those candidates was the solution.

“I would have serious concerns around any candidate who was personally interviewed by Trump,” he said. “However, whether I would nix any particular candidate, I couldn’t say — but it’s something we should seriously be concerned about. Senators like Mr. Blumenthal should be asking these candidates very difficult questions about it, and I would be very skeptical of a candidate that had a personal interaction with the president.”

The roster of candidates who may have personally met with the president is currently unknown.

For its part, the White House is defending the propriety of Trump’s personal meetings with those candidates, characterizing Blumenthal’s concerns as another instance of Democratic obstruction.

“These are individuals that the president nominates and the Senate confirms under Article II of the Constitution,” a White House official said to CNN. “We realize Senate Democrats would like to reduce this president’s constitutional powers, but he and other presidents before him and after may talk to individuals nominated to positions within the executive branch.”