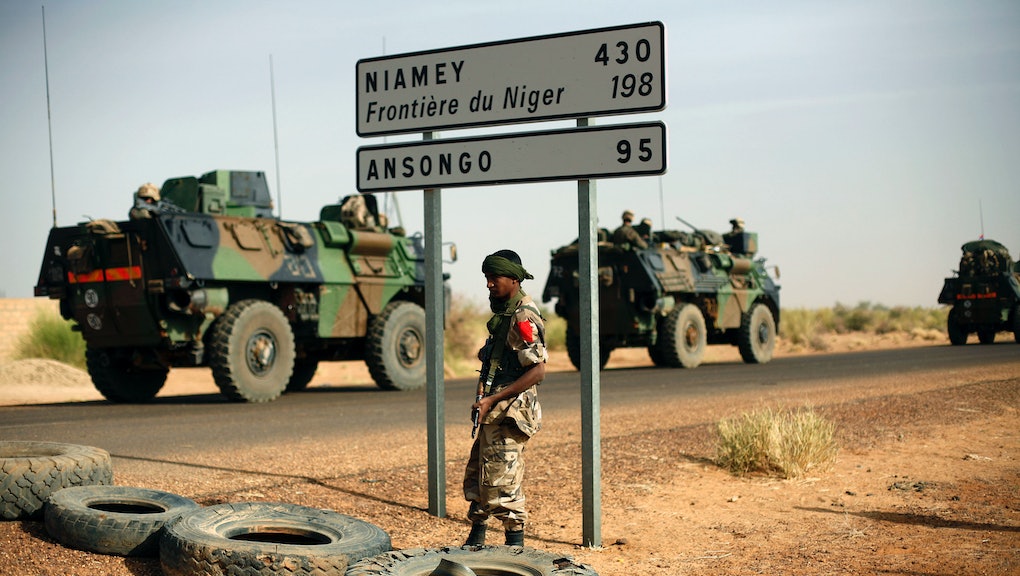 Attack on US soldiers in Niger: Here’s why the troops were there in the first place

Questions are still arising after four U.S. soldiers were killed in Niger in early October during an apparent ambush — the deadliest combat mission to take place during Trump’s presidency thus far.

U.S. Defense Sec. Jim Mattis said Thursday that the military did not have all the “accurate information” yet on the attack, with gaps still remaining regarding the unanticipated nature of the firefight, the delay in rescuing the victims and how one of the slain soldiers, Sgt. La David Johnson, became separated from the group and was only found 48 hours later.

President Donald Trump’s administration has been criticized for not being more forthcoming about the attack, and Trump himself has instead made a controversy out of his discussions with the victims’ families and the differing accounts of what took place during those conversations. Sen. John McCain, who serves as chairman of the Senate Armed Services Committee, threatened to subpoena the Trump administration for information about the attack, saying that the Congressional committee has not been kept informed about ongoing missions.

Though it took Trump 12 days to address the Niger attack, Politico reported Wednesday that a presidential statement on the attack was drafted immediately after it took place but was never released, prompting further speculation over why the president has remained silent.

But why were the U.S. troops even in Niger in the first place? Here’s what to know about the military’s presence in the region.

The U.S. first established their presence in Niger in 2013, when former President Barack Obama announced that an additional 40 troops would be deployed to the African nation — putting the total number of troops at 100 — to help establish a new base in the region.

The military’s interest in Niger and the surrounding region is due to the influx of affiliate terrorist groups in the area. Some of the groups operating in the region include the Islamic State group, also known as ISIS, in the Greater Sahara — which is the group considered most likely to be behind the deadly attack on U.S. soldiers — the al-Qaida-affiliated extremist group Ansar Dine and local al-Qaida group al-Qaida in the Islamic Maghreb. The country also borders Nigeria, where Boko Haram is based, and Libya, where ISIS fighters have begun to regroup after being forced out of Syria and Iraq.

In addition, CNN noted, Niger, along with Mali and Chad, is seen as part of a transit route used by local ISIS and al-Qaida affiliates into northern Africa, where they can generate revenue and move fighters north into Europe and the West.

Since 2013, the U.S. military’s presence in the area has expanded to approximately 800 troops, CNN reported.

“Niger is an important partner of ours, we have a deep relationship with them,” Lt. Gen. Kenneth McKenzie, the director of the Joint Staff, told reporters at the Pentagon Thursday, as quoted by CNN. “We are committed to that relationship, we believe that they are as well. In fact, I think it’s a very good success story.”

According to CNN, the U.S. military’s role in Niger and the surrounding region is largely to assist French and Nigerien troops — providing intelligence, surveillance and reconnaissance rather than engaging in offensive combat missions.

“U.S. forces are in Niger to provide training and security assistance to the Nigerien Armed Forces, including support for intelligence, surveillance and reconnaissance efforts, in their efforts to target violent extremist organizations in the region,” U.S. Navy Lt. Cmdr. Anthony Falvo, a spokesman for U.S. Africa Command, said, as quoted by CNN.

As part of its surveillance mission, the U.S. is currently expanding their drone operations in Niger and moving them from the nation’s capital, Niamey, to the more centrally located Agadez. The $100 million airbase is slated to be “the biggest military labor troop project in U.S. Air Force history,” CNN reported, and ABC News noted that many of the 800 troops deployed in the country are working on constructing the new drone base or running the current surveillance drone mission in Niamey.

Fewer than 100 of the troops, according to ABC News, are “Green Berets” — including two of the four soldiers who were slain in early October. The soldiers, who are part of the Army Special Forces, are highly skilled soldiers who are often tasked with training foreign militaries, such as those in Niger, in fighting skills.

The soldiers involved in the Niger ambush were likely on a “train, advise and assist” mission with the Nigerien forces, ABC News noted, though it is unclear what their specific mission was at the time. The ambush took place during a routine patrol near the Niger-Mali border, Reuters reported.

“‘Train and assist’ is not a classroom exercise. It’s typically out in the field, learning tactics and improving capabilities of indigenous forces like the Nigeriens,” former National Counterterrorism Center director Matthew Olsen told ABC News.

For those outside the Pentagon, however, questions still remain about how exactly the U.S.’ role in Niger is proceeding. According to the Washington Post, Sen. McCain said he knew “very little” about the military’s mission there, while Sen. Lindsay Graham said his knowledge was “not in any great detail, just in general.”

“I’m all for going after terrorists,” Graham said, as quoted by the Post, “but I want to know before I read about it in the paper where our people are and what they’re doing.”

The U.S. is just one of several countries with a presence in Niger, with the bulk of the military operation in the area conducted by the 5,000 French forces in the region, according to CNN. The French military operation is also aided by Germany, Mali, Niger and other regional forces.

Until recently, one of the neighboring countries with a military presence in Niger was Chad — whose recent exit, MSNBC host Rachel Maddow theorized Thursday, could possibly have led to the recent attack on U.S. troops.

The French consider Chad to be their primary ally in the regional fight against terrorism, Reuters reported. Maddow noted Thursday that Chad’s military has been an essential force in the Nigerien fight against terrorism and a key ally for the United States. The U.S.’ relationship with Chad, however, was darkened by Trump’s decision to include the country in his most recent travel ban — apparently because the country had run out of paper to print passports. The decision was widely criticized by those with knowledge of the region.

“This is a very draconian move that could put Americans in harm’s way,” Matthew Page, the U.S. State Department’s former expert in the region, told the New York Times about Chad’s addition to the travel ban list.

Within days of Trump adding Chad to the travel ban, the country began to withdraw its troops from Niger, Reuters reported, weakening security in the region and causing Nigerien residents to flee to other areas for safety. The withdrawal of Chad’s troops likely makes the area more vulnerable to attacks, Maddow speculated, including the deadly ambush on U.S. troops.

“So, no wonder the president doesn’t want to talk about [the ambush],” Maddow said. “The AFRICOM spokesperson from the U.S. military has said the death of the four American soldiers ‘was not expected.’ And troops had done more than two dozen patrols in the last six months with no problem. But this one was different. Certainly in its result. Potentially in its cause.”