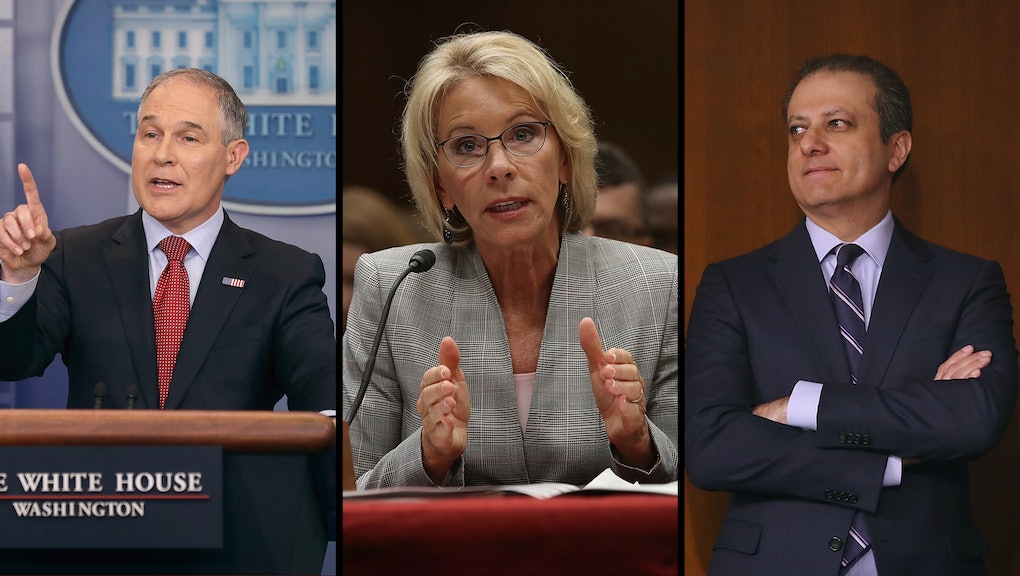 While You Weren’t Looking: 5 things from this week that didn’t involve Trump’s condolence calls

While the media spent the past week fixated on the feud between President Donald Trump and Rep. Frederica Wilson over what Trump did or did not say in a phone call with the family of a fallen soldier, a lot of news went under-covered.

Here are five stories from the Trump administration you may have missed this week.

A federal court in D.C. heard arguments this week about whether or not the Trump administration could keep a 17-year-old undocumented girl in federal custody from obtaining an abortion.

Reports suggest that judges appeared unconvinced by the Department of Health and Human Services’ argument that the girl did not have the same rights as an inmate seeking an abortion because she had the option to leave the country.

The Trump administration is appealing a lower court ruling that instructed them to “promptly and without delay” allow the unidentified teen to obtain an abortion.

The women’s rights group Equal Means Equal has sued the Department of Education over its decision to rescind Obama-era rules about the way that campuses must handle sexual assault allegations.

In September, DeVos rolled back guidelines created by the Obama administration that forced colleges to create certain basic processes for dealing with sexual assault allegations.

The suit alleges the DeVos’ actions violated Title IX laws by effectively creating tougher standard of evidence for sex related infractions as opposed to those infractions based on race or ethnicity.

DeVos claimed that her Education Department would eventually replace the Obama era rules with a new and better policy. So far, no such policy has been announced, even though the previous guidelines are no longer in effect.

Trump’s new selection to head the White House Council on Environmental Quality once called belief in climate change a “kind of paganism” for “secular elites,” according to CNN.

Kathleen Hartnett White, the former head of the Texas Commission on Environmental Quality, was on a conservative online radio program in 2016 when she made the comments to the host.

“There’s a real dark side of the kind of paganism — the secular elites’ religion now — being evidently global warming,” White said.

According to former United States Attorney Preet Bharara, Trump has been personally interviewing candidates for the position of U.S. attorney in Brooklyn, Manhattan and Washington, D.C.

The decision to personally vet U.S. attorneys in those two jurisdictions creates a potential conflict of interest for a president who may one day be investigated by those same attorneys for his New York-based businesses.

“I understand that he’s personally interviewed the potential applicants for U.S. attorney in Manhattan and Brooklyn and one in Washington, D.C. — which happen to be places where Donald Trump has property and assets and companies — and not interviewed personally U.S. attorneys for other positions,” Bharara told CNN’s Wolf Blitzer on The Situation Room Wednesday.

EPA to restrict settlements with environmentalists

“We will no longer go behind closed doors and use consent decrees and settlement agreements to resolve lawsuits filed against the agency by special interest groups,” Pruitt said while announcing the new policy.

Industry groups, along with Republicans, previously accused the Obama-era EPA of using legal settlements to get around the legislative process in order to force through new regulations and completely bypass the normal regulatory due process.