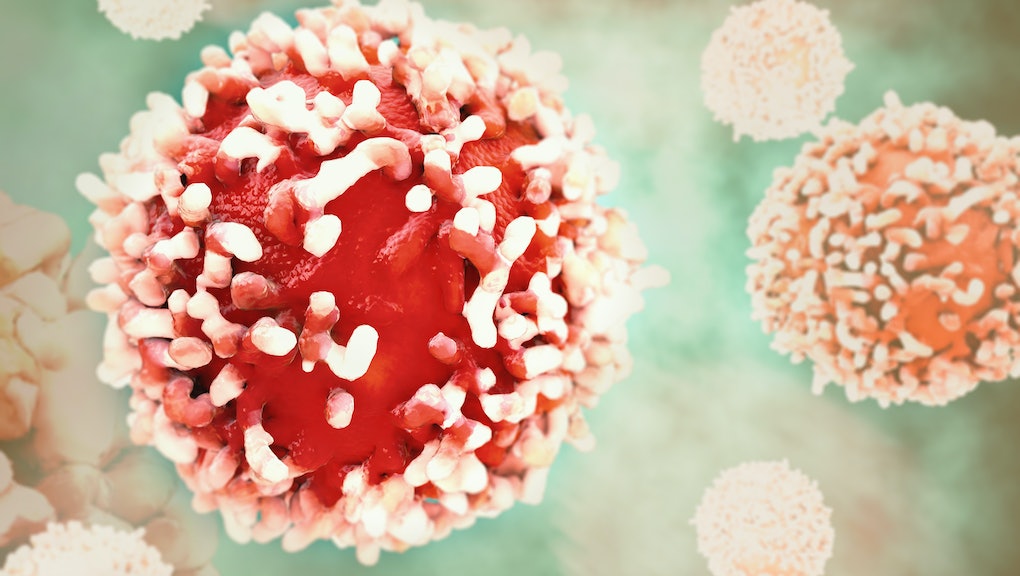 Scientists have found a way to make cancer cells kill themselves in multiple ways, simultaneously.

“It’s like committing suicide by stabbing yourself, shooting yourself and jumping off a building all at the same time,” Marcus Peter, the study’s lead scientist at Northwestern University, said in a news release.

Peter said he thinks the mechanism by which these cells destroy themselves might be what he calls an “ancient kill switch.” It could be what prevented cancer from causing the extinction of multicellular organisms in the period of several million years before they developed immune systems.

An “ancient kill switch” may be what prevented cancer from killing off multicellular organisms eons ago.

The treatment is “based on mechanisms that are active in every cell, that scientists like me have been studying for a long time,” Peter said in a phone interview with Mic. “We all believed we knew how these work and now we’re discovering that we can basically hijack the mechanism and do something else with it that most of us did not anticipate.”

Peter’s team introduced to cells a type of ribonucleic acid — which, like DNA, is a vital molecule essential for life — altering the way they behave. They found that some of these special strands of “small interfering RNAs,” which can be used to silence genes, triggered this “ancient kill switch” theorized in the news release, causing the cancer cells to kill themselves.

The sequences of RNA “kill the cells by simultaneously eliminating the genes required for cell survival,” the news release said. “By taking out these survivor genes, the assassin molecule activates multiple death cell pathways in parallel.”

The preclinical trial, which tested the method on mice with human ovarian cancer, significantly reduced tumor growth without any toxicity to the mice themselves. Peter said they have also tested additional small RNAs that are “a hundred times more toxic” than the ones described in the published study — and they, too, have not shown any toxicity in the mice.

What this means for humans

Those early results are promising, but Peter cautioned against getting overly excited or characterizing this as a silver-bullet cancer treatment in humans.

“Speculation is always dangerous, because if I do that, then I stick my neck way too far out and everybody’s going to try to chop it off,” he said. “That’s how it works.”

Peter and his team are currently in the process of optimizing their method for clinical human trials. That’ll take a lot of work — “five to 10 years, if all goes according to plan,” he said — and a lot of money.

Early results are promising. But optimizing the method for clinical human trials will take a lot of work, time and money.

Before trials can begin, they’ll have to figure out a way to more easily deliver these siRNAs to cancer cells. In the lab, they have been able to use a certain type of nanoparticle that works pretty well, but they’re not perfect. Not yet.

“They are still very difficult for clinical use because they have to be prepared fresh every time, by an expert,” Peter said. “It’s not something that you put in a vial, on the shelf, and then the physician grabs and injects.”

Even though it’ll take some time to continue developing this method, the burden of cancer — which is the second-leading cause of death worldwide, according to the World Health Organization — is not lost on Peter.

“The worst thing that happens when you hint at an upcoming treatment is that I’m going to get drowned in emails from all over the world — it has already started — from desperate people whose wife, husband, grandfather has been diagnosed and they’re pleading for help and volunteering themselves for clinical trials,” Peter said. “It happens every time, and every time, believe me, I’m sitting there, crying. This is the worst part of going public.”