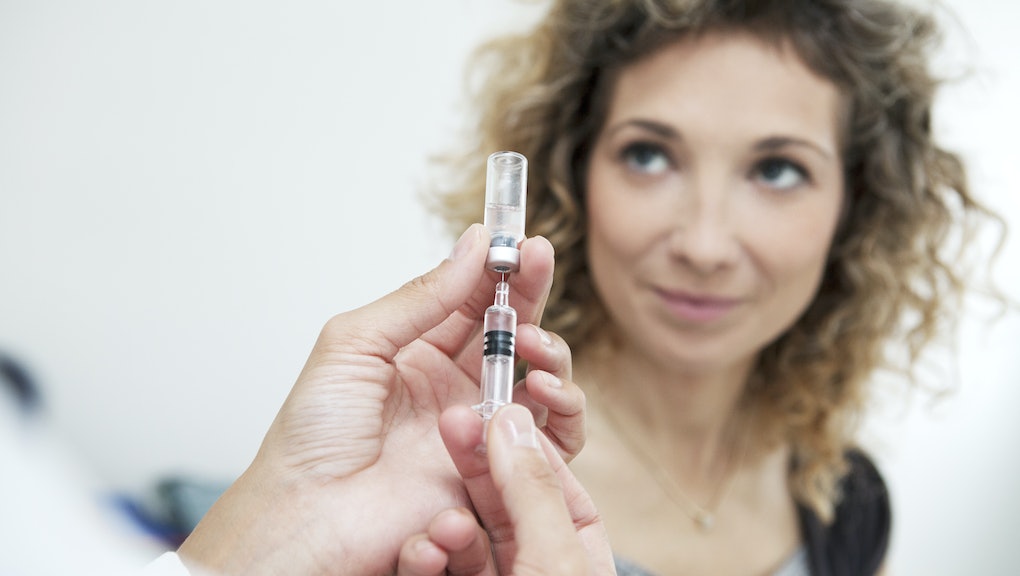 Why are Americans still so afraid of the flu vaccine?

Tens of thousands of people die the U.S. every year from influenza-related complications. The Centers for Disease Control and Prevention recommends that everyone — with a few minor exceptions — 6 months and older get the flu vaccine. Most insurance plans cover the flu vaccine in its entirety. Yet only 43.3% of adults actually got the vaccine during the 2016 flu season.

That number might sound high — and it’s certainly better than zero — but compared to children’s vaccination rates from 2015 for other illnesses such as polio (93.7%), hepatitis B (92.6%) and chickenpox (91.8%), the rates for flu vaccination are way behind.

So, what’s going on? Why aren’t more Americans protecting themselves against this preventable illness? According to experts, it’s a thorny issue. So, let’s break it down and answer some common questions about the flu vaccine.

Why do I have to get the flu vaccine every year?

One of the biggest roadblocks seems to be the idea that the flu shot needs to be administered annually to be effective.

“That implies that it’s not very good, because other vaccines you don’t need to get every year,” Paul Offit, director of the Vaccine Education Center at the Children’s Hospital of Philadelphia and the co-inventor of a rotavirus vaccine, said in an interview Wednesday. “You get them and then it seems that you’re protected for a long period of time, sometimes a lifetime.”

But the perception that flu vaccines aren’t effective is mostly based in a misunderstanding of how influenza spreads around the globe. The reason you have to get a flu vaccine every year is because the strains of influenza circulating are different from one year to the next.

In order to determine which strains each year’s vaccine will protect against, the World Health Organization helps track global data regarding the spread of influenza, allowing it to predict which strains will be a problem in the upcoming flu season with pretty impressive reliability. But’s it not perfect.

“Some years we get about 85% [efficacy], some years we only get it about 60% right — and I think that can be really confusing to the American public,” Sophie Godley, clinical assistant professor at Boston University’s school of public health, said in an interview Tuesday. “Because then they say, ‘Well, why am I taking this vaccine that isn’t perfect? Why isn’t it perfect?’”

It’s a mindset that makes a certain amount of sense, especially since most people who get influenza won’t die from it. But for infants, elderly people and those with compromised immune systems, influenza is more likely to be fatal.

“We play a dangerous game when we choose not to get an influenza vaccine, because influenza can kill you,” Offit said. “There’s rarely a year in our hospital when a child doesn’t die of influenza. During the pandemic flu year, we had five deaths, invariably people who weren’t vaccinated. The flu vaccine is recommended to everyone over 6 months of age in this country for a reason. And the reason is it can save your life.”

Even if you aren’t at a high risk of developing complications from influenza, your own vaccination could still be lifesaving for someone else. Getting vaccinated means lowering the chance that you’ll catch and pass influenza on to those around you who may be at a greater risk.

“You could argue that a virus that kills tens of thousands of people a year and causes hundreds of thousands to be hospitalized, 40% [efficacy] is better than 0%,” Offit added.

Failure to vaccinate against the flu isn’t simply a matter of negligence: There are also a great number of people who misunderstand very basic things about the safety and efficacy of the flu vaccine.

“We all have a friend or we all know someone who claims that they got the flu vaccine and then they got sick,” Godley said. “And what they’ve done is put those two experiences together in their minds, and they’ve created a [causal relationship]. They believe that getting the vaccine caused them to become sick.”

It should be common knowledge at this point, but it bears repeating: It’s simply not possible for the modern flu vaccine to give you the flu.

“There is no live influenza in the vaccine,” Godley said. “That’s not how vaccines work. They prepare your immune system so that in the case you’re exposed to the actual disease, your body produces this response and you don’t get sick.”

So, what about all those anecdotal horror stories from people who claim their side effects from the vaccine were just as bad as the flu itself?

“You probably were already sick when you got the vaccine,” Godley said. “The fact that you got the flu even though you got a vaccine does not mean it didn’t prevent some other flu from coming at you, right?”

One big myth that anti-vaccination advocates like to peddle is that vaccines contain neurotoxins, like mercury. What they’re talking about is thimerosal, a preservative that’s no longer used in vaccines, except for in very small quantities in certain types of the flu shot.

One component of thimerosal is ethylmercury. The type of mercury in thermometers and modern compact fluorescent lightbulbs is methylmercury. The two are not the same, but you can see where the fear might be coming from. The Vaccine Education Center has a page explaining this controversy.

Despite the good science out there proving the safety of vaccines, Offit said the public’s distrust is not at all unusual.

“We ask people in the U.S. to give their children 14 different vaccines in the first few years of life — that’s more than any other country,” Offit said. “There can be as many as 26 inoculations during that time that most people don’t see, using biological fluids that people don’t understand. So I think it’s not at all surprising that there’s hesitancy.”

Godley agreed with Offit — but she added that it’s not as though there are an equal amount of vaccine advocates as their are anti-vaxxers, saying that dynamic was a “false polarization.”

“When we actually interview people and survey people, there’s a strong subset of folks out there who actively resist vaccines,” Godley said. “And then there’s a huge range of people who have questions — and those are not the same audience, right? ... The larger percentage — which is where I think we need to be putting our energy — is with people who are just not 100% sure it’s a good idea. They’ve heard something, they feel sort of unsure about it — and those are the folks we need to reach and be really reassuring and be really strong advocates and say, ’Vaccines are incredible.’”

That’s a message both Offit and Godley intend on spreading.

“I think that you can say with confidence that vaccines are probably the safest, best-tested thing we put into our bodies,” Offit said. “They’re certainly safer than what you buy in the GNC center, which is an unregulated industry. This is a highly regulated industry.”