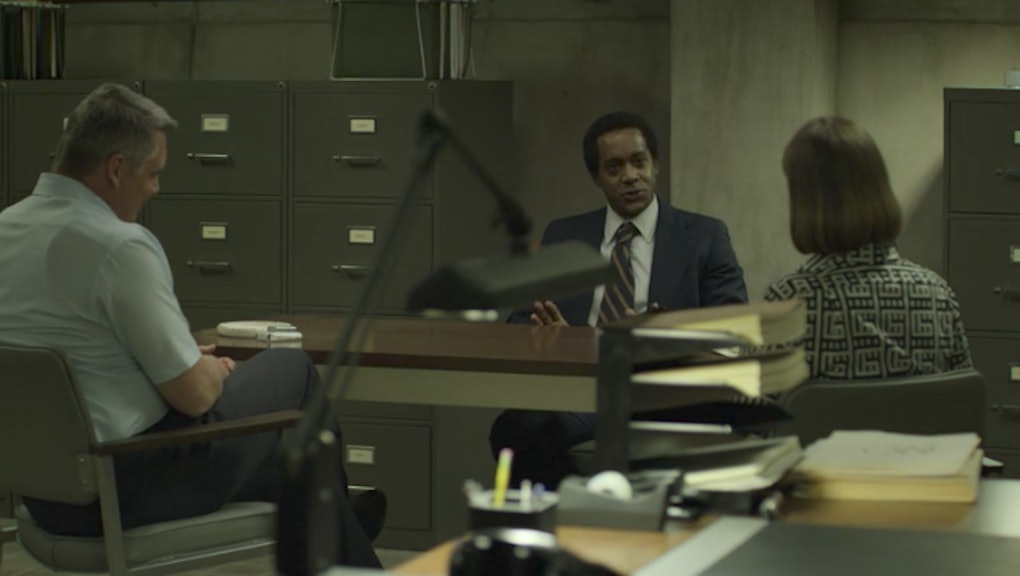 If you blinked, you might have missed it: The scene in episode eight of Netflix’s serial killer drama Mindhunter where the FBI’s Behavioral Sciences unit — consisting of Agents Holden Ford, Bill Tench and Dr. Wendy Carr, all of whom are white — briefly debates hiring a black agent for their team.

The group has been tasked with a job as grim as it is important. In 1977, as a new breed of killer gains prominence carving his way through the United States, the unit spends time interviewing convicted murderers like Edmund Kemper — who killed 10 people in California between 1964 and 1973, including his own mother — and Richard Speck, who killed eight female nursing students during a one-night rampage in Chicago in 1966.

The FBI’s goal is to gain insight through these interviews — specifically into the killers’ motives and psychology, toward assembling a profiling guidebook that police can use in investigations. It’s a task that requires almost constant cross-country travel and, perhaps more important, personnel that can handle the rigors of the job.

Enter Jim Barney — a black FBI agent who interviews to become part of the unit. The audience meets Barney toward the end of his meeting with Carr and Tench. We don’t get much time with his character. But it’s instantly clear that he is smart, charming, experienced, gets along easily with the other agents and is more than qualified for the work.

“He’s our best candidate,” Tench says after Barney leaves. “I think we should hire him.”

Yet hire him the team does not. “Our list of potential subjects are 80-90% white and probably racist,” Carr says.

“Does that mean no?” Tench replies.

“He could incite a response that affects the study,” Carr says.

“That means no,” Tench says, resigned. “Don’t put that on his assessment. We can’t be seen as racist.” The team goes on to hire an apparently less-qualified white man who is the son of their boss’s college buddy.

Racial bias in hiring is a well-documented phenomenon in the U.S. In the realm of low-wage labor especially, sociologists like Devah Pager have published multiple studies illustrating the barriers black applicants face to entry. Yet where many of these studies seem to support that employers’ discrimination is rooted in their own biases, Mindhunter is addressing something different. Fewer studies, for instance, explore employers’ decisions to avoid hiring black applicants because they’re scared of alienating their racist customers.

There’s an easy — if imperfect — parallel here. In a sense, the serial killers in Mindhunter are the Behavioral Sciences unit’s customers. The unit’s work relies on the killers’ willing participation. If the agents do anything to alienate their subjects — hiring a black man to interview them, for example — the subjects might not talk to them, and the agents will be out of a job.

As a result, the unit finds itself in a peculiar bind: perpetuating racist hiring practices not because of their own racism, but because they need to stay in the good graces of other racists. The result still reifies a racist status quo, of course: a nation characterized by a racially-stratified employment market.

Recent research may have documented this phenomenon as it manifests in the real world. The researchers behind a study published at Auburn University in 2015 sent more than 9,000 fake job applications to employers in Atlanta, Baltimore, Portland, Oregon; Los Angeles, Boston and Minneapolis. Some of the fake applicants — all of them fake recent college graduates — had names that were easily identified as black: DeShawn Jefferson, DeAndre Washington, Ebony Booker. Others had whiter-sounding names: Cody Baker, Jake Kelly, Claire Kruger.

“The black-named applicants got about a 14% lower callback rate [than white applicants],” Richard Seals, an economics professor at Auburn and co-author of the study, said by phone.

But the gap was especially stark in jobs with a customer focus, like sales. Black applicants in these fields got a remarkable 28% fewer interview offers than white applicants.

“Black applicants are being discriminated against,” added John Nunley, an economics professor at the University of Wisconsin - La Crosse, and another co-author of the study. “And that discrimination is concentrated in jobs that require customer interaction.”

The reasons why aren’t totally clear. But Seals posited that employers in customer-focused industries were declining to interview black applicants because they thought black workers might turn off their racist customers (Nunley noted this wasn’t totally conclusive. “We simply don’t know anything about [the customers],” he said).

It would be a tough decision to justify, were it so, and an even tougher issue to resolve. Few widely-publicized examples exist of this sentiment being expressed openly. One is the case of Jamilah DaCosta. In 2013, the Framboise Patisserie in Queens, New York, allegedly said they would not hire the then-25-year-old DaCosta as a “counter girl” because she was black, and “black workers in the front of the store would scare away customers,” according to the New York Daily News.

Agent Jim Barney seems to be a victim of similar logic on Mindhunter. Social scientists don’t have a specific term for this practice yet, according to Seals and Nunley. But the ambiguity surrounding it helps employers hide their own biases under a veneer of doing right by their work, all while blaming the prejudices of others and evading responsibility.

It’s also hard to dispute this logic as it is applied in Mindhunter. It is doubtless true that having a black agent interview racist white murderers would yield less insightful results than if a white agent did it. In the business of tracking down serial killers, that’s probably not a risk you want to take. Nevertheless, the show’s example demonstrates just how deeply entwined racism is with American culture, on a vast array of levels — and how hard the two will be to untangle as a result.

An earlier version of this article understated the differential in interview callback rates for black and white job applicants in the study.