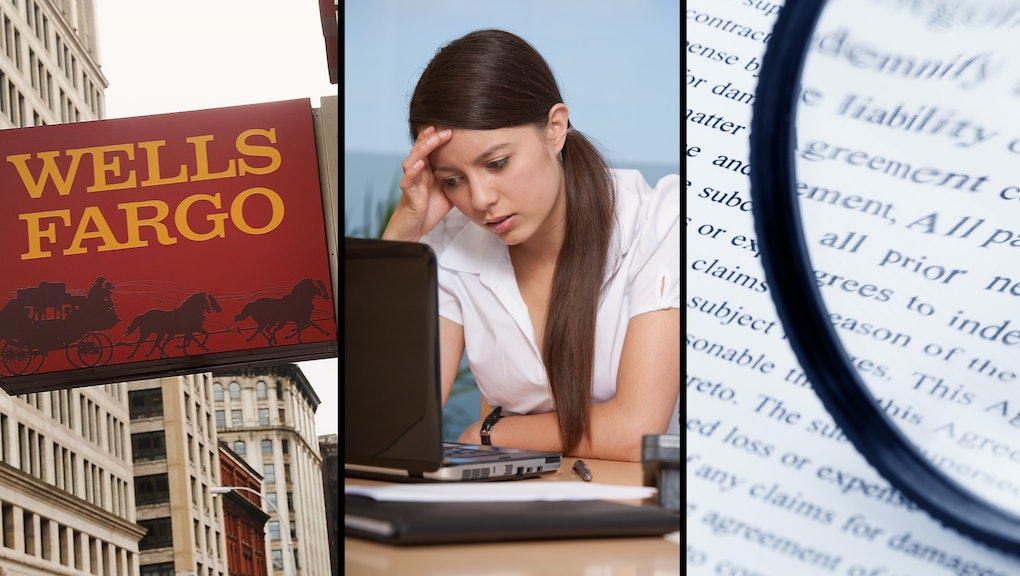 The Senate voted Oct. 25 to end a major consumer safeguard designed to stop banks and other financial institutions from slipping certain language into the fine print when you sign “I agree” (or check a box digitally) when buying a product or service. The rule senators eliminated would have protected consumers by making it easier to sue companies over wrongdoing — like Wells Fargo’s opening of sham accounts or Equifax’s security breach.

The vote was a 50-50 tie, with the deciding vote cast by Vice President Mike Pence — and senators who voted to remove the protection included Sen. Jeff Flake (R-Ariz.) and Sen. Bob Corker (R-Tenn.), as well as Sen. Dean Heller (R-Nev.), up for reelection in 2018. On Nov. 1, President Donald Trump signed the resolution officially nullifying the rule.

Announced by the Consumer Financial Protection Bureau in July 2016, the rule had banned the use of “binding arbitration clauses” in certain agreements. Binding or forced arbitration is when a consumer agrees to settle any legal disputes through an arbitrator selected by the company — instead of through the courts — thus waiving their right to join class-action lawsuits. Even users of Pokémon Go, for example, might not realize they have agreed not to sue the makers of the game (say, if they get injured while playing).

“Arbitration clauses in contracts for products like bank accounts and credit cards make it nearly impossible for people to take companies to court when things go wrong,” CFPB director Richard Cordray said in an announcement about the rule. “These clauses allow companies to avoid accountability by blocking group lawsuits and forcing people to go it alone or give up.”

The CFPB enacted the rule after commissioning a study comparing award outcomes from binding arbitration and class-action lawsuits. Over a five-year period studied, the lawsuits resulted in payouts to some 34 million consumers.

Arbitrators, or the other hand, awarded just $360,000 to 78 consumers — even though there were 1,000 cases during the two-year period. Consumer advocates say those large class-action payouts are necessary as a warning against predatory behavior.

“Just weeks after holding hearings on scandals of historic proportion, the Senate granted Equifax and Wells Fargo a ‘get out of jail free card,’” said Amanda Werner, of Americans for Financial Reform and Public Citizen.

“Rather than pass meaningful legislation to help the 145 million Americans harmed by the data breach, a slim Republican majority chose to take away our only chance at holding financial giants accountable.”

Critics of the CFPB rule said it went too far, and opened the door to frivolous lawsuits. Class-action lawsuits, Sen. Mike Crapo (R-Idaho) told the Associated Press, pay out an average of just $32, while attorneys make millions.

Yet a 2010 paper from the American Bar Association found that of the $33 billion in class-action awards paid out in 2006 and 2007, lawyers pocketed about 15%. “So who does forced arbitration help?” Sen. Sherrod Brown (D-Ohio) told the AP. “Wall Street banks and other huge corporations that never pay the price for cheating working people.”

Unfortunately, there’s not much that consumers can do about binding arbitration agreements, which are common in a number of industries beyond financial services — and also often show up in employment agreements.

“Even if you found an arbitration clause, you couldn’t convince them to take it out,” Werner said, in a previous interview with Mic. “You could maybe opt out of using the product, but because they’re everywhere, you essentially have to opt out of the marketplace, which just isn’t realistic. The No. 1 thing folks can do is to support federal reforms in this area.”

Coincidentally, Equifax will also report its earnings for the most recent quarter on Wednesday. It’s expected to have earned about $1.49 per share, more than last year, according to Marketwatch: Ironically, the breach could actually help the company by boosting demand for its products and services.