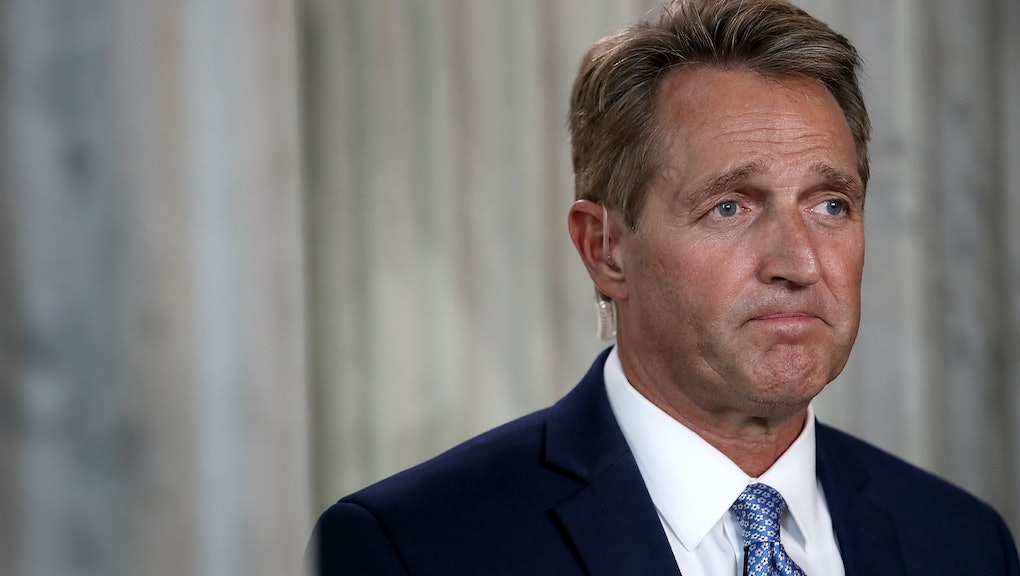 Dems were confident they could beat Jeff Flake. His retirement complicates their path to victory.

Democrats were excited to face GOP Sen. Jeff Flake in the 2018 midterm elections in Arizona, thinking Flake’s dismal approval ratings presented them with a good chance to oust a Republican senator.

But Flake unexpectedly announced his retirement on Tuesday, changing the dynamics of the contest and potentially complicating Democrats’ path to picking up the seat in November 2018.

Before announcing his retirement, Flake was one of the most vulnerable senators up for re-election — despite running in a state President Donald Trump carried in 2016.

Democrats thought Flake had a slim chance of making it through the GOP primary, allowing them to face off with Kelli Ward — a former Arizona state senator and far-right agitator who Democrats thought was too out of the mainstream to win a general election.

And if Flake did pull out a primary win, he’d emerge so bruised and battered that his general election chances would have been severely diminished.

“There was a slightly higher level of expectation that he would lose the primary than him being vulnerable in the general,” Achim Bergmann, a Democratic strategist who has run races in Arizona, said of Democrats’ expectations of Flake. “But Democrats were very confident” they could win either way, Bergmann told Mic.

Republicans say they are confident they can hold the seat now that Flake is gone.

“There’s no question in my mind that Arizona is a state that voted for President Trump,” National Republican Senatorial Committee chairman Cory Gardner told reporters, according to Politico. “It’s a Republican state, and it’s gonna be a focus of ours to make sure that it remains that way.”

And while more Republicans are likely to enter the race now that Flake is retiring, it’s still possible Ward, or another far-right Republican, could win the GOP nomination — which would hinder Republican efforts to hold the seat.

Former Maricopa County sheriff Joe Arpaio — who received a controversial pardon from Trump after he was convicted of criminal contempt for defying a judge’s orders to stop racially profiling Latino people — told Politico that he was being encouraged to run for Flake’s seat.

Senate Majority Whip John Cornyn alluded to that on Tuesday, telling reporters he is watching to see who the nominee is, according to Politico.

“They have a slight advantage when it comes to registration numbers and the electorate, so that could just be all about pulling those Trump people out,” Bergmann said of Republican chances in Arizona.

“It’s potentially more challenging — not absolutely, but potentially,” Bergmann said of Democrats’ chances. “It depends on [which Republican candidate] can emerge.”