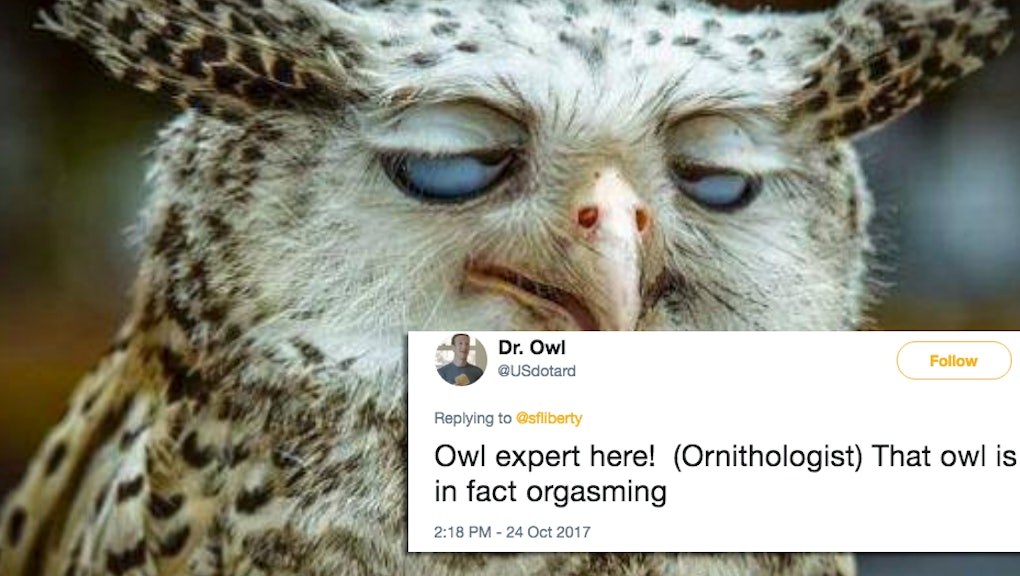 This just in: Don’t believe everything you read on the internet, kids. Especially when the subject is owl orgasms.

Tuesday, the Twitter account for the libertarian nonprofit Students for Liberty shared a variant of the “tired owl” meme in which an owl appears to be scowling or rolling its eyes in exhaustion.

“When someone praises socialism,” the meme’s text says.

That particular tweet isn’t all that notable, but it spawned a second, much more viral tweet, in which Twitter user @USdotard — who claims to be an ornithologist — responds.

“Owl expert here! (Ornithologist),” @USdotard, who changed their display name to “Dr. Owl,” said. “That owl is in fact orgasming.”

Unfortunately, that response, though funny, is not true. Aside from other major red flags, like the fact that @USdotard’s account has only been around since September and literally just changed their name to Dr. Owl, this response smelled like internet fakery from a mile away.

We emailed some real experts to confirm.

“That owl is, in fact, merely blinking,” Zoology professor Tim Birkhead of the University of Sheffield told Mic over email.

As it turns out, the thing that makes it look like the owl is experiencing a brief moment of ecstasy is simply the result of its nictitating membranes — also known as a “third eyelid” — that all birds have in order to protect their eyes from damage.

“That owl is, in fact, merely blinking,” zoology professor Tim Birkhead of the University of Sheffield told Mic over email. “And what you can see are its third eyelids (or nictitating membranes). All birds have these (Google it). It is because the owl has forward facing eyes that makes the image striking.”

Dr. Kevin McGowan from the Cornell Lab of Ornithology concurred with Birkhead, calling the assertion that the image depicted an orgasming owl “ridiculous.”

“It’s a nice joke, but it’s not true,” McGowan told Mic via email. “It’s a funny photo, though. I think [the bird is] flashing its nictitating membranes. The eyes aren’t white in any owl, and they cannot roll them. An owl’s eyes are fixed in the sockets facing straightforward.”

In fact, attempts at imbuing an owl’s face with human-like emotions are probably misguided, according to Dr. Thomas Price, an evolutionary biologist at the University of Liverpool.

“Birds don’t really communicate using their face much,” Price told Mic in an email. “It’s all about body posture and calls.” To illustrate this point, Price sent along a YouTube video of two owls mating. The whole affair lasts only about four seconds.

“You can see the male really doesn’t change expression much during sex,” Price said.

There you have it, folks.

Mic would like to extend a special thank you to the ornithologist who said that calls like ours were why he was looking forward to retirement.