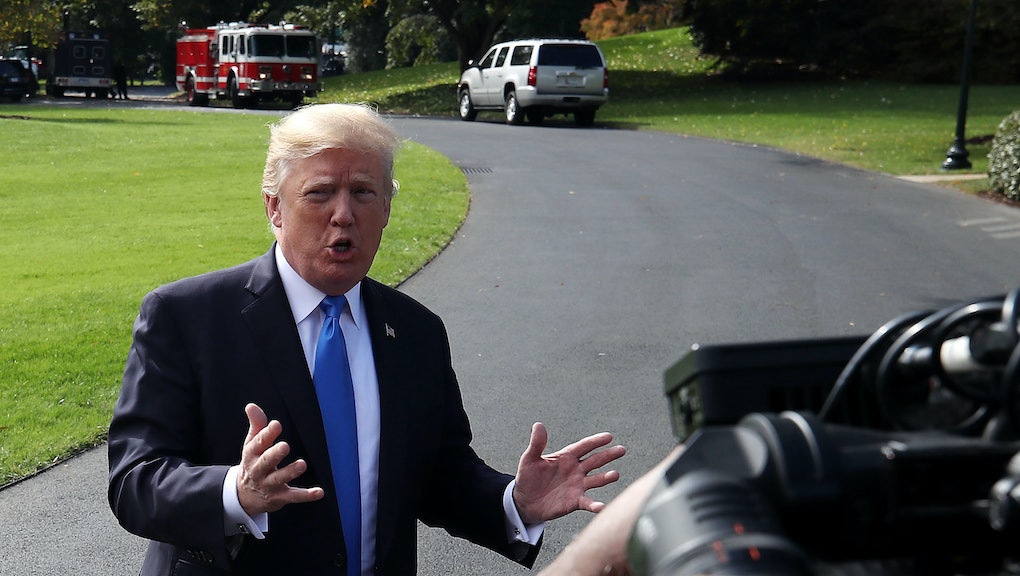 Trump to reporters: “I went to an Ivy League School ... I’m a very intelligent person.”

President Donald Trump on Wednesday blamed the media for creating a “different image of Donald Trump than the real person” in a testy exchange with reporters outside the White House.

“I think the press makes me more uncivil than I am,” Trump said. “People don’t understand. I went to an Ivy League college. I was a nice student. I did very well. I’m a very intelligent person.”

The rambling comments came as he was about to board Marine One — and a day after he engaged in a nasty public feud with Sen. Bob Corker (R-Tenn.) and was called out on the Senate floor by Sen. Jeff Flake (R-Ariz.).

Trump — who routinely slams the media as “fake news” — argued Wednesday that the press paints him unfairly, but defended himself over his attacks on Corker, Flake and others that critics have argued are unbefitting of a commander-in-chief.

Corker and Flake each said Tuesday that the president’s behavior is hurting the country — sentiments that many have said are common within the GOP but that are not discussed publicly.

Trump dismissed reports of a fractured Republican party, telling reporters Wednesday that the party has “a pretty good unity” — a “tremendous unity,” in fact.

He also attacked the media over its coverage of his condolence call with the grieving widow of a fallen soldier.

Myeshia Johnson, widow of Sgt. La David Johnson, said Monday that Trump “couldn’t remember” her husband’s name and that she felt “very upset and hurt” after the call.

Trump on Wednesday denied not remembering Johnson’s name, saying he has “one of the great memories of all time” and defending his treatment of the widow.

“It’s all about condolence,” Trump said. “Nobody has more respect than I do. Nobody.”