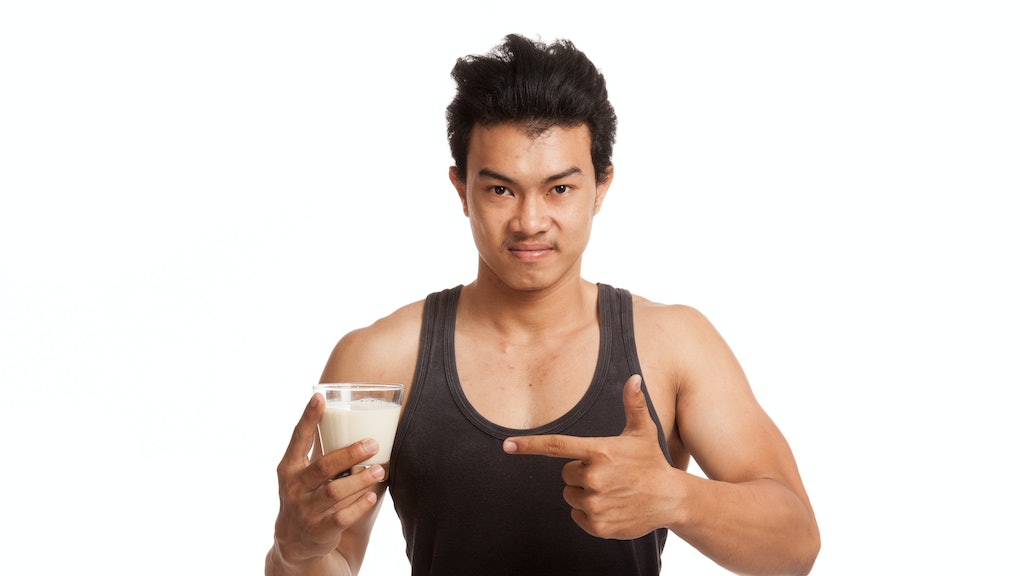 If you’re a left-leaning, liberal or even vaguely non-Nazi male-identifying person with opinions online, you’ve probably been called all sorts of too-nerdy-to-actually-be-offensive names: “cuck,” “beta,” “white knight,” “pajama boy.” The alt-right — that loosely organized collective of white nationalists and trolls — certainly has a knack for branding.

Here’s everything you need to know in a handy Q&A.

I feel dumb even asking this, but: What is a “soy boy”?

A guy who drinks a lot of soy milk. That’s literally it.

It’s based on the old urban legend that drinking soy milk will increase estrogen production in men, thus emasculating them into total beta-male losers.

Soy is also a staple of vegetarian diets (to some far-right folks, omitting meat is a beta-male choice) and, whether rightly or wrongly, it’s also culturally associated with the buying habits of consumer-conscious progressives.

…males who completely and utterly lack all necessary masculine qualities. This pathetic state is usually achieved by an over-indulgence of emasculating products and/or ideologies. …

The average soy boy is a feminist, nonathletic, has never been in a fight, will probably marry the first girl that has sex with him and likely reduces all his arguments to labeling the opposition as “Nazis.” See also: cuck, beta/omega male, orbiter, kissless virgin, male feminist.

Wow. That’s pretty stupid. How old is this phrase?

It’s hard to say for sure: The name “soy boy” is actually shared by a brand of legitimate tofu products, so you can’t really pin this specific use down with Google search trends. The Urban Dictionary definition was published in June, and the site’s activity graph for the entry shows a quick uptick of searches for the term in the months since, but pejorative Twitter mentions of “soy boy” or “soyboy” go back to 2016.

To cite my own anecdotal research, I myself was called a “soy boy” in August, though sadly only once (by all means @ me, if you feel so inclined).

Welcome to the “chanterculture,” a portmanteau of 4chan and counterculture. A lot of these abusive clowns on Twitter — especially the less serious ones — are very much into the whole “shitposting” subculture of the alt-right. As much as they make fun of lefties and anti-fascist groups for things like “virtue-signaling,” they love to cackle at “normies” who don’t comprehend their own nerd talk.

These conversations don’t just happen in a bubble. Their memes, phrases and references are often signal-boosted by higher-profile alt-right personalities and white nationalists, too — which then make their way to the mainstream (and even President Donald Trump’s Twitter).

Take James Allsup, a nationalist podcaster who attended the white supremacist rally in Charlottesville, Virginia, in August. He posted a very strange satirical video titled “HOW TO JOIN ANTIFA” to his YouTube channel in early July. It has multiple mentions of soy milk.

“This?” he says, grabbing a gallon from the display case. “This is Nazi. This is whole milk. This is bad for you, can’t drink this anymore. To be a successful antifa soldier, you have to become a soy boy.”

Allsup mockingly praises the imagined side effects of drinking soy milk, including filling you “full of estrogen,” blocking “all your testosterone” and getting “rid of your internalized misogyny and white supremacy.”

Later, Allsup jokes that “straight soy” will “give you a nice effeminate body” with “nice, good, effeminate features.”

Allsup jokes that “straight soy” will “give you a nice effeminate body” with “nice, good, effeminate features.”

Since the video is played for laughs, it’s hard to tell how seriously Allsup takes these claims, though screenshots of this 2009 Men’s Health article that appear on-screen seem intended to lend them some credibility.

Totally. That’s pretty well-established. The case referenced in Allsup’s video was an isolated incident about a man who drank nearly a gallon of soy milk a day.

Ironically, for a group so concerned with female hormones and male purity, the milk neo-Nazis are so fond of ironically chugging sure seems to have a ton of estrogen in it.

What other high-profile alt-right personalities have picked up the “soy boy” thing?

As Miles Klee points out in Mel magazine, Cernovich, “who has argued that Pizzagate and white genocide are real but date rape isn’t … routinely conflates soy with emasculation. Meanwhile, he doesn’t have the first clue about how to use a fucking grill.”

Do they actually think this is funny?

Incredibly, yes. It falls into a very particular brand of alt-right humor. Some folks who tend to find it funny are serious white nationalist true believers, and some are nihilists who just believe being as offensive, racist or misogynistic as possible is harmless, transgressive humor.

So they’re joking, but there’s some truth behind it?

Yes. Lots of the misogyny, anti-Semitism and explicit racism you see in these spaces has become increasingly unironic in recent years. A lot of these dudes feel like women, Jews, immigrants and other minorities have usurped positions and spaces where they were once powerful, and they blame this trend on progressives, feminists, Black Lives Matter — really, whoever they can.

Also, these jokes tend to winkingly acknowledge how many of these guys are, in fact, basement-dwelling virgins with abysmal social skills. It’s hard to escape the observation that many of these guys are projecting their own self-hatred and social anxieties about their individual mediocrity onto society at large.

These jokes tend to winkingly acknowledge how many of these guys are, in fact, basement-dwelling virgins with abysmal social skills.

So, in that context, the usefulness of terms like “soy boy” or “cuck” may become clearer: “It’s not my fault I live in my parents’ basement or don’t have a girlfriend or can’t find a good job,” they think. “It’s the weak-willed men who cave to the forces trying to emasculate us and separate us from the things we’re entitled to.”

One last question: If someone calls me a soy boy, how do I respond on Twitter?

Disengage, and failing that, block. No good will ever, ever come of this conversation. Your best bet for owning the troll is to simply bow out. Or at the very least, to never get mad enough online to seem triggered.