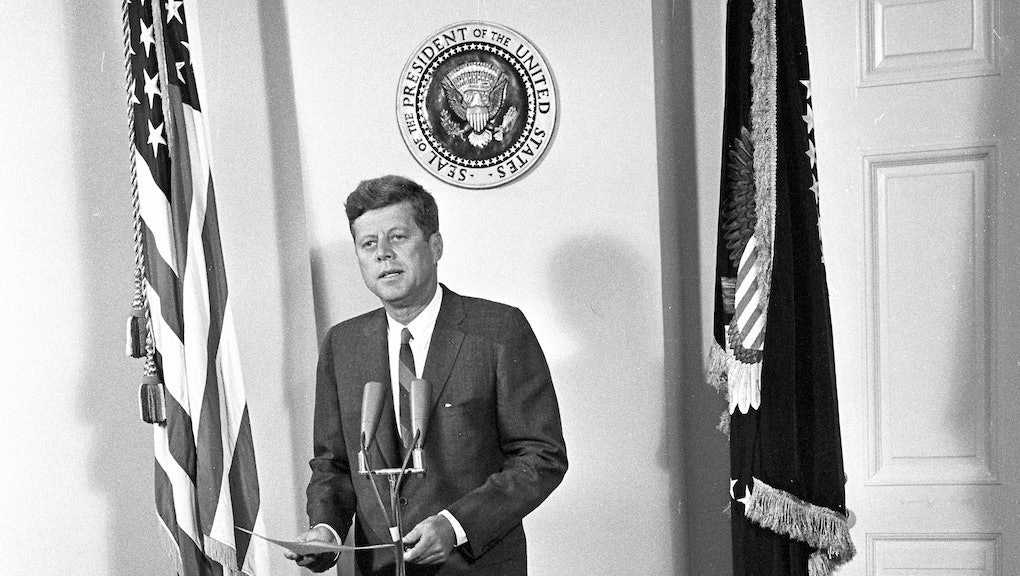 The National Archives released thousands of previously unseen documents related to the assassination of President John F. Kennedy Thursday, reigniting speculation and intrigue over the 1963 shooting.

More than 2,800 documents were released on Thursday, with more still on the way and set to be released as government agencies review any proposed redactions of information that could “harm national security, law enforcement or foreign affairs.” An additional 3,810 records had been previously released in July, the National Archives noted, and the John F. Kennedy Assassination Records Collection has amassed over 5 million pages of records since it was first established in 1992.

Here are some of the most interesting bits of information about the JFK assassination that have been released so far, including assassination plots, conspiracy theories and more.

According to one memo, which the Telegraph noted was first released in July but previously went unreported, a British newspaper, the Cambridge News, got a tip about “some big news” minutes before it happened.

The memo, which was sent to the FBI director from deputy director James Angleton, said an anonymous caller had contacted a Cambridge News reporter at 6:05 p.m. GMT on Nov. 22, 1963, the day JFK was shot.

“The caller said only that the Cambridge News reporter should call the American Embassy in London for some big news and then hung up,” the memo reads. “The important point is that the call was made, according to MI-5 calculations, about 25 minutes before the president was shot.”

Kennedy’s successor, Lyndon B. Johnson, was included in several of the documents, along with his own theories about the assassination — and a theory about him.

In one document from 1975 detailing the testimony of Richard Helms, the former CIA director said Johnson believed his predecessor’s death was linked to the death of South Vietnamese President Ngo Dinh Diem.

“President Johnson used to go around saying that the reason President Kennedy was assassinated was that he had assassinated President Diem and this was just justice,” Helms said in the document. “He certainly used to say that in the early days of his presidency and where he got this idea from I don’t know.”

Another document from FBI head J. Edgar Hoover on the Soviet Union’s response to the assassination, meanwhile, speculated that the Russians believed Johnson himself could be behind the killing. The Soviets, who said news of Kennedy’s death was “greeted by great shock and consternation” in the Soviet Union, reportedly suspected that the assassination “arose out of a carefully planned campaign in which several people played a part.”

Noting that a source had received instructions from KGB headquarters “to develop all possible information concerning [Johnson’s] character, background, personal friends, family and from which quarters he derives his support in his position as president,” the memo explained that the KGB “was in possession of data purporting to indicate President Johnson was responsible for the assassination of the late President John F. Kennedy.”

Another allegation against Johnson was published in a 1964 memo, which stated that the Ku Klux Klan had “documented proof” that the former president was a member of the racist organization in Texas “during the early days of his political career.”

Many of the documents released on Thursday related to the U.S.’ tensions with Cuba both before and after Kennedy’s assassination. According to one memo, the Cuban government’s initial reaction to the president’s death was one “of happy delight.”

The U.S. government had been devising plots to assassinate the island’s leader, Fidel Castro, in the years before Kennedy’s assassination, the documents released Thursday revealed. Potential assassination plots included such ideas as hiring a mafia gunman; presenting Castro with a skin-diving suit contaminated with tuberculosis and a fungus producing madera foot; luring Castro with a “booby-trap spectacular seashell” in an area in which he enjoyed diving; and using a ballpoint pen armed with a hypodermic needle.

The U.S. government was also interested in enlisting Cubans to help them with their plot. One document lays out Operation BOUNTY, a plan that would provide financial rewards to Cubans for “killing or delivering alive known Communists” in hopes of overthrowing the country’s regime. The CIA planned to alert Cubans to the plan by dropping flyers on Cuba from the air. While financial rewards would include $100,000 for government officials and $57,500 for department heads, though, the prize for capturing or killing Castro was much lower: only two cents.

Cuba was not thought to be behind Kennedy’s assassination, however. A staff report released Thursday from the House Select Committee on Assassinations noted that such an act was an unlikely, writing: “The Committee does not believe Castro would have assassinated President Kennedy, because such an act, if discovered, would have afforded the United States the excuse to destroy Cuba. The risk would not have been worth it.”

The documents also mention Lee Harvey Oswald’s ties to Cuba and the Fair Play for Cuba Committee. One document noted that the assassin had made a call to the Cuban Embassy in Mexico City, which was reportedly about getting a visa. In another memo, a conversation was recounted in which a Cuban security official remarked that Oswald must have been a “good shot.” In response, a Cuban intelligence officer remarked that he knew Oswald was, because he knew the killer.

Lee Harvey Oswald was being investigated prior to the assassination

Thursday’s released documents also reveal a number of other details about Kennedy’s killer.

Oswald was already known to the U.S. government before the assassination; one memo from October 1963, one month before Kennedy was shot, detailed the FBI’s attempts to locate Oswald in Dallas and noted the later-assassin was “the subject of a separate investigation.”

In addition to Oswald’s intercepted call to the Cuban embassy, the FBI also noted that he visited the Soviet embassy in September 1963 and spoke with Valeriy Vladimirovich Kostikov, a known KGB officer. On Oct. 1, Oswald called the Soviet embassy and reportedly asked in “broken Russian” if there was “anything new concerning the telegram to Washington.” It is expected that these interactions concerned passport or visa matters, the memo noted.

The Soviets, meanwhile, called Oswald a “neurotic manic who was disloyal to his own country and everything else” in their response to the assassination and claimed the assassin “had no connection whatsoever with the Soviet Union.”

After Oswald assassinated Kennedy, the killer was taken into custody before being shot in front of news cameras by Jack Ruby on Nov. 24. One document, however, noted that the FBI was informed of a threat against Oswald the night before he was killed. Hoover recounted that the agency’s Dallas office received a call “from a man talking in a calm voice and saying he was a member of a committee organized to kill Oswald.”

Ruby, the document noted, denied having made the telephone call, and said he acted without any associates. Oswald’s killer, who ran two nightclubs and was rumored to be involved with “underworld activity” in Chicago, told authorities that he “guessed his grief over the killing of the president made him insane,” the memo said.

Conspiracy theories continue to swirl about Kennedy’s assassination and who was behind it — and according to the same document as the death threat, the speculation began early. Hoover said in the memo, which was released immediately after Oswald’s death on Nov. 24, 1963, that “the thing I am concerned about ... is having something issued so we can convince the public that Oswald is the real assassin.”

However, Thursday’s documents will ensure that the conspiracy theories continue to swirl. In Helms’s 1975 deposition, the former CIA director was specifically asked if there was “any information involved with the assassination of President Kennedy which in any way [shows] that Lee Harvey Oswald was in some way a CIA agent” — and the publicly available version of the document cuts off before his response.