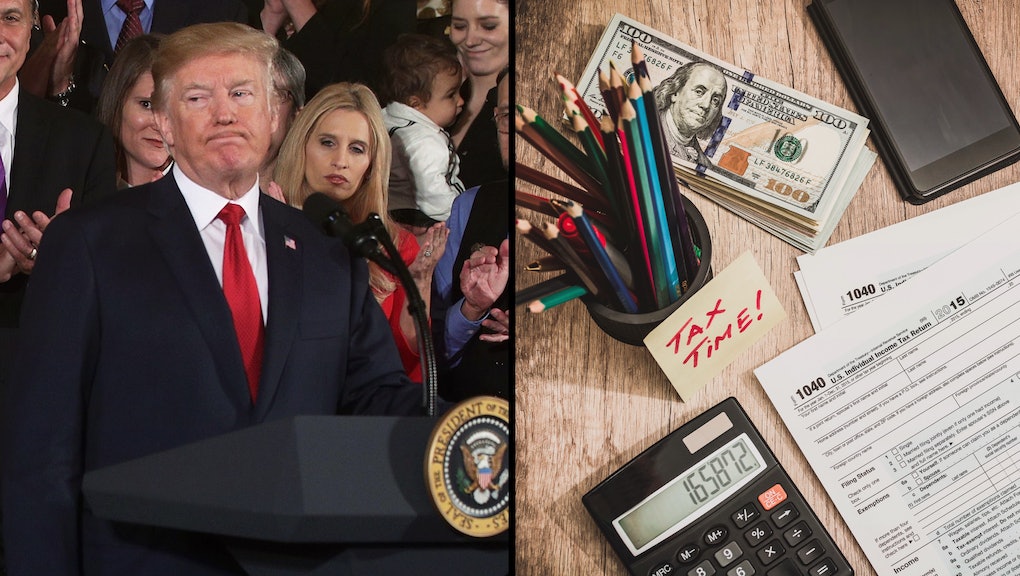 Trump tax reform 2017: Will the plan affect you? 5 things to know about tax cuts & the middle class

Congress seems eager to make sure you get a tax break in 2018, but the process is already proving to be tumultuous: There’s a lot more than “reduced taxes” on the table. Congressional Republicans — with President Donald Trump’s support — say they seek to go beyond simple cuts and actually reform the U.S. tax code by closing loopholes and limiting tax breaks and deductions, among other changes.

We won’t know exactly what’s in the bill until Republican members of the House of Representatives unveil a draft Wednesday, according to an announcement from the Ways and Means Committee, which handles tax policy. Most of what we know about the proposal is based on a framework released in September.

But last Thursday, the House cleared its first major hurdle by passing a budget reconciliation measure that would allow Republicans to approve a tax bill without any Democratic support — so long as it doesn’t increase the federal deficit by more than $1.5 trillion. They still have far to go on the budget deficit front: The Tax Policy Center estimates the promised reforms would cost at least twice that over the next 20 years.

“You can’t tell what it portends because none of the details are there,” said Michael Graetz, alumni professor of tax law at Columbia Law School and former deputy assistant secretary for tax policy under President George H. W. Bush. “A middle-class tax cut depends on where the brackets and new rates cut in, and they tell us very little about that.”

Tensions are high: Even before news broke Monday of the indictment of Paul Manafort, Trump’s former campaign chairman, tax reform was going to be just as complicated as the Republican Party’s attempts at health care reform — with several Democrats vocally opposed to tax breaks for the rich. The Manafort probe is also likely to pose a distraction for Trump, tax reform’s most important salesman, writes Politico’s Ben White. On Tuesday morning, Trump said in a tweet he wants people to “focus on our massive tax cuts for business (jobs) and the middle class.”

What do we know for sure about the tax plan? Here are the key reforms currently being discussed — and how they would likely affect your tax bill.

1. Your 401(k) contribution limit could change

One of the bigger controversies surrounding tax reform is whether the amount of allowable pre-tax contributions to your 401(k) should be reduced. Right now, 401(k) contributions lower your taxable income — and let you sock away tax-deferred retirement savings — up to $18,500 annually.

The beneficiaries of this tax perk tend to be disproportionately wealthy, but advocates of keeping the benefit limit high say it’s an important incentive to nudge Americans of all income levels to stash away cash for retirement.

Now, it’s still unclear what would happen to your 401(k) under Republican-led tax reform. Trump himself said in a recent tweet that any changes to the tax code wouldn’t impact 401(k) plans, but House Ways and Means Committee chairman Kevin Brady contradicted that promise two days later, saying the legislation “could still include changes to the way many Americans save for retirement,” according to Business Insider.

Brady backtracked yet again Friday, telling CNBC the bill may end up raising the limit of tax-free 401(k) contributions to $20,000 per year.

2. Your state and local taxes could go up — depending on where you live

Another problem for legislators is payment of state and local taxes, which is one of the biggest federal deductions people take, according to Tax Foundation senior analyst Scott Greenberg.

“The biggest [deduction] that people claim is the state and local deduction, so a bill that’s interested in eliminating deductions is going to take a hard look at that provision,” Greenberg said. “Everyone in the GOP caucus wants a bill to pass, but the tax code is a complicated difficult document to change and there are a lot of potential controversies and disagreements.”

Case in point: Blue-state Republicans from New York and New Jersey were largely opposed to the House budget resolution because it called for axing deductions on state and local taxes. In New York, for example, Gov. Andrew Cuomo estimated that 3.3 million taxpayers in the state would see their federal income tax liability increase by an average of $5,300. In California, more than 6 million residents deduct $112.5 billion in state and local taxes each year, according to the Mercury News.

“You’ve got a number of substantial reductions in revenue, the top rate coming down, the end of the estate tax,” said Robert Barbera, co-director of the Center for Financial Economics at Johns Hopkins University. “And you have a very short list of meaningful deductions that are being proposed.”

It’s unclear whether the GOP will be able to surmount these controversies in the time allotted, Graetz added. “The rush, the effort to do a broad tax bill of the sort they’re talking about in six or seven weeks of legislative action is unprecedented,” he said. “It took 53 weeks to get the 1986 legislation through. In 1985, Reagan had nearly 500 pages of proposals. [Trump has] nine pages, about a third of which were blank.”

3. The tax benefits of buying a home could change

The mortgage interest deduction, which allows you to deduct the interest paid on any loans you’ve taken to build, buy or renovate your home, is another big question mark for tax reform. It’s an incentive for homeownership, but it can sometimes be applied to second homes and vacation properties, as well as homeowner-occupied residences.

The push for tax reform has already lost an important backer over proposed tweaks to the mortgage interest deduction: the National Association of Home Builders. After discussions with House Republicans went south, CEO Jerry Howard told Politico that “all the resources we were going to put into supporting are now going to go into opposing the plan.”

Realtors and homebuilders are concerned because the GOP proposal would roughly double the standard deduction, effectively making the mortgage interest deduction a lot less attractive.

To make up for the shortfall, the real estate industry wanted Republicans to back a proposal that would have created a new tax credit that “would combine mortgage interest and local property taxes,” according to Politico. Unlike deductions, which lower the amount of your taxable income, tax credits lower your income tax liability dollar-for-dollar.

4. It’s not too late to create bigger breaks for the middle class...

Besides leaving these popular tax deductions untouched, the easiest way to help middle-class Americans, Johns Hopkins’ Barbera said, would probably be to reduce payroll taxes for workers who fall below a certain income threshold. Payroll taxes are technically split between employers and employees, but a Tax Foundation analysis found that virtually all payroll taxes are effectively passed on to workers via lower wages.

“You could do [middle-class tax reform] in a fashion that would help the bottom 50%, but you would have to do it in the context of not helping the 1%,” Barbera said. “If I wanted to give you a dollar, I’d give you a dollar. So if I’m trying to help Ma and Pa, cut the payroll tax in half. They all pay Social Security.”

Elaine Maag, senior research associate at the Urban-Brookings Tax Policy Center, said another way to structure tax reform would help the middle class make up for lost ground on wages: “If you want to use tax policy to influence behavior or solve problems, then the first thing you would [ask] is, ‘What problem do we face today?,’” Maag said. “A lot of economists would say that there is a problem with stagnant wages. But there’s no enhancement to the [earned income tax credit], so they’re missing out on an opportunity to help low- and middle-income families.”

There’s already some evidence the bill might move in a more populist direction: At one point, Speaker of the House Paul Ryan said Congress was considering adding a new fourth — highest — tax bracket for the nation’s top earners. And others have questioned whether the wealthiest Americans need a tax cut at all, according to a Politico report.

5. ...but taxes could actually end up even higher

Republicans are trying to sell their tax proposal by saying it would help put money back in the pockets of average Americans. Earlier in October, the Treasury Department published a white paper suggesting that “reducing the statutory federal corporate tax rate from 35% to 20% would ... increase average household income in the United States by, very conservatively, $4,000 annually.” Trump himself has touted the figure in speeches to blue-collar workers, according to a Washington Post report.

But several top economists are skeptical of that figure, not least because the last time Congress moved to cut corporate taxes, wages for the rank and file actually fell.

“It’s an estimate that, frankly, should be and has been rejected out of hand by most serious people,” said Jacob Leibenluft, a senior adviser at the Center on Budget and Policy Priorities who served as the economic policy director on former President Barack Obama’s 2012 campaign. “They’re not saying you’re paying less in taxes or you get a tax cut; they’re making the case that if we give a large tax cut to corporations, that will trickle down to workers.”

And the White House’s projected increase in household income might misleadingly high, said Maag. “The average federal change [to your taxes] would be a reduction of $1,500 in 2018,” she said. And “the differences between income quintiles is stark ... The lowest 20% of the distribution is going to [see] a decrease of $60, and families in the top quintile would see closer to a reduction of $8,500.”

Finally, some workers in all income groups could even see their tax bills go up, according to the Tax Policy Center’s analysis: By 2027, the report found, about one-quarter of taxpayers would actually pay more than they do now — including nearly 30% of filers making between $50,000 and $150,000 a year.