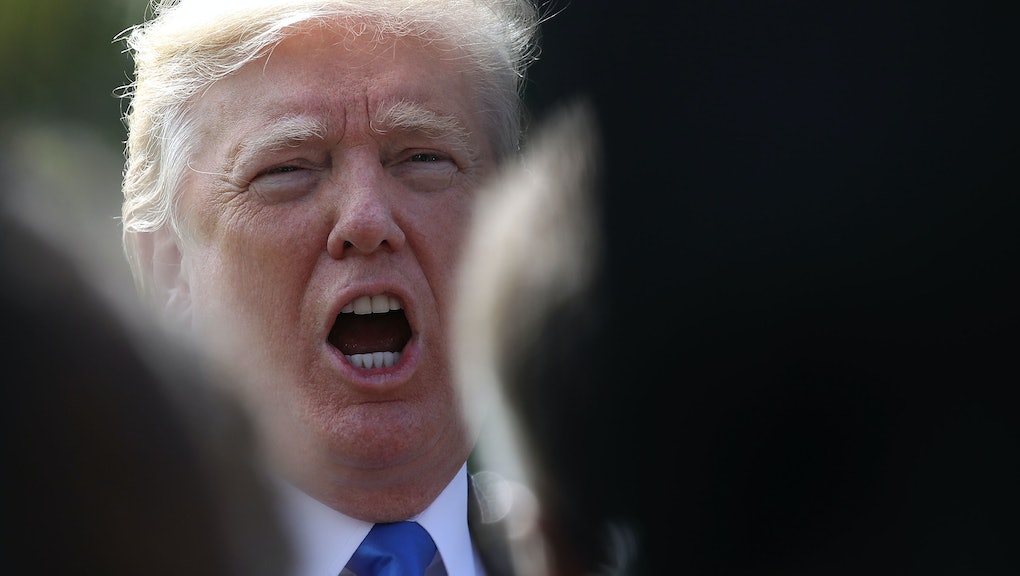 With the first arrest in Robert Mueller’s investigation into the Trump campaign’s Russian ties potentially just a day away, President Donald Trump took to Twitter Sunday morning to decry the ongoing probe in a seeming attempt to put the focus back on Hillary Clinton.

“Never seen such Republican ANGER & UNITY as I have concerning the lack of investigation on Clinton made Fake Dossier (now $12,000,000?),” Trump tweeted Sunday, later adding, “the Uranium to Russia deal, the 33,000 plus deleted Emails, the Comey fix and so much more.

“Instead they look at phony Trump/Russia ‘collusion,’ which doesn’t exist,” Trump continued to tweet. “The Dems are using this terrible (and bad for the country) Witch Hunt for evil politics, but the R’s are now fighting back like never before. There is so much GUILT by Democrats/Clinton, and now the facts are pouring out. DO SOMETHING!”

Trump and other Republicans’ apparent attempts to put the emphasis back on Hillary Clinton, who is now a private citizen with no political power, comes in the wake of a CNN report that a grand jury has approved charges in Mueller’s Russia investigation and an arrest is imminent.

The president has frequently decried the charges of collusion between his campaign and Russia as a fake “witch hunt,” though investigators maintain it’s too soon to tell either way. When asked about Trump’s recent assertion that it is “commonly agreed” that there was no collusion between the Trump campaign and Russia on CNN Sunday, Sen. Angus King (I-Maine), who serves on the Senate Intelligence Committee, said that wasn’t true.

“It’s certainly not commonly agreed in our committee, and we’re the ones that are doing the investigation,” King said Sunday. “I don’t think there’s any basis for that statement.”

Trump and Republicans’ claims about Clinton and the Democrats are similarly unfounded. Though Republicans in Congress recently launched two investigations into Clinton’s private email server and the Uranium One deal, there’s little evidence that points to impropriety on her part.

The Uranium One “scandal,” which posits that Hillary Clinton, as secretary of state, approved a deal for Russians to purchase a stake in Uranium One in exchange for Clinton Foundation donations and a high speaking fee for Bill Clinton, has been largely debunked. Though Clinton was one of nine members on the Committee on Foreign Investments in the United States, which was part of the deal’s approval process, the Washington Post noted that it was the Treasury Department that took the lead on the committee and Clinton reportedly did not play a role in the committee’s decision. The uranium deal also required additional federal approvals unrelated to Clinton, and the Post noted that only the president had the power to completely block or suspend the deal.

Trump’s claim that “Clinton made [the] fake dossier” is also largely untrue. Though the dossier’s most salacious claims are still unverified, several findings in the dossier have been confirmed, making the document not quite as “fake” as Trump claims.

The president’s $12 million figure that Clinton allegedly paid is also exaggerated. According to the New York Times, Clinton and the DNC paid $12.4 million to law firm Perkins Coie during the 2016 election, whose lawyer Marc Elias then contracted Fusion GPS. The actual amount paid to Fusion GPS is currently unclear, according to the Hill.

While Trump added on Twitter that the newest Russia revelations were a way to distract from the Republican’s push on tax reform, opponents of the president believe that it’s his renewed focus on Clinton that’s the real distraction.

“It’s the same baloney they’ve been peddling for years, and there’s been no credible evidence by anyone,” Clinton herself said about the new charges against her during an interview on C-SPAN. “In fact, it’s been debunked repeatedly and will continue to be debunked.

“Trump and his allies, including Fox News, are really experts at distraction and diversion. So the closer the investigation about real Russian ties between Trump associates and real Russians ... the more they just want to throw mud on the wall, and I’m their favorite target,” Clinton added.

“I’m not surprised, but I think the real story is about how nervous they are about these continuing investigations.”