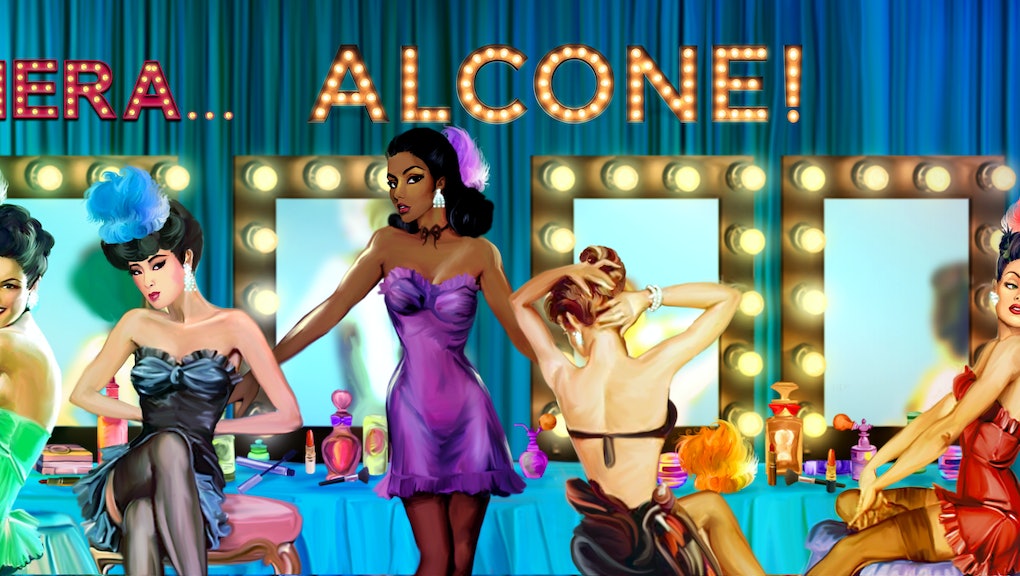 From eyelashing showgirls to fake blood in horror films, the 65-year history of Alcone

Given that the makeup industry is constantly changing and constantly innovating, any makeup company that can sustain itself for more than, say, 10 years is impressive. These days especially, there’s so much competition and options for consumers when it comes to beauty.

So when you consider that the family-owned Alcone Company has been around for 65 years, you can’t help but be impressed. The company and makeup distributor was founded in 1952 and its history is twisted and entirely riveting given that it’s been able to augment its specialties with the changing times.

In honor of its 65th anniversary, Mic spoke to its current CEO, Maria Stewart, who’s a member of the Mallardi family that bought Alcone in 1982 and still owns it to this day, to learn more about the company and its remarkable resilience.

How it all began

You have a couple named Al and Harriet Cohen to thank for Alcone. In 1952, Al set up the Alcone Company, which comes from a mixture of Al’s first and last names, in the back of his parents’ pharmacy in downtown New York City. From the very beginning, he focused on selling the cosmetics that showgirls and starlets would need, like false eyelashes and professional, long-lasting theatrical makeup.

“His parents had a pharmacy and saw a niche for makeup for showgirls in the city,” Stewart explained in an interview with Mic. “In 1952 at this point, theater was a strong presence in the entertainment industry, and that was his niche. Seeing that these performers didn’t have a place to go pick up makeup in the city, he provided that place for them.”

With Alcone selling Max Factor makeup, the brand heavily favored in Hollywood at the time because of its quality, showgirls and showrunners were among the first patrons.

Broadway producers and artists flocked to Alcone in the ’50s. The boom of TV and film in the 1960s and 1970s brought in professional makeup artists from film and TV projects as well. That’s how the company started to become associated with makeup artists who create special effects and horror movie makeup.

By the time that Stewart’s family bought Alcone in 1982 as a compliment to the Mallardi family’s theatrical hardware store, Alcone had already had a hand in plenty of horror films’ special effects makeup.

“Special effects is a very big part of our customer base,” Stewart said. “A lot of makeup companies focus on the beauty of makeup, but Alcone has more so focused on highly detailed makeup. There are scenes, for example, when you need a blood effect and a bruise. It has to look really realistic and has to be done quickly. Sometimes the effect has to be done right in front of the camera. That type of art that is very specialized is something that we’ve always invested in.”

In other words, Alcone’s core customers, since it began, have been professional makeup artists looking to use makeup in a highly skilled manner. If you were to browse its website or its store in New York City, it’d basically be like going to a Sephora in which every product is certifiably high-quality and professional-grade.

“These are professionals,” Stewart said. “They can’t use something from a drugstore. We’ve really been able to hold on to that market. There have been a lot of makeup lines that come in, but if you don’t have options and you’re pigeonholed with one makeup line, you can’t put on a Broadway production. We have the options and the quality of makeup they need.”

And horror movies definitely need this type of high-grade makeup. As Stewart told us, the Academy Award-winning makeup artist Dick Smith, who worked on films like The Exorcist, The Godfather, House on Haunted Hill and more, was a longtime friend of her family’s, and Alcone before her family owned it too.

“When it was time to put the Regan head, that was in The Exorcist and spun around, in the Museum of the Moving Image, [my brother and sister] had to go up to Connecticut to pick up the head and drop it off at the museum,” Stewart said.

So we guess it’s safe to say you’ve got Alcone products to thank for scaring the sh*t out of you at least once.

As for why Alcone has been so beloved by makeup artists in need of special effects makeup, Stewart thinks it’s both about the quality of makeup and Alcone’s expertise and services.

“I think that in the beginning, it really was difficult to obtain these products,” Stewart said. “There’s a lot of knowledge that goes behind selling these products. A lot of them require ovens and formulas. And you have to make sure you use all the safety precautions. For us, being a professionally-based company, we were able to provide these products to students looking to find out how to use them, but also if they had questions, we had the answers for them. Before the internet, we were that encyclopedia of knowledge for the special effects world.”

“Before the internet, we were that encyclopedia of knowledge for the special effects world.”

That’s likely what led to Alcone working with the Blue Man Group. In the late ‘80s, the members of the Blue Man Group asked Alcone to help them find a blue makeup that was safe, long-lasting and exactly the right shade.

“When my brother and sister met with them, they told them they had this idea that involved drums, blue makeup and catching things in their mouths,” Stewart said. “My brother and sister were intrigued, so they were helping them find anything that had a blue undertone to it, then basically gave them as much as they could find because they thought it was such an interesting concept. They came to them for help, and to this day my brother oversees the makeup they wear and see that it’s up to quality and the exact color they need.”

That kind of story, with an artist coming to Alcone with an idea, is something that Stewart considers of deep importance to the company.

“It’s such a common story for us. They need help. They don’t have a budget,” Stewart said. “As a family, we are obsessed with production, films, TV and continuity and we love what goes on behind the scenes. We love being a part of people coming up with an idea and bringing it to life. We’ll never turn away someone who wants to be creative. If we have stuff that we can donate, we donate it. You can only really get that with a family business, because it’s up to us to decide to what extend we can to assist an artist.”

“We love being a part of people coming up with an idea and bringing it to life. We’ll never turn away someone who wants to be creative.”

In addition to the Blue Man Group, Alcone has been called upon to assist countless modern Broadway shows, like The Lion King in 1997.

And that’s where Alcone finds itself now. It still has a store in New York City where artists — like Cindy Sherman, who’s a known Alcone fan — and makeup obsessives alike come in looking for products that are quality and professional-grade.

It’s always been far more about the product than the packaging for Alcone, which just started to create its own brand of products.

“I’ve seen more of a demand for these professional products than what you would buy in your local mall or department store over the years,” Stewart said. “People started to pay attention and say, ‘Maybe I don’t need nice packaging. Maybe I need a good product.’ It’s consumers who say, ‘Hey I’d rather have this foundation that looks good on my face and not so good on my vanity, because I just want a good product.’”

With 65 years in this industry, Alcone remains passionate about not only offering artists and makeup fanatics the kinds of products they need — and want — but also providing a safe space for someone to ask questions.

“I hope we continue to be able to provide to the artists and the everyday consumer everything and anything they want to have,” Stewart said. “The legacy I’d like to continue is that Alcone is always a safe place to go, where you can get the products you need and you can feel safe with us. You can know that you’re getting something that is going to help you be the better and happier artist and better and happier person, whether it’s for a theater production or covering a scar or transforming yourself into who they want to be.”

After all, isn’t that the real beauty of makeup?