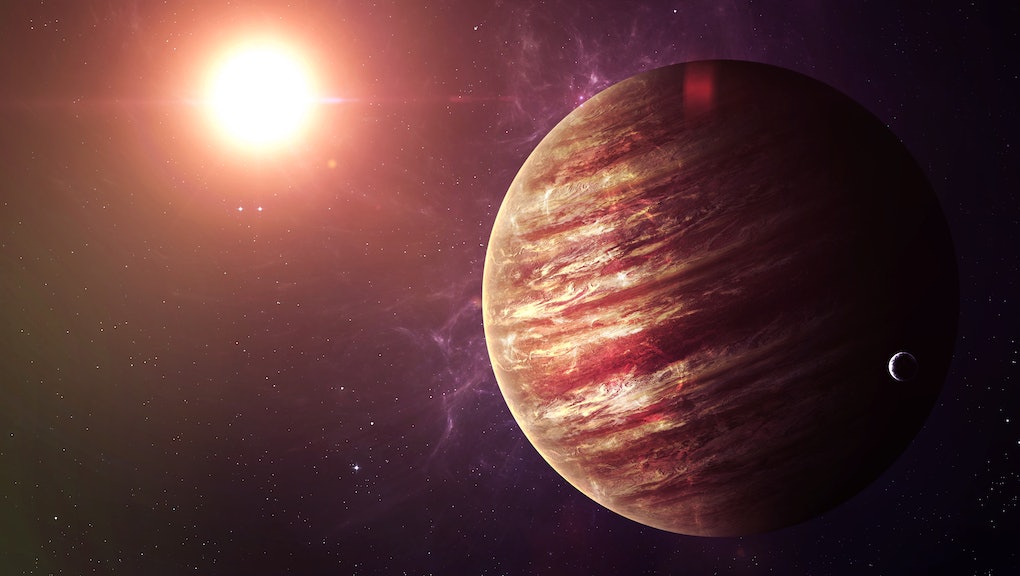 Around 1,730 light-years away, a Jupiter-like planet with a daytime temperature of 5,000 degrees Fahrenheit is experiencing a snowfall unlike anything you’ve ever seen. Instead of frozen water, snow on the planet Kepler-13Ab takes the form of titanium dioxide, the active ingredient in most sunscreens.

To spot Kepler-13Ab, researchers at Penn State University used the Hubble Space Telescope. As it passed behind its sun, they were able to measure information about Kepler-13Ab — including that its atmosphere grew colder in higher altitudes, which stood out as unusual in comparison to other “hot Jupiters.”

Unfortunately, all that sunscreen snow isn’t likely to be helpful in your daily skincare regimen — and not just because it’s nearly 2,000 light-years farther than your nearest Sephora. Kepler-13Ab’s strange temperature pattern indicated to researchers that its daylight side doesn’t contain any of the titanium dioxide. Normally, titanium dioxide in a hot Jupiter’s atmosphere traps and reflects heat, causing temperatures to increase as you go higher in altitude. In other words, that sunscreen snow only exists on the portion of Kepler-13Ab that faces away from its sun, according to the study.

The presence of titanium dioxide on a planet like this wasn’t unexpected, but it tends to hang around in a gaseous form in the upper atmosphere. However, because of Kepler-13Ab’s incredibly strong gravitational pull — “six times greater than Jupiter’s,” according to Penn State’s news release — the titanium dioxide is pulled downward, trapping it in the planet’s lower atmosphere.

“Presumably, this precipitation process is happening on most of the observed hot Jupiters, but those gas giants all have lower surface gravities than Kepler-13Ab,” Thomas Beatty, the study’s lead author, said in the news release. “The titanium oxide snow doesn’t fall far enough in those atmospheres, and then it gets swept back to the hotter dayside, revaporizes, and returns to a gaseous state.”

Jason Wright, another of the study’s authors, said the data about Kepler-13Ab’s atmosphere would help astronomers understand the atmospheric behavior of other planets in the future.

“Understanding what sets the climates of other worlds has been one of the big puzzles of the last decade,” Wright said in the news release. “Seeing this ... process in action provides us with a long sought and important piece of that puzzle.”