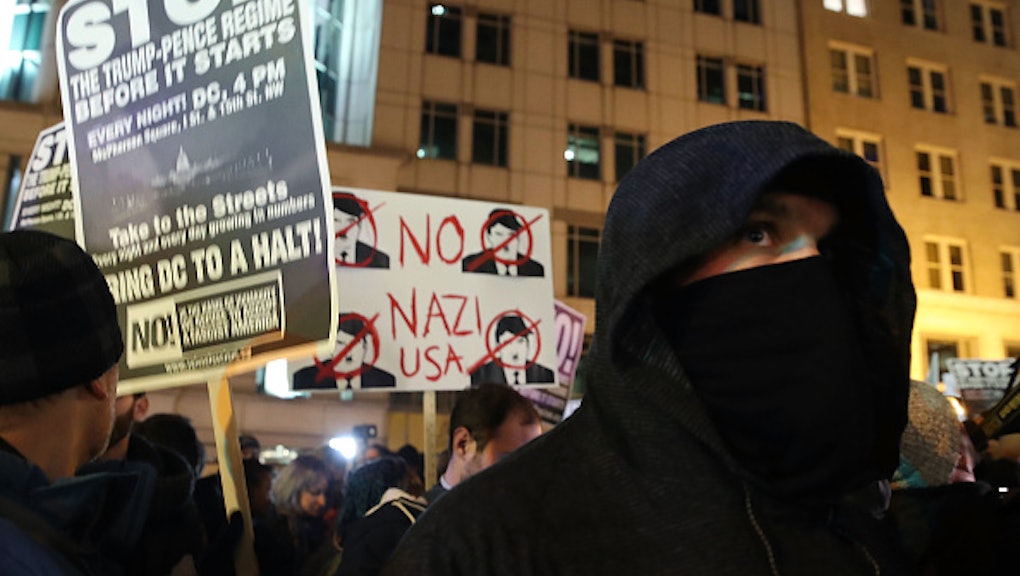 The far-right thinks a violent antifa overthrow is coming Nov. 4, but the truth is far stranger

“The nightmare must end,” the full-page ad in the New York Times announced on Wednesday in bold, block letters. It called on thousands of people to take to the streets. “Nov 4. It Begins.”

Less than one year ago, as protesters flooded Washington, D.C., for President Donald Trump’s inauguration, Refuse Fascism materialized, seemingly out of nowhere, brandishing their now-iconic black and white “NO!” posters. Since then, the anti-fascist organization has become a mysterious yet omnipresent force throughout the past year’s wave of protests. As demonstrators have continued to spill into the streets with anti-Trump resentment, Refuse Fascism frequently emerges with signs, shirts, pins, and orators primed with a megaphone.

This has all led up to the group’s plans for Nov. 4, which have become shrouded in misinformation. This Saturday, Refuse Fascism will kick off its loftiest project yet: mass demonstrations in the streets — every day until Trump and Vice President Mike Pence are out of office.

The group partially operates out of a little bookshop on 132nd Street in Harlem, staffed by volunteers and stocked with dissident literature, T-shirts with their iconic “NO!” emblazoned on them. It even has a cozy corner for children’s books in back. It is from here, it’s been said by the fringe right, that antifa will launch its white genocide and bring about the next Civil War.

Sunsara Taylor, a wiry, dark-eyed communist firebrand, showed me through Revolution Books on Friday, briefly mentioning the hate and abuse that bookstore workers and members of Refuse Fascism have seen in the past weeks. She used to volunteer there herself, she says, but now she’s more focused on her organizing. She pays little mind to the death threats and hateful voicemails, as her energy is focused on planning for the big day, Nov. 4, she hopes will be the beginning of the end of the Trump regime.

For the far-right, Refuse Fascism’s planned demonstrations aren’t viewed as merely another series of anti-Trump street rallies, but the start of an awaited Civil War against Constitution-loving patriots, an uprising of “millions of antifa super soldiers” preparing a slaughter of white Americans.

For prominent thinkers and activists on the socialist left who spoke to Mic on background, and many reporters, scholars and activists over the past decade, Refuse Fascism is seen as nothing but a diversion, the latest front group for a scientology-like communistic cult of personality.

So, what’s the truth behind Refuse Fascism’s sudden rise to prominence in the current protest zeitgeist? For the answer, we have to ask something else entirely: Who the hell is Bob Avakian?

A brief history of “Chairman” Bob

Ten years ago, another full-page advertisement in the New York Times declared that “Dangerous times demand courageous voices.” It was cosigned by prominent leftist activists like Cornell West and Cindy Sheehan; Slavoj Žižek later signed an online version. And who was this necessary voice? Bob Avakian.

“Chairman” Bob Avakian is a ‘60s-era radical who, in 1975, founded the Revolutionary Communist Party, also known as RCP or RevCom — a small group of Maoists that’s managed to survive for decades by embedding, some say parasitically, within nearly every major protest movement of the past 40 years, from the L.A. race riots to the anti-war movement of the Bush years. The RCP is often referred to as a communist doomsday cult that is obsessed with Avakian, its mysterious leader, and hastens unto a final emancipation of humanity through a populist revolution.

Avakian teaches his devotees a political system he calls the “new synthesis” of communism, a winding philosophy that claims a holistic “scientific” analysis of every failed communist revolution before it. Revolution Books, with stores in NYC and Berkeley, California, are the hubs for the RCP, where some of the most prominent real estate in the shop is dedicated to Avakian’s work.

Avakian’s acolytes come from an impressive roster of movement leaders, like criminal justice activist Carl Dix, and famed flag-burner Joey Johnson. But Avakian has mostly been in hiding since the ‘80s, appearing every few years to give an exhaustive lecture at churches or local performance spaces across the country. Journalists looking to interview him have fought for years to seek an audience, and failed.

But while Avakian remains hidden, RCP’s members have uprooted their lives in service of the revolution by chasing populist outrage wherever it arises. In 1992, RCP members moved en masse to Los Angeles in the wake of the race riots, putting a “Wanted” ad in its own weekly paper for revolutionaries willing to join the fight.

“If in the flames of the L.A. rebellion, you saw the first light of a whole new world, then this call is to you,” the paper declared. “You should be in L.A.! And you should get down with, work with, live and fight the powers-that-be together with the Revolutionary Communist Youth Brigade this summer.”

Avakian and his followers call this type of overt infiltration “hastening while awaiting.” In Avakian’s so-called new synthesis, a communist revolution will come when civilization reaches a sufficient crisis. Like any prophet, Avakian cannot say when that day will come, only that it is nigh. In the meantime, revolutionaries “must be tribunes of the people who can seize on every major event.”

The latest of these inflection points, his followers believe, was the election of Trump.

On Dec. 19, Taylor, who launched a movement to end pornography during the Obama administration, took to the stage at Cooper Union in New York with Dix and allies of the RCP for an emergency organizing meeting, where they announced Refuse Fascism as their latest project.

“We called on them, we said, ‘Even if you’ve never done it before, become an organizer,’” Taylor said. “A hand of people can become a catalyst for many more. So many people have it in their bones, but don’t know what to do.”

In the following months, Refuse Fascism generated new leaflets, posters and signs, encouraging the newly minted activists in the crowd to post them up in cafes and in public transportation. They took out another advertisement, this time in the Washington Post.

And suddenly, they were everywhere. They marched at the #J20 protests on Inauguration Day, where an unrelated anti-fascist black bloc broke windows and burned a limousine. They had contingents at January’s airport protests against the so-called Muslim Ban, the Impeachment March in July, at this summer’s anti-racist protests in Charlottesville and at the protests against the far-right “Free Speech Week” in Berkeley. In many cases, they arrived with pamphlets and packets filled with the good word of Chairman Bob.

Prominent leftists, socialists and anarchists who spoke to Mic on background said that Refuse Fascism is just another front group in a long line of attempts by the RCP to stay relevant.

In 2014, when the RCP quickly appeared in Ferguson, Missouri, the group was one among many criticized in the media for “hijacking” the protests. In 2015, #BrooklynProtest organizers demonstrating to mourn the police killing of Kimani Gray physically threatened to expel RCP members for trying to hand out leaflets about Avakian.

Confrontations between Black Lives Matter activists and the RCP erupted again when RevCom showed up again to agitate at the funeral of Eric Garner, another black man killed by police in New York City.

Taylor insists, however, that Refuse Fascism is its own project, distinct from the RCP. They have nothing to hide, she says.

“It only serves a repressive government for people to divide themselves and attack each other on the left,” Taylor said. “The idea of cult of personality, or skewering people without bringing substance to what we’re confronting, is part of a snark culture that’s very destructive.”

On Saturday, though, it’s not typical leftist infighting Refuse Fascism has to worry about. It’s members of the far-right, who are hotly anticipating an armed anti-fascist uprising, fueled by fake news, potentially locked and loaded.

In the lead-up to Refuse Fascism’s Nov. 4 protest, the far-right media machine has been in full spin, revving up fringe groups and warning of an oncoming antifa massacre.

A viral video released in mid-September, titled “Officer Warns: Antifa To Declare Civil War On Whites Before Year End,” is just the the latest chapter in a recent narrative popular in the far right of a violent overthrow of the United States government. In it, a supposed police officer sits in a patrol car, speaking to a mounted camera.

“They are fundraising for weapons,” he says in the video. “They will start by attacking police officers. They will then go after the citizens, the people, the government and all of that.”

The video was shared over 55,000 times on Facebook to a reach of over 3 million. The claims made in the video about the Nov. 4 protests — such as the idea that “if you’re white, it will be open game on you” — aroused thousands of comments promising retributive violence.

“Honestly, if our leaders and our leadership isn’t going to step up and finish this, we have to,” the unnamed officer says in the video.

As J.J. McNabb, a journalist and author who studies anti-government extremists, put it: “Fake news sites are going to get people killed.”

Taking the bait from parody tweets, the far-right website Gateway Pundit reported that “millions of antifa super soldiers will behead all white parents” on Saturday. Famous conspiracy theory hub Infowars, which reported that antifa plans to “wreak havoc in major cities across the U.S,” released a promotional film to purchase a commemorative T-shirt they designed just for the occasion.

And the physical menacing has already begun. In Berkeley, white supremacists visiting town in September for far-right provocateur Milo Yiannopoulos’ canceled “Free Speech Week” showed up day after day to the local Revolution Books storefront to harass the staff and demand to be let in, even as security guards tried to physically eject them and volunteers for a local animal rights center stepped in to defend the bookshop from potential violence.

“If you allow yourself to be intimidated by fascist liars and threats, you’re basically saying go ahead, have the future,” Taylor said. “And then you’re throwing away the lives of Muslims, immigrants, women and people all over the world. That can’t be allowed.”

Taylor is unmoved by both the violence and the skepticism on the left. She refers me to the the recent January protests, when 2.3 million South Koreans took to the streets in the days before the impeachment of President Park Geun-hye. That kind of revolutionary groundswell is possible here, she insists, and nothing short of that will suffice.

“In America, it’s deeply in their culture that politics is something you leave to someone else, or if that if you’re really upset, you should write a letter,” Taylor said. “What we’re saying is ‘No, we have to be the one.’ The civil rights movement wasn’t people begging and writing letters. It was people changing their whole life to stand in the way of the horror of great injustice.”