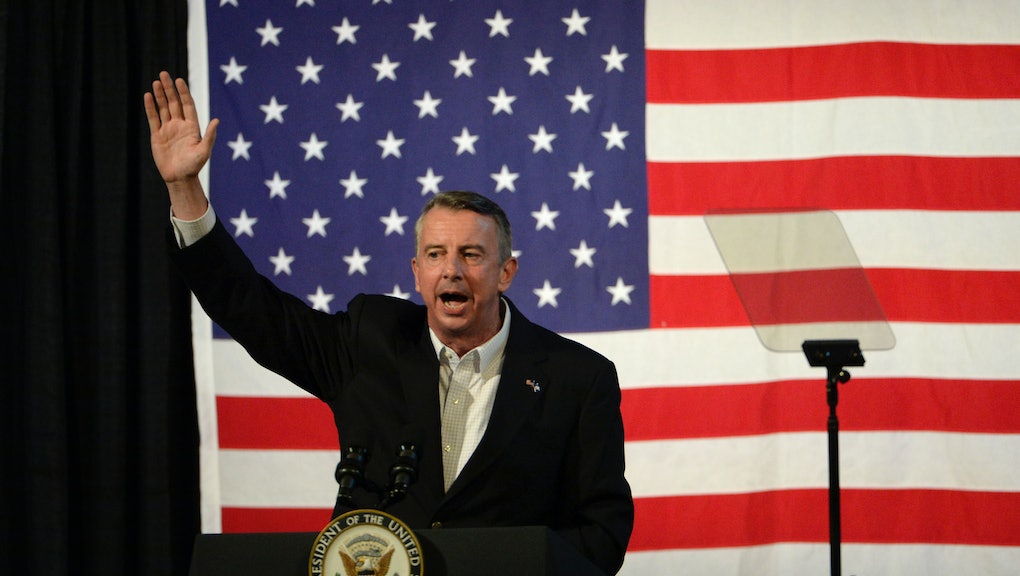 The Virginia governor’s race turned “ugly” on Monday, according to Mediaite, when the Latino Victory Project PAC released an attack ad against Republican candidate Ed Gillespie.

The minute-long video depicts children of different nonwhite racial backgrounds — including a black boy, a brown-skinned Muslim girl, a Latino boy and a Southeast Asian boy— getting chased through an idyllic neighborhood by a white man in a pickup truck waving a Confederate flag and sporting a “Gillespie” bumper sticker.

“Is this what Donald Trump and Ed Gillespie mean by the American Dream?” the voiceover narrator asks, as images of the August white supremacist rally in Charlottesville, Virginia, play across the screen.

Wall Street Journal columnist Kimberley Strassel called the ad “appalling” on Twitter, and was retweeted by hundreds, including New York Post columnist, CNN contributor and “self-styled tribune of Trump country” Salena Zito. Their implication, along with Mediaite’s, was that the video crossed a line, dragging the race’s political mudslinging to a new and unacceptable low. None of them deigned to address how ugly Gillespie had already made the race — or how honest a depiction of his campaign the Latino Victory Project ad truly was.

Proof is easily accessed. Two of Gillespie’s attack ads against Democratic opponent Ralph Northam stand out when trying to parse which voters the Republican is pandering to. The first takes a page from the playbook of President Donald Trump. It ties undocumented Latino immigrants to the Los Angeles-founded street gang MS-13, and claims that one of Northam’s past votes for policies that limit local cooperation with the federal government in enforcing immigration law makes him an enabler of their violence. The ad is filled with images of heavily-tattooed young Latino men, clearly intended to invoke fear.

The second ad panders even more explicitly to white hostility. It criticizes Northam for saying he will “do everything [he] can” to remove Confederate statues at state-level locations in Virginia. Gillespie, in contrast, says he will fight to keep the statues up — though his ad avoids naming the rebel cause outright, instead referring to the statues as “Civil War monuments.” This is the same dispute that prompted hordes of white supremacists to march on Charlottesville over the summer in favor of keeping a statue of Gen. Robert E. Lee erect.

“I’m for keeping them up,” Gillespie says, direct to camera. “And [Northam is] for taking them down. And that’s a big difference in November.”

In light of these ads, Gillespie’s platform can reasonably be interpreted as white supremacist. Fear mongering around nonwhite criminals is a political tactic at least as old as George H.W. Bush’s Willie Horton ads in 1988. The very construction of Confederate monuments was an attempt to rewrite Civil War history to valorize the Confederate cause — and more important, to signal continued white dominance to recently emancipated blacks.

“The fact that [the monuments] were placed on the grounds of county and state courthouses was intentional,” Karen L. Cox, a professor of history at the University of North Carolina at Charlotte, told PolitiFact in August. “The message: White men are in charge.”

Disingenuous conservatives — like those outraged over the Latino Victory ad — decline to understand that aggressive immigration crackdowns and Confederate symbols have almost always spelled real violence against people of color in the United States. A truck bearing these symbols chasing children is less a race-baiting smear than the logical conclusion of actual policies. That those policies define the campaign of the GOP’s Virginia gubernatorial candidate is not Latino Victory’s fault. And rather than treat the ad as grounds for pearl-clutching offense, perhaps conservatives should interrogate why their candidates align themselves with racist causes to begin with.