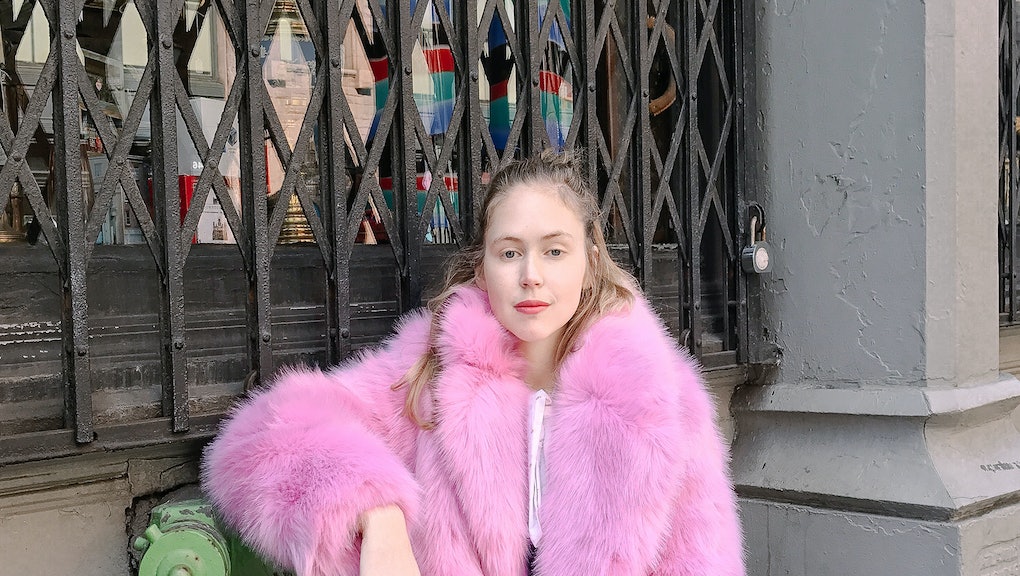 I am a self-proclaimed macromalist. I want maximized silhouettes, frills, big — no, huge — shiny bows. I want fifty shades of pink, layers of ruffles and all things that sparkle. I want over-the-top. More is more.

The school of minimalism was the only fashion school I followed during my early years. But as I grew up, I realized that this school felt so foreign, and wrong, when being mixed in with my other beliefs. The ones my fiercely feminist mother, as well as the society around me, had been teaching, and preaching, since before I even knew how to spell the word: that was feminism. As I became older, I fully realized the contradiction those two posed. Feminism and minimalism don’t go hand in hand. In fact, I think they choke each other.

In a country where half of the parliament seats are held by women, where parental leave is mandatory for both parents, and where every 16-year old is given a copy of Chimamanda Ngozi Adichie’s “We Should All Be Feminist” on their first day of school, the signature fashion aesthetic for women is minimalism (or, as Merriam-Webster defines it, “a style or technique that is characterized by extreme spareness and simplicity.”

Minimalism is also an aesthetic and a movement that emphasizes masculinity; using straight lines and a lack of curves, volume or bright colors — anything one would typically associate with femininity. It has furthermore, and maybe not coincidentally, been a design and art movement that’s been dominated by men and celebrated in art, architecture and fashion for over half a century.

And even though there is nothing wrong with traditionally masculine dressing for women, there are lot of bad-ass women who have conquered and carried out this aesthetic in the most powerful of ways (look at Georgia O’Keeffe, Katherine Hepburn and Patti Smith). And even though I also love a straight line from time to time, there is danger when an entire nation — a nation championing women and women’s equality at that — makes minimalism its signature aesthetic for women, and for men, but the ideal that it represents is a threat unique to women.

It sends the message, subconsciously or not, that we can be treated equal to men, as long as we dress like them. We have been allowed into the board rooms, the court halls and onto the senate floors, but we won’t be taken seriously unless we also dress on men’s terms. Maybe it is a way for patriarchy to still steadily stay in its static place, to show women that it’s still a “man’s world,” even if we have been allowed into it. And maybe it is because feminine shapes, curves and colors threaten the very existence of the minimalistic male world that’s been allowed to exist without any frilly, pink or glittery interruptions for so long.

And with this masculine, minimal ideal for style, also often comes the masculine, minimal ideal for what a woman’s body should look like. This body should have little to no curves and should also preferably be flat-chested. Anything that would hint at a feminine curve should be subdued and pushed in. I’ve taped my boobs to look rightfully minimalistic in white and grey layers of oversized cotton and wool – and I have many friends who have done the same thing. In 2015, a Swedish guy I dated told me, “You’re such an Acne Studios girl, I like Acne Studios girls.” That same fall, the Acne Studios campaign model was a 12-year old boy modeling the new womenswear collection.

I never thought about or criticized this ideal or aesthetic until now. But in the aftermath of the 2016 American election, in the age and the land of Trump and the heightened threat and newly refueled hate, oppression and attack on women’s rights and women’s bodies, I started to feel disgusted by my own taped boobs, the straight lines of my shirts and my motherland’s minimalistic claim to fame. An ideal which seems to have become the norm for “cool girls” all around the world in recent years.

That’s why I needed a new word — and a new style. That I decided, was “macromalism.” It’s time for women to be more, not less, to reclaim pink, frills, glitter and all other things “girly” and “feminine” (and thus, oftentimes, frowned upon) as our power suit. Our shield and weapon towards misogyny – wherever we may find it. From the courtrooms and the classrooms to the architect offices and cool-kid art parties in Bushwick, macromalism is the ultimate “fuck you” to patriarchy — and the lifeboat that will save us from drowning into the sea of male minimalism.

I have been told all of my life to be less. To take up as little space as possible (why do you think our culture worships the skinny ideal for women more than almost anything?), to minimize myself and stay quiet. To be a macromalist is to speak out and sparkle loud through fashion, and fashion has always been on the forefront of big movements in history.

The macromalistic shift has been seen on the runway, too, recently, with brands like Gucci stepping out on forefront of celebrating bows, pink and maximized silhouettes for several seasons now. And during the SS18 ready-to-wear collections, macromalism seemed to have overpowered minimalism for the first time in almost a decade. This can be seen in the well-established fashion houses, such as Marc Jacobs and Alexander McQueen. Even Acne Studios, the God of Swedish minimalism, had models walking down the runway in pink jackets, sequined pants and pastel dresses with oversized, ruffled hemlines.

And even more so, it’s noticeable in the collections of the up-and-comers, whose work often is a preview of in what direction fashion is heading. Laurence Li and Chico Wang, the design duo behind fashion brand Laurence & Chico, are a prime example of this macromalistic future.

Their designs have, since their inaugural collection in 2015, been focused on maximized silhouettes, humongous shiny bows, glitter everywhere and layers of ruffles. “Our lifestyle is all about surrealism, and our girl is tired of everyday black and white mundane attire. She wants something special that sparkles.” they said in an interview. “One of the most liberating things a girl can do is wear exactly what she wants to wear, when she wants to wear it, and not care about other people’s opinions.”

Sometimes taking up space physically can be an incredibly powerful way to not become quieted, especially when sitting in a room full of people who are trying to make you do the complete opposite. Macromalism is a way for women and girls to do that, to shatter some glass ceilings, or at least make frail minimal masculinity chew at its own layers of black turtlenecks and $300 Japanese cotton. When they go low, we go high. I have learned that the best way to face men who want to shut you up, is to shout louder, and that fashion sometimes can shout louder than words can. I have learned that when they try to make you invisible, your best weapon is to become more visible – and invincible in the process.