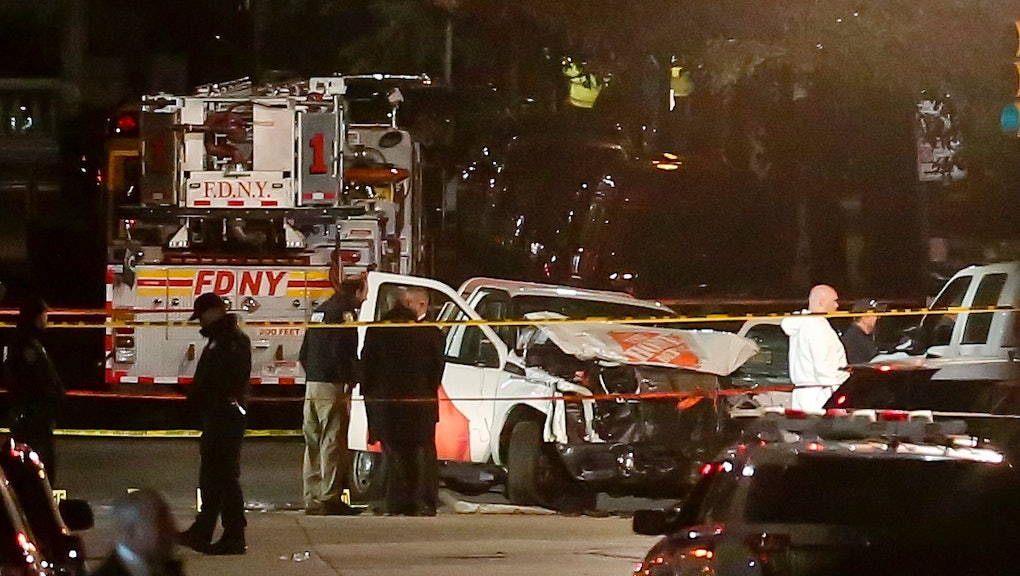 Vehicular attacks like the one in New York City are on the rise. Here’s why.

Eight were killed and several others injured in New York City on Tuesday in the latest example of what’s become an increasingly common mode of terrorism: vehicular attacks.

A driver plowed through a Lower Manhattan bike path in a Home Depot truck in what is apparently the deadliest terror attack in New York since 9/11, according to authorities. Sayfullo Saipov, 29, of Tampa, Florida, was identified as the suspect.

There’s been a major spike in such attacks in recent years, according to an analysis published in August by NBC News and the Global Terrorism Database. The attacks have claimed lives across continents, and most prominently in the Middle East, North Africa and Europe — including in high-profile attacks this year in Barcelona, Spain; Stockholm; and two in London. The United States has not been as impacted by vehicular attacks as other regions, though a woman was killed and several others injured in August when a driver plowed through a crowd of people protesting a white supremacist rally in Charlottesville, Virginia.

Victor Asal — chairman of the department of public administration and policy at University at Albany, State University of New York, and the co-director of the Project on Violent Conflict — said in a phone interview Wednesday that terrorists have turned to vehicular attacks recently because they are difficult to defend against.

“It’s very, very hard to protect against this,” Asal said. “They don’t take a lot of planning. ... They’re very hard to identify beforehand and check somebody on.”

With vehicle attacks, a terrorist doesn’t need a gun or explosives — they just need to pick the right place at the right time.

The Transportation Security Administration issued a warning over vehicular-ramming attacks in May, CNN reported then. Bollards — heavy posts that keep cars from driving up onto pedestrian areas — have been cited as an effective way to prevent such attacks.

But according to a report from the Counter Extremism Project, while “far more can be done” to reduce the threat of vehicular attacks, there are only so many protective measures cities can take.

“Although we cannot prevent each and every vehicular attack, efforts to prevent even a few attacks can have the foreseeably large impact of reducing widespread fear and, most importantly, saving lives,” the report read.

The rise of vehicular attacks

Vehicular attacks have evidently been on the rise since about 2014.

But according to Asal, the 2016 truck attack in Nice, France, demonstrated the power such attacks could have.

In that attack — which was claimed by the Islamic State group, also known as ISIS — 86 were killed and more than 400 were injured when a suspect, identified as 31-year-old Mohamed Lahouaiej Bouhlel, plowed through a crowd during a Bastille Day celebration.

“Terrorist attacks go on the rise when they seem to be effective,” Asal said. “Nice was kind of a marker.”

There’s been a “tremendous upswing” in such attacks over the past few years, Asal said, and they’ve given rise to what he calls the “inspired lone wolf” — people not affiliated with any organization, but motivated by their ideology.

Saipov, the suspect in Tuesday’s attack in Manhattan, was reportedly possibly inspired by ISIS, but as of Wednesday did not have known ties to the terror group. He is said to have shouted “Allahu Akbar” after exiting his vehicle and displaying imitation firearms before being shot and wounded.

The FBI’s Joint Terrorism Task Force is leading the investigation.

President Donald Trump tweeted Tuesday that “we must not allow ISIS to return, or enter, our country” and that he had instructed his Department of Homeland Security to “step up our already Extreme Vetting Program.”

“Being politically correct is fine, but not for this!” Trump tweeted.

Asal emphasized that Muslims should not be conflated with the extremists who carry out such terror attacks, saying that when we “aggregate these things, we discriminate.”

“They’re not the same thing,” Asal said. “When we discriminate in that way, we’re doing exactly what the terrorists want.”