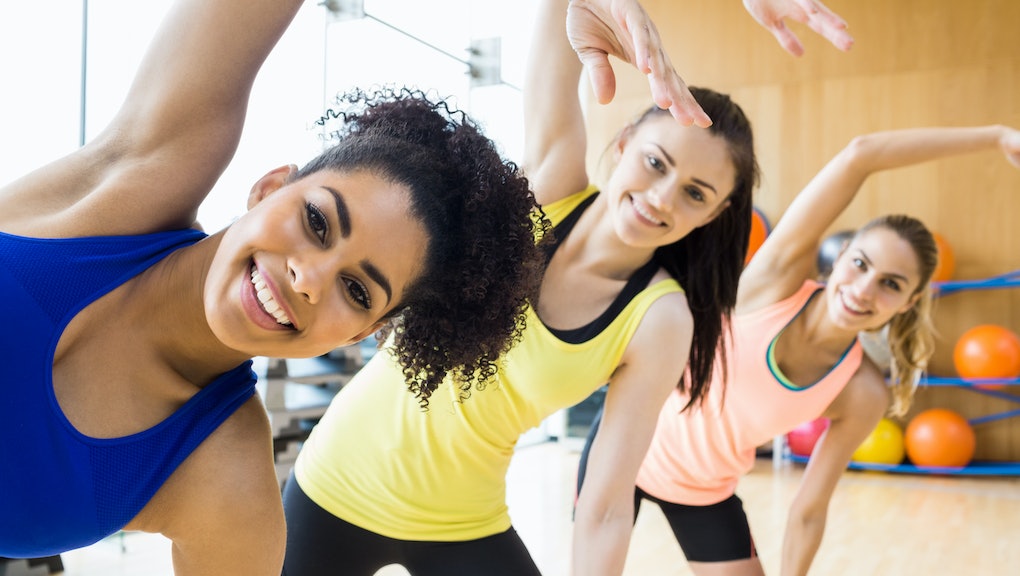 Stressed? Taking a fitness class is way better than going to the gym alone.

Sorry to be that annoying, guilt-tripping friend nagging you about the benefits of exercise, but here we are.

If you, like the majority of Americans, believe we are in the “lowest point in our nation’s history,” a new study about the stress-relieving effects of exercise will be of interest to you and all your equally anxious friends. In fact, the results of this study, published in the Journal of the American Osteopathic Association, indicate that exercising in a group fitness class is way more effective at relieving stress than other forms of working out.

The study followed 69 medical students — “a group known for high levels of stress and self-reported low quality of life,” according to the news release —from the University of New England College of Osteopathic Medicine, all of whom sorted themselves into one of three groups. The first group took group fitness classes at least once per week. The second group engaged in regular exercise — like lifting weights or running — alone or with up to two friends. The third group did not engage in any exercise beyond walking or cycling as a means of transportation.

Throughout the course of the 12-week study, participants in each group tracked their stress levels using a self-evaluation test. Those who participated in the group fitness classes had much lower levels of stress — 26% lower than the baseline — when compared to the other two groups.

“The communal benefits of coming together with friends and colleagues, and doing something difficult, while encouraging one another, pays dividends beyond exercising alone,” Dr. Dayna Yorks, the study’s lead researcher, said in a news release. “The findings support the concept of a mental, physical and emotional approach to health that is necessary for student doctors and physicians.”

So, next time you’re white-knuckling your nightmare rectangle when Trump posts a new tweet, don’t bury yourself in Chinese food, tempting as it may be. Try calling up your pal for a Zumba class instead.