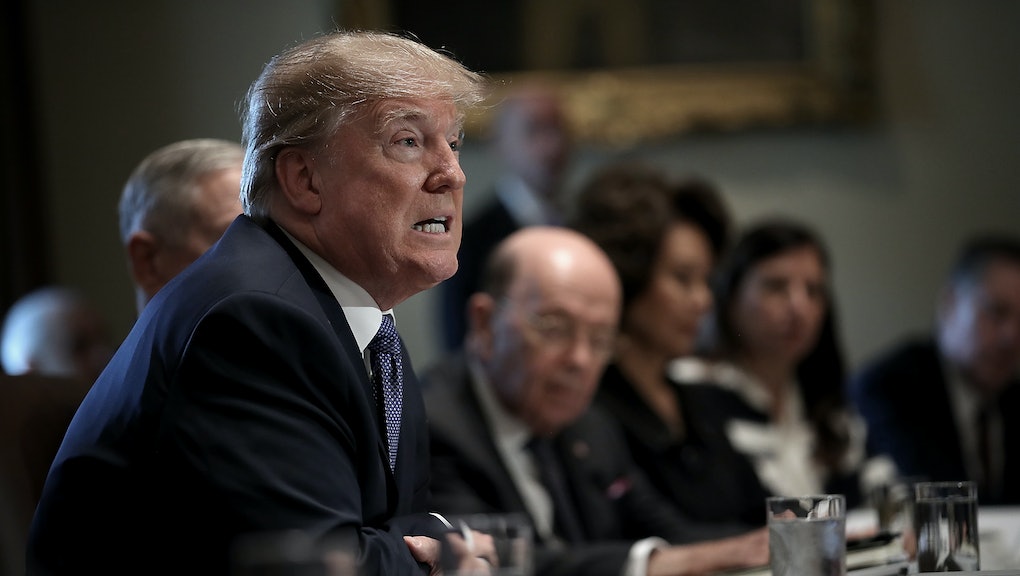 On Wednesday night, President Donald Trump tweeted that the man suspected of killing eight people on a crowded Manhattan bike lane should receive the death penalty — a move that some worried could complicate future legal proceedings.

“NYC terrorist was happy as he asked to hang ISIS flag in his hospital room,” Trump wrote in a rare late-night tweet. “He killed eight people, badly injured 12. SHOULD GET DEATH PENALTY!”

The tweet closely resembled comments Trump had made earlier that day at a cabinet meeting, which the White House had quickly sought to clarify.

“The point he was making today, he supports, or would support, that, but he wasn’t necessarily advocating for that,” press secretary Sarah Huckabee Sanders told reporters.

By Thursday morning, Trump had dialed back his position considerably, tweeting that he would “love to send the NYC terrorist to Guantanamo but statistically that process takes much longer than going through the federal system.”

But the damage might already be done — and Trump of all people should know that, because he’s gotten in trouble for this kind of thing before.

It’s a widely known but unofficial rule that presidents shouldn’t weigh in on the guilt or innocence of a defendant, because of the influence their high seat holds. A declaration of guilt, for example, could sway the public’s inherent bias, making jury selection far more difficult down the road.

There’s also ample historical precedent for this exact type of scenario. In 1970, Richard Nixon made an off-the-cuff remark at a press briefing that Charles Manson was “a man who was guilty, directly or indirectly, of eight murders without reason.”

The comments later spurred defense attorneys to move for a mistrial, with Manson lawyer Paul Fitzgerald telling reporters, “If we’re going to have the chief executive of this nation categorically or uncategorically speculate on people’s guilt, we ought to abandon this court system. Maybe President Nixon in a news conference ought to determine whether these people are guilty.”

Trump’s predecessor, former President Barack Obama, also toed the line in 2009 when he appeared to prejudge the suspected Sept. 11 terrorist Khalid Sheikh Mohammed as guilty, saying that he wouldn’t find it “offensive at all when he’s convicted and when the death penalty is applied to him.”

Obama, who practiced as a lawyer before his presidency, quickly walked back the comments.

“I’m not going to be in that courtroom,” he said. “That’s the job of the prosecutors, the judge and the jury.”

And although he has only held the office of the president for less than a year, Trump himself has also run afoul of the legal system in the past, with comments pertaining to the trial of accused army deserter Sgt. Bowe Bergdahl.

In early 2017, lawyers for Bergdahl argued that comments Trump had made on the campaign trail about the former soldier being a “dirty rotten traitor,” — and an accompanying pantomime of a firing squad executing him — were grounds to dismiss the charges against their client. (Though a military judge called the comments “troubling,” he ruled that they weren’t enough to dismiss the case.)

Trump’s calls for the death penalty weren’t his only response to the Halloween violence — the deadliest instance of alleged terror New York City had seen since Sept. 11, 2001.

On Wednesday, the president also announced the suspension of the Diversity Visa Lottery Program, which the suspected attacker, Sayfullo Saipov, had allegedly used to obtain a visa and emigrate to the United States from Uzbekistan in 2010.

“We are fighting hard for merit-based immigration, no more Democrat lottery systems,” Trump tweeted. “We must get MUCH tougher (and smarter).”