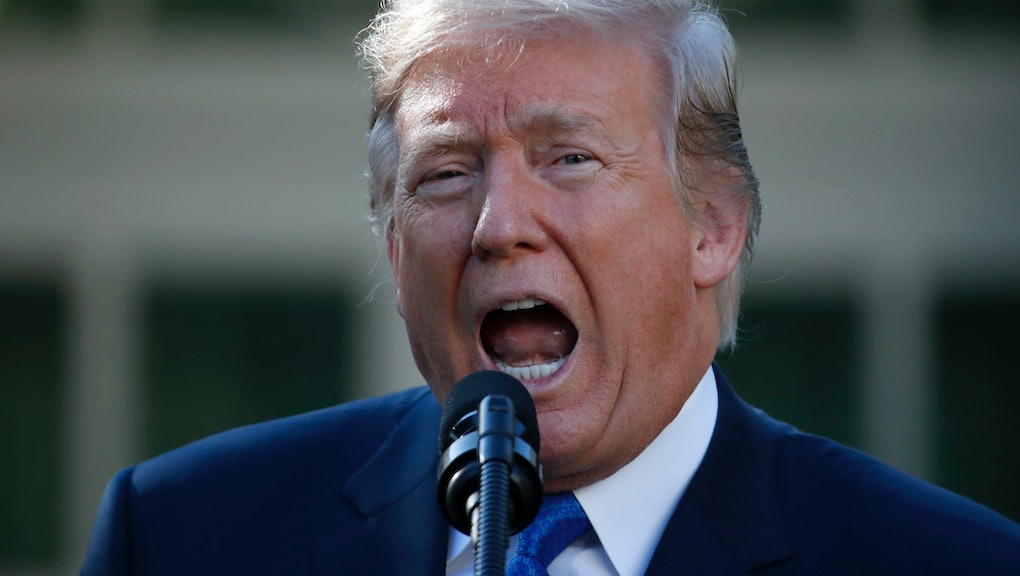 President Donald Trump is back with a bang on Twitter after being briefly booted by a rogue Twitter employee.

In a Friday morning Twitter tear, Trump threatened Hillary Clinton, jabbed Bernie Sanders and Elizabeth Warren and condemned the “Degenerate Animal” who killed eight and injured several others when he drove a rented Home Depot truck onto a bike path in New York City earlier this week.

First, he again took issue with the fact that he is being investigated but “Crooked Hillary” is not, tweeting that “at some point the Justice Department, and the FBI, must do what is right and proper.”

“The American public deserves it!” he tweeted.

After the election, Trump said he would not attempt to investigate Clinton because she’d already “suffered greatly,” but by the summer — mired in the ongoing Russia scandal and with his agenda stuck in the mud — he was back to calling for the Department of Justice and the FBI to go after his former rival.

He has since suggested that she was actually the one who colluded with Russia — not him.

On Friday morning, he again raised accusations of collusion against the Democrats, saying that an explosive campaign retrospective by former interim Democratic National Committee chair Donna Brazile in Politico Thursday showed Clinton had stolen the Democratic primary from “Crazy Bernie!”

Brazile wrote in the excerpt from her upcoming book about the campaign that Clinton’s team had essentially run the financially-strapped DNC. Sen. Elizabeth Warren (D-Mass.), whom Trump frequently mocks as “Pocahontas,” told CNN on Thursday that she believes the primary was rigged against Sanders in Clinton’s favor.

After attacking Democrats, Trump then shifted to the Islamic State group, also known as ISIS, which on Thursday claimed responsibility for the truck attack in Lower Manhattan on Tuesday. Trump described suspected terrorist Sayfullo Saipov as a “Degenerate Animal” and said that the United States has gone after the terror group “much harder” in the days since the attack.

The tweets came as Trump gets ready to head out on his tour of Asia — and the morning after his account was mysteriously deleted for several minutes in what turned out to be the work of a “rogue” Twitter employee on their final day of work.

Trump kicked off his eight-part Twitter opus Friday by acknowledging the temporary suspension, saying it showed that his “word must finally be getting out — and having an impact.”