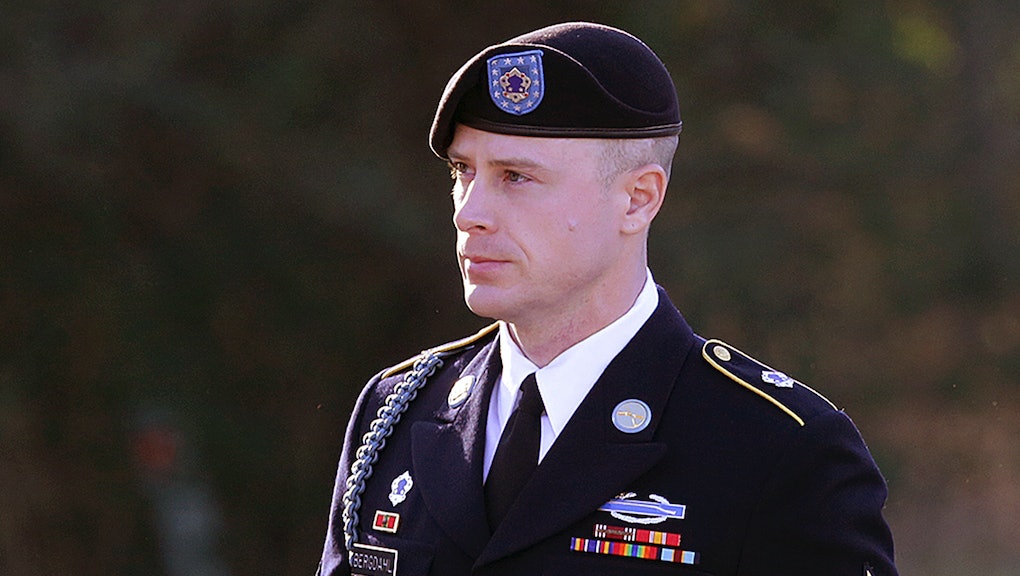 Bowe Bergdahl won’t serve jail time. Here’s why he was on trial in the first place.

Sgt. Bowe Bergdahl was sentenced Friday on charges of desertion and misbehavior before the enemy, with the former prisoner of war avoiding jail time but receiving a dishonorable discharge from the military.

As part of the sentence, under which Bergdahl initially faced life imprisonment, Bergdahl was demoted from sergeant to private and will have to pay a fine of $1,000 per month for the next 10 months. His case will also be reviewed by Gen. Robert Abrams, who may reduce but not increase Bergdahl’s sentence, the Washington Post reported.

Friday’s sentencing brings to an end the years-long saga of Bergdahl’s 2009 decision to abandon a military base in Afghanistan, as his desertion and release — which was negotiated by former President Barack Obama — sparked controversy and outrage from critics.

The most notable critic of Bergdahl’s desertion is President Donald Trump, who criticized Bergdahl on 45 separate occasions between April 2015 and July 2016, according to the Boston Globe.

Following Bergdahl’s sentencing, the president took to Twitter to decry the judge’s decision, calling it a “complete and total disgrace to our country and to our military.”

Trump might be partially to blame for Bergdahl’s lack of jail time, however. Bergdahl’s legal team pointed to the president’s attacks as cause for dismissing the case, though the request was ultimately denied. But Col. Jeffery R. Nance, who sentenced Bergdahl, said he would consider Trump’s repeated comments about Bergdahl as “mitigation evidence,” which weigh in favor of a more lenient punishment.

But what caused Bergdahl to be charged in the first place? Here’s what to know about the events leading up to the high-profile and emotional trial.

Bergdahl’s trial centered on the soldier’s June 30, 2009, disappearance from his Army base in Afghanistan’s Paktika Province, near Pakistan. According to the New York Times, Bergdahl left sometime after midnight carrying “a soft backpack, water, knives, a notebook and writing materials,” though he left his military weapons at the base.

It is still unclear whether he intended to permanently desert the military, the BBC noted. Bergdahl — who reportedly had a history of wandering off from his post and later returning — claimed he intended to go to a different base approximately 14 miles away to complain to a high-ranking official about his unit’s poor leadership, Maj. Gen. Kenneth Dahl, the Army general who led the investigation into Bergdahl’s actions, said during the trial.

Bergdahl’s decision to leave his assigned post caused the soldier’s charge of desertion, which carries a maximum sentence of five years in prison, dishonorable discharge and loss of pay. Bergdahl pleaded guilty to the charge, saying he understood that “leaving was against the law.”

During the trial, witnesses for the defense pointed to Bergdahl’s mental state to explain his desertion, with forensic psychiatrist Dr. Charles Morgan testifying that Bergdahl has “schizotypal personality disorder,” a mental illness similar to schizophrenia, in which Bergdahl “experiences an ongoing commentary in his mind.”

Dahl, similarly, claimed during the trial that Bergdahl’s upbringing in rural Idaho caused him to have “idealistic and unrealistic expectations of people,” later saying he didn’t “believe there is a jail sentence [for Bergdahl] at the end of this process.”

Misbehavior before the enemy

The more serious charge Bergdahl faced, however, was misbehavior before the enemy, which prohibits members of the military from running away, abandoning military property or “through disobedience, neglect or intentional misconduct endanger[ing] the safety of any such command, unit, place or military property.” The charge can carry a death sentence, though Bergdahl faced a maximum sentence of life in prison.

In addition to leaving his military base, Bergdahl came under fire for the consequences of his decision to leave, which put his fellow soldiers in harm’s way. A soldier who was stationed on the same base as Bergdahl during his disappearance wrote in an article for the Daily Beast that “daily search missions” took place in the wake of Bergdahl’s disappearance across Afghanistan.

“I believe that Bergdahl also deserves sympathy, but he has much to answer for, some of which is far more damning than simply having walked off,” the soldier, Nathan Bradley Bethea, wrote. “Many have suffered because of his actions: his fellow soldiers, their families, his family, the Afghan military, the unaffiliated Afghan civilians in Paktika, and none of this suffering was inevitable. None of it had to happen.”

Bergdahl claimed he did not realize the impact his disappearance would cause.

“At the time, I had no intention of causing search-and-recovery operations,” Bergdahl said during a September hearing, according to the Associated Press. “I believed they would notice me missing, but I didn’t believe they would have reason to search for one private.”

Bergdahl was captured by the Taliban within hours of leaving his base and was held in captivity and tortured for years until his 2014 release. He was the only U.S. prisoner of war in Afghanistan, the BBC noted.

Negotiations for Bergdahl’s release began in 2012, with Qatar mediating talks between the Taliban and U.S. officials. Bergdahl was ultimately released in May 2014 in exchange for five Guantanamo detainees.

The circumstances of Bergdahl’s release, however, were decried by many of Obama’s critics, who claimed the swap breached a law requiring Congress to be given 30 days’ notice before the release of Guantanamo Bay detainees. They also pointed to the exchange as a violation of longstanding U.S. policy to not negotiate with terrorists.

“I am eager to learn what precise steps are being taken to ensure that these vicious and violent Taliban extremists never return to the fight against the United States and our partners, or engage in any activities that can threaten the prospects for peace and security in Afghanistan,” Sen. John McCain (R-Ariz.) said in a statement at the time, calling the released detainees “hardened terrorists who have the blood of Americans and countless Afghans on their hands.”

“We have consulted with Congress for quite some time about the possibility that we might need to execute a prisoner exchange in order to recover Bergdahl,” Obama said in 2014. “We saw an opportunity and we were concerned about Bergdahl’s health. We had the cooperation of the Qataris to execute an exchange and we seized that opportunity.”

Regardless of the circumstances surrounding Bergdahl’s capture, Obama said, “We still get back an American soldier if he’s held in captivity. Period. Full stop.”