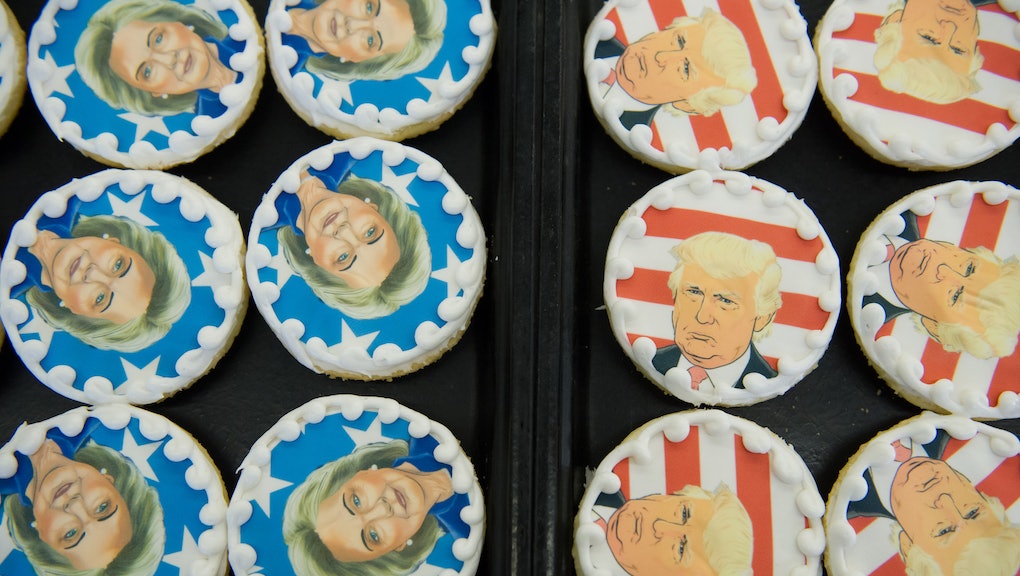 The 2016 election ended a year ago, but no one, especially Trump, seems to have noticed

It’s been just over a year since Donald Trump stunned the nation by winning the Electoral College over Hillary Clinton to ascend to the highest office in the country.

Yet if you went into a nuclear fallout shelter the day before the election and emerged a year later, you’d have no idea the election had ever ended.

Trump and the conservative media that seeks to boost his presidency are still attacking Clinton as if she were still a candidate — calling for even more investigations into her campaign and tenure as secretary of state, despite the fact she’s no longer a candidate and doesn’t plan to be in the future.

And Democrats are still litigating the Democratic primary between Clinton and Sen. Bernie Sanders that ended nearly two years ago, when Clinton clinched the nomination.

It’s an intra-party battle that Trump is all too excited to glom onto as he tries to change the subject from the federal investigation into his campaign’s potential Russian ties, which has already led to the indictment of two of his former top campaign aides, as well as a guilty plea from another.

Days before the one-year anniversary of his win, Trump was tweeting about the Democratic primary the same way he did months earlier, when he was trying to court disgruntled Sanders supporters to his side.

“Bernie Sanders supporters have every right to be apoplectic of the complete theft of the Dem primary by Crooked Hillary!” Trump tweeted on November 3, reprising his nickname for Clinton.

It’s a tweet that would make the average user look twice to check what date it was really sent, as it looked nearly identical to his tweets from 2016 commenting on the Democratic primary.

Aside from focusing on the Democratic primary, Trump’s other favorite pastime is calling for Clinton to be investigated and prosecuted whenever bad news emerges about he and his own administration’s behavior.

On Oct. 29, as the country waited for Mueller to announce the first indictments, Trump went on a tear, questioning why the Department of Justice wasn’t looking into controversies around Democrats that he and his supporters ginned up.

“Never seen such Republican ANGER & UNITY as I have concerning the lack of investigation on Clinton made Fake Dossier (now $12,000,000?), the Uranium to Russia deal, the 33,000 plus deleted Emails, the Comey fix and so much more,” Trump tweeted. “Instead they look at phony Trump/Russia ‘collusion,’ which doesn’t exist.”

Trump went on to say “DO SOMETHING!” — seeming to suggest the Justice Department investigate his political opponents.

And as the fallout from Mueller’s indictments continued — leading to yet another one of his political nominees to withdraw over the Russia scrutiny — Trump sent multiple tweets expressing frustration that the FBI was investigating people surrounding him and not Clinton.

“Everybody is asking why the Justice Department (and FBI) isn’t looking into all of the dishonesty going on with Crooked Hillary & the Dems,” Trump tweeted.

While it’s not true that “everybody” was asking that question, it’s certainly what conservative media outlets like Fox News were asking.

Clinton has been one of Fox News’ favorite subjects during Trump’s first 10 months in office.

That’s especially true for Sean Hannity, who tries to change the subject to Clinton whenever Trump is in hot water.

The night Mueller announced his indictments, Hannity got himself into such a frenzy over trying to change the subject to Clinton that he made a Freudian slip, falling her “President Clinton.”

But what is clear is that Trump doesn’t seem to want it to.

Clinton is his favorite, and easiest, foe to attack, and his shrinking base still eats up the storyline.

Until that changes, America will likely continue to re-live the 2016 campaign.