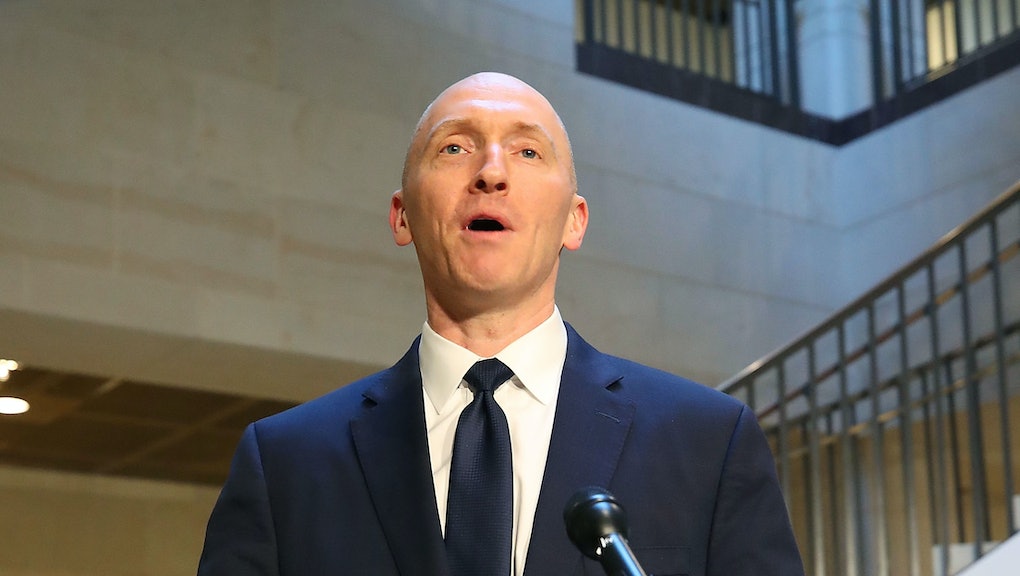 Remember Carter Page? Turns out he met with Russian officials after all.

Carter Page — a Trump campaign foreign policy adviser — told the New York Times Friday that he met with high-ranking Kremlin officials in 2016, contradicting previous statements in which he said he’d only met with Russian citizens he’d “known for over a decade.”

What’s more, Jeff Sessions and other high-level Trump staffers were aware of his July 2016 Russia trip, Page told CNN’s Jake Tapper, raising questions about statements the attorney general has made under oath during high-profile testimonies on Capitol Hill.

Page on Thursday told the House Intelligence Committee that he’d met with “government officials, legislators and business executives during his time in Moscow” — and informed a Trump campaign official of the meetings in an email, according to the Times.

One of the Russians was Deputy Prime Minister Arkady Dvorkovich, he told CNN Friday.

The revelation comes days after former Trump campaign chairman Paul Manafort and his associate, Rick Gates, surrendered themselves to the FBI after being charged with conspiracy against the United States and 11 other counts by special counsel Robert Mueller.

They each pleaded not guilty.

George Papadopoulos, a former foreign policy adviser to the campaign, plead guilty to making false statements to FBI agents and has apparently been cooperating with Mueller’s investigators, according to documents unsealed the same day as Manafort and Gates’ indictments.

The White House has dismissed the charges against Manafort and Gates as being unrelated to their campaign activities and downplayed Papadopoulos role on the campaign.

But Papadopoulos had made other, more senior Trump officials aware of his meetings with Russians, and publicly represented the campaign several times during the race — indicating that he was a more significant figure in the campaign than the administration has let on.

The revelations about Page’s Moscow meetings are some of the most direct connections between the campaign and the Kremlin yet — and paint an unflattering portrait of a campaign and administration that can’t, for some reason, get its story straight on Russia.

As the Times pointed out on Thursday, both Trump and Sessions have definitively stated that they were unaware of any campaign staffers who had been in contact with Russia.

But the special counsel’s office says that Papadopoulos discussed his Russian connections at a “national security meeting” in Washington, D.C, with Trump and Sessions in March 2016, according to court documents unsealed Monday.

Trump “listened with interest,” according to the Times, but Sessions “vehemently” railed against Papadopoulos’s offer to broker a meeting between the candidate and Russian President Vladimir Putin.

Sessions was also told of Page’s trip to Moscow, though the former foreign policy adviser said that he merely mentioned the upcoming meetings in a “brief comment” to the then-Alabama senator.

“It was such a nothing event,” Page told CNN, echoing Donald Trump Jr.’s characterization of his July 2016 meeting with a Kremlin-connected attorney. “It’s totally in passing. It was nothing.”

Trump listed Page — an unknown in foreign policy circles — as one of his advisers in a March 2016 interview with the Washington Post, but downplayed his role on the campaign after it was revealed in April that he had been targeted by Russian spies.

But in May, the president seemingly changed his tune, suggesting in a tweet that Page could prove the Russia investigation is nothing more than a “Witch Hunt!”

Page confirmed he met with Dvorkovich, but when Tapper on Friday asked him to name the “others” he had contact with, the ex-Trump adviser demurred.

“You know, it’ll come out,” Page said. “Things keep leaking in this.”